Caligula's Lighthouse: A Border Crisis, 40 CE Content from the guide to life, the universe and everything 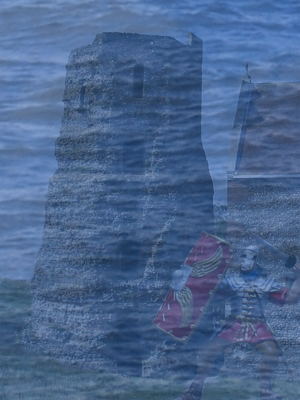 Gaius Caesar Germanicus1, better known as Caligula (12 CE – 41 CE), the Roman emperor named after footwear2, was fairly popular when he first came to power. Gradually, however, the populace came to the conclusion that Caligula was dangerous. His enemies list was too long. He stole money. His sexual behaviour was beyond scandalous. Worst of all, he was nutty as a fruitcake.

One of the nuttiest things Caligula ever did was to manufacture a border crisis and apply a ridiculous 'solution' to it. Here's what historian Suetonius had to say:

That's pretty clear. Oh, wait: let's have it in English.

At last, as if resolved to make war in earnest, he drew up his army upon the shore of the ocean, with his ballistae and other engines of war, and while no one could imagine what he intended to do, on a sudden commanded them to gather up the sea shells, and fill their helmets, and the folds of their dress with them, calling them 'the spoils of the ocean due to the Capitol and the Palatium.' As a monument of his success, he raised a lofty tower, upon which, as at Pharos, he ordered lights to be burnt in the night-time, for the direction of ships at sea; and then promising the soldiers a donative of a hundred denarii a man, as if he had surpassed the most eminent examples of generosity, 'Go your ways,' said he, 'and be merry: go, ye are rich4.'

Caligula's dad, Germanicus, had been a big war hero. As a child, Caligula was proud of his little army boots. As an emperor, he wanted to be a military leader, too. He declared war on the ocean. It was a great attention-getting moment. He even held a triumph to celebrate. Romans liked military parades.

Caligula said he did, but was it fake news?

Where Is the Lighthouse?

Caligula brought home spoils from his campaign against Neptune: a lot of seashells. He also left behind a lasting monument: a pharos, or lighthouse. If he built this lighthouse near his camp, it was somewhere on the Rhine estuary near Lugdunum Batavorum5, the military fort and granary where the assault on the ocean took place in 40 CE. Today this territory belongs, not to the Romans, but to the Netherlands. The nearby town is called Katwijk. And there's no ancient lighthouse there, although archaeologists have found a couple of kegs of wine from Caligula's personal vineyard. (Can't go to war without wine.)

So where is the lighthouse? Under water, probably.

The people of the Netherlands have a much longer-standing war with the sea than the emperor Caligula. About one-sixth of the country's land mass has been reclaimed from the ocean, and only half of its land is more than one metre above sea level. In the area where Caligula had his war, the sea appears to have won. At least, there's no Roman lighthouse there.

But was there? There's a clue in local lore. As late as the 16th Century, fishermen around Katwijk called a set of underwater ruins 'Callo's Tower'. Historians think this may have referred to Caligula's lighthouse. They don't know, because the last time anybody saw the ruins of Lugdunum was in the 16th and 17th centuries, when unusually low tides made them visible and somebody took – okay, drew   – a picture. But they didn't see a lighthouse. It's assumed that the waves have washed away the remnants of yet another narcissistic dictator's hollow bid for immortality.

1It was common for names of male Roman citizens to consist of the praenomen, nomen, and cognomen. 'Gaius' was his first name, 'Caesar' his family name, and 'Germanicus' his cognomen, from his father. 2'Caligula' was the nickname given to him as a child by his father's soldiers and means 'little army boot'. It was affectionately meant, though he got tired of it. 3Quoted from Gai Suetoni Tranquilli De vita Caesarum, edited by Joseph B Pike, 1903.4Translation from Lives of the Twelve Caesars, translation by Alexander Thomson (1796), Revised and corrected by T Forester, Esq, AM, nd5Not to be confused with the better known Lugdunum in Gaul, which is now the city of Lyons, France.