Loriot - Caricaturing the German Soul Content from the guide to life, the universe and everything 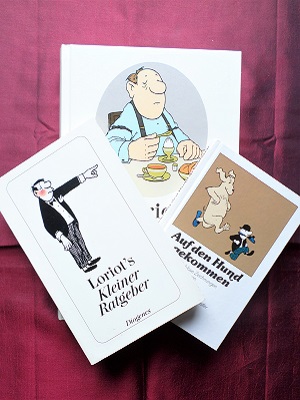 Loriot, known to most Germans as a dignified elderly gentleman in a suit, was one of the most popular personalities in Germany during the late 20th Century. Like nobody else he was able to hold a mirror to the German soul, depicting all the larger and smaller problems of life.

Loriot taught the German audience that men and women just don't fit together, that a malfunctioning TV set must not dictate their bedtime, how to prepare a perfect hippopotamus in red wine sauce, that people do not want to hear the political opinions of dogs on TV, and that any woman should have something for herself when the children are out of the house - like, for instance, a yodelling diploma.

Loriot was born in 1923 as Bernhard Victor Christoph Carl (Vicco) von Bülow to a family of Prussian military officers. He showed a talent for arts and theatre quite early. After doing his 'Notabitur'1 in 1941 he had to join the military and was part of the German invasion of Russia. After the war Loriot studied painting and graphics in Hamburg. He graduated and started drawing for commercials, which he continued to do throughout his life.

From 1950 Vicco von Bülow worked as cartoonist, inventing his typical cartoon character: a well-dressed man with large nose. He also adopted the artistic name of Loriot, which he took from his family's heraldic animal: the golden oriole, a singing bird - called loriot in French.

Loriot started to draw a series of cartoons for the German Stern magazine, but it ceased after only a few issues because readers were shocked by the contents. The series depicted the life of large dogs and their human friends, which they walked on leashes. The humans in question were all identically dressed in pinstripe suits and bowler hats and generally acted like dogs, while the added commentary often held some truths about real human behaviour. As Loriot could find no German publishing house to publish a book of these cartoons, he turned to the young Swiss publishing company 'Diogenes', with which he worked for the rest of his life. They brought out his book 'Auf den Hund gekommen: 44 lieblose Zeichnungen' ('Gone to the Dogs: 44 Uncharitable Drawings').

During the 1950s Loriot published several books with cartoons and short texts, mostly helpful 'advice' for various situations of everyday life. Pictures and commentaries always form an inseparable unity and only function together. While the drawings are anything from absurd to banal, the text always has a very serious or even dignified tone.

During the late 1960s and early 1970s Loriot became presenter of the TV show Cartoon, which was originally intended to showcase international cartoons. Loriot soon started to add his own works and sketches in which he played the lead role.

During this time Loriot also invented the dog Wum as a mascot of a quiz show and social lottery project on German TV. Wum's human partner was soon replaced by the elephant Wendelin and later a blue alien in a flying saucer. Together they advertised buying lottery tickets. Wum  (featuring Loriot's voice) also had the number one hit 'Ich wünsch' mir ne kleine Miezekatze' ('I want to have a little kitty cat'). The song stayed at the top of the German charts for nine weeks. Wum and Wendelin remained the highlight of the show until it ended in the early 1990s.

Between 1976 and 1978 Loriot created his most famous work. What should have been just a new version of Cartoon became one of the most legendary comedy productions on German TV. Loriot himself was writer, director and presenter of the show as well as artist for numerous cartoons.

Sitting on the iconic green 19th-Century sofa, wearing a suit and spectacles, with legs crossed and a sheet with notes in his hands, Loriot presided over the show with stoic composure. The six episodes included sketches and cartoons, many of which became famous. Loriot himself took many of the roles in the sketches. The lead female roles were played by Evelyn Hamann, whose look in the first auditions did not conform to Loriot's ideas at all, but in the end she became Loriot's long-term working partner.

'Loriot' includes famous cartoons like the unfortunate meeting of Herr Doktor Klöbner and Herr Müller-Lüdenscheidt in one bathub in a hotel bathroom ('Mit Ihnen teilt meine Ente das Wasser nicht!'/'My duck will not share the water with you!') or the difficult discussion about breakfast eggs between a husband and wife. There are also many well known sketches like the repeated attempt to film the delivery of a piano, including the more and more exhausted family and furniture movers, as well as the complete destruction of furniture in a room because a picture is hanging askew.

Certainly the best known episode of the series is the last one, which was first shown in December 1978 and is still running - as a shortened version of 25 minutes instead of 42 minutes - every Christmas on at least one German TV channel. The sketches and cartoons are bound together by the topic of Christmas at the Hoppenstedt family. Grandpa Hoppenstedt tries to buy a toy for his grandchild of unknown age and gender and ends up with the model building kit 'We build an atomic power plant'. Meanwhile mother Hoppenstedt is visited by three salesmen who want to sell her wine and vacuum cleaners ('Es saugt und bläst der Heinzelmann, wo Mutti sonst nur saugen kann') which ends in all three of them getting quite drunk. Dickie - the child - watches TV, where a cartoon man reads a contemplative Christmas poem about a forester's wife killing her husband. It all ends in a chaotic Christmas Eve with a whining grandpa ('Früher war mehr Lametta!'/ 'There was more tinsel in the past!'), a bored child, father unpacking numerous ties and mother waiting for a more Christmassy atmosphere ('jetzt wirds gemütlich'/'now things are getting cosy').

Loriot was writer, director and lead actor in two movies. He additionally played some smaller roles in them and Evelyn Hamann took over the leading female roles. Both movies can be seen as a series of sketches connected by a larger story. They were, all in all, not as well received as Loriot's TV series.

Ödipussi tells the story of 56-year-old bachelor Paul Winkelmann, ('Pussi'), who just moved out of his parents' home but is still dominated by his mother. At work in his furniture store he gets to know Margarethe. When they begin to like each other, Paul's mother is not at all happy about it (of course).

Heinrich Lohse, head of the buying department of a large company, is sent for early retirement. This comes as an unpleasant surprise for his whole family who would rather not have the father at home, especially as he tries to help his wife with housework and shopping. Certainly one of the most well known scenes is Heinrich Lohse trying to buy mustard in bulk to get a cheaper price.

Loriot had always loved classical music and opera. He used to take on roles as extras in various opera productions. Loriot also directed some operatic productions himself and tried out as a conductor on special occasions. In addition to presenting the works of others, Loriot wrote a text to accompany 'The Carnival of the Animals' by Camille Saint-Saëns and Prokoviev's 'Peter and the Wolf'. Another popular work is Loriot's 'Ring an einem Abend' ('The Ring in one evening'), which summarises Richard Wagner's Der Ring des Nibelungen in only three hours (the original work takes 15 hours and is usually presented over four evenings). In 'Loriots kleiner Opernführer' he humorously summarises the plot of 53 classical operas in only 160 pages - a work which evolved from texts he wrote for the German AIDS-Gala, which he hosted for ten years.

Loriot died aged 87 at his home in Bavaria. He left a widow and two daughters - and probably one or more pug dogs, which he had always adored. Throughout his life Loriot filled a large number of books with his texts and drawings. There are also various DVDs and CDs with his works as well as uncounted merchandising products showing his cartoon characters. Many of his sketches became legendary and some quotes got almost proverbial status in the German language. Statues showing some of his characters can be found in various places, and exhibitions showed his work.

Loriot also received a large number of awards and distinctions during his life. Due to the still-continuing absence of stone lice2 a spider was named after him.

Loriot was known by his colleagues to be very accurate in his work, especially taking care that the timing of his sketches was always perfect. His characters were never silly but always struggling to keep their posture and etiquette in situations which often drifted into the absurd. And in many families you can still hear the sentence 'This is just like Loriot!' when faced with the most absurd situation or dialogue.

1An early graduation from school during WWI and WWII, which made it possible for the military to get their hands on young men earlier than they would have if a regular graduation process had been followed.2Die Steinlaus: an endangered 'species' of louse (invented by Loriot and not found in nature) that eats stone, often damaging buildings – or even collapsing them, as shown in Loriot's tongue-in-cheek mockumentary about them. References to this animal can be found in various places like zoos or even publications like medical handbooks.