Dark Entries by Robert Aickman Content from the guide to life, the universe and everything 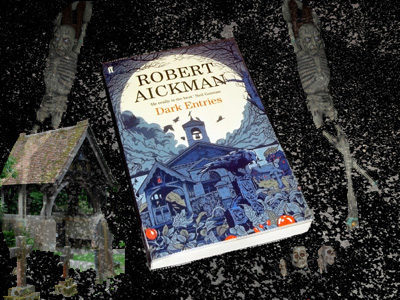 Robert Fordyce Aickman wrote 48 stories which were originally compiled into eight volumes. This Entry is a review of one of these volumes.

Aickman edited the first eight volumes of the Fontana Book Of Great Ghost Stories and, with Elizabeth Jane Howard, co-wrote We Are For The Dark, a collection of ghost stories. His father was an architect and his grandfather, Richard Marsh, wrote The Beetle, a horror story that at the time was almost as famous as Bram Stoker's Dracula. He seems to have had a strange childhood and found his father perplexing, according to his autobiography (The Attempted Rescue).

This may explain his style of writing and his dislike of childhood and children because although he married, and had an affair with his co-writer, he never had any offspring. He was a member of The Ghost Club and The Society For Psychic Research, investigating the famous Borley Rectory haunting in Essex. He was also a theatre critic and co-founded The Inland Waterways Association, which rejuvenated the British canals system. He died in 1981 at the age of 66 after refusing conventional treatment for cancer, in favour of homeopathy.

For anybody new to Robert Aickman's short stories, this collection1 may appeal and gives a good idea of his style. His stories leave both the main protagonist and reader perplexed as to where the story has gone and what really happened. MR James2, the British writer of ghost stories, by contrast makes everything clear by the end, even if the main character is perplexed by events or even killed by them. As for HP Lovecraft3, the American writer, he spells it all out for you after saying that it is all too indescribable to put into words.

The first story that kick-starts the volume is about a friendship that develops between an ordinary, middle class, girl and what we call a swot4 in the UK. The father of the latter girl seems to be a foreign academic, who inspires his daughter in her scholarly pursuits, which is not unusual in public schools. The mysterious father dies. The daughter, now an adult, returns to the family home after a distinguished academic career and the friendship is renewed. So far nothing that unusual, then the girl is knocked down by a vehicle and is expected to die. The matron of the hospital asks her to pick up clothes for her friend's hospital stay.

When she enters the building, she finds all the rooms are locked and when opened up, sparsely furnished. Eventually she ventures into the library, used as a bedroom by the father. It has bars on the window and when she draws the curtains, she catches the fleeting sight of a figure - gaunt and deathly (a recurring motif of the writer). A final revelation leaves the whole situation open-ended, which would have pleased John Carpenter, the director, as this is a style he was famous for in his films.

This is Aickman's most famous story, having been made into a BBC television film in 1968 and more recently a radio play, adapted by Jeremy Dyson (2000). It's about a honeymooning couple arriving at an East Anglian seaside town in the middle of nowhere. On arrival they hear the church bells ringing and assume it is some kind of practice session, but as they are to discover, it has a much more sinister purpose than that. The hotel where they are staying is run down and seedy; the landlord nowhere to be seen and the wife seemingly the worse for alcohol consumption. The only other guest, a permanent resident, warns them to get away as quickly as possibly. Then the bells stop and all hell is let loose.

Aickman's stories speak of a world gone by, slightly seedy and decrepit and 'Choice of Weapons' is no exception to this run-down feeling of post-war Britain. A mysterious woman at a restaurant, a frantic pursuit and a malevolent stranger; followed by a sword fight, a theft and a vampire's kiss. All this, set against a backdrop of Egyptian architecture and failed romance, rounds off the story.

In this story the main protagonist, a government official in the foreign office, takes a trip on a boat out of Liverpool. Travelling to some undisclosed island, he meets and falls in love with another passenger, who invites him to her house. During the day he paints and she goes off riding. Strange carpeting, the appearance of a monstrous figure, and the ever-changing view from his bedroom window perplexes him as the civilized world creeps in daily upon his idealized landscape of cliff and sea. Eventually that is all he sees as the town draws him back to reality and his lover vanishes. In the mirror is reflected an old and dispirited man, like a visitor to fairyland, who thought he was absent for a short time but really it was years.

This is one of his stories that baffles by its unrevealed actions and half-exposed players. Once again, as in two of his other stories in this collection, there is a male character that looms menacingly, almost inhumanly. A woman visits the home of an office colleague, to whom she is engaged, meeting some locals in a get together - including an eccentric woman who lives in a graveyard. The following day she goes for a walk in the woods, running into a herd of pigs and two strange children, plus a silent and menacing herdsman, near a maze. That night she returns, witnessing a strange and baffling procession of either naked people or fur-covered ones. If it were a stone circle, instead of a maze, you would think it was some pagan ritual but in this instance, you are not sure.

This is the shortest of the stories. It is about a traveller who misses his train connection and is forced to spend the evening sleeping in the closed station's waiting room. He seems to wake in the night to find the long-disused stove alight and himself surrounded by fellow passengers. He is then woken up for real, this time by the day porter, who tells him the other porter shouldn't have let him stay there. This, he says, is because the waiting room is built over an old prison graveyard and has an unfortunate reputation. He also tells him that he should see his doctor when he gets home as he has acquired the same nervous tick that the night porter has.

Don't be a Stranger

Aickman always referred to his writings, not as ghost or horror tales, but strange stories, and this collection displays this quality in a fresh, sharp manner. Other books in this series are published by Faber and Faber and include The Wine Dark Sea, The Unsettled Dust and Cold Hand in Mine. His original publisher for these items was Tartarus Press. Anybody interested in finding out more about Aickman may find information at the British Library, which has a section dedicated to his manuscripts and other papers. Bowling Green State University in Ohio, USA, also has a collection of his papers.

1Dark Entries, 1964, Tartarus Press.2Montague Rhodes James (1862 - 1936) was a medieval scholar based in Cambridge who wrote ghost stories to amuse his students. They were later published to great public acclaim in his native country.3Howard Phillips Lovecraft (1890 - 1937), known for his horror stories published in pulp magazines.4Someone who studies hard for exams.