Norovirus - the Winter Vomiting Bug Content from the guide to life, the universe and everything 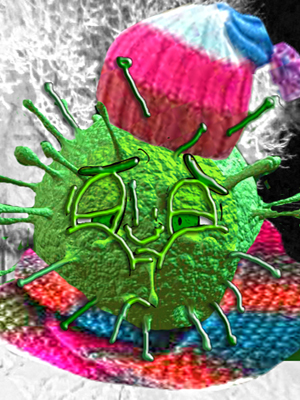 Picture the scene: you're sitting at home and feeling okay but not great, when all of a sudden you get an urgent urge to vomit and have diarrhoea simultaneously! If this happens to you, chances are you've caught norovirus.

Norovirus is named after an outbreak in Norwalk, Ohio in 1968. It is also known as 'the winter vomiting bug', although this is a bit of a misnomer. While there are more cases of it in winter than in summer, it can strike at any time. Also, while vomiting is a very noticeable symptom of the virus, the diarrhoea symptom cannot be ignored1 and you may also feel feverish for a time while the virus is working its way out of your system.

Norovirus spreads as easily as a viral headline on social media. You might breathe in the germs, for example in a room where an infected person has been (as happened in New Zealand in 1998 when one person was sick in a hotel dining room and 52 people subsequently developed norovirus). You might inadvertently transfer the germs from an infected surface to your mouth (for example by touching a door handle that an infected person has touched). Or you may catch norovirus from eating food that has been exposed to the virus (oysters often contain it, or food such as sandwiches can become contaminated by the person making them). After you have ingested the virus, it takes one to two days for the symptoms to appear.

In recent years norovirus has become notorious for breaking out on cruise ships, but is also notable for appearing in hospitals, prisons, schools and other places where a number of people have gathered. In the UK the government holds a range of information and statistics on norovirus including charts showing how the number of recorded cases varies each year.

As it is a virus, antibiotics do not help against norovirus. The main treatment is to mitigate the effects of the bug: rest well, keep hydrated by drinking water, diluted fruit juice or rehydration preparations, and eat when you feel ready for something (the bug is not specifically in your stomach, so there is no need to avoid food for any particular length of time). If you have a fever or feel achy, paracetamol or ibuprofen can be taken.

Most people should stop experiencing symptoms within 24 hours, and should recover fully within a day or so. Older people, children and people on medication or with medical conditions are more at risk of complications from the physical effort and effects of the virus, so should seek advice from a doctor.

As there is no specific cure for norovirus, prevention is the best policy. If you catch norovirus, quarantine yourself for 48 hours after you stop experiencing symptoms. If you are sick or have diarrhoea in a room used by other people, open the doors and windows to ventilate the room, and clean up any mess with disinfectant. It is important to wash your hands regularly with soap and water, and also to regularly clean surfaces that you touch, including door handles and hand rails, to help avoid the transfer of the virus.

If you become a victim of norovirus, you can take some relief in knowing that, after recovery, you will now have about two years of immunity from this acute and unpleasant bug.