Man of La Mancha: Don Quixote's Musical Journey Content from the guide to life, the universe and everything 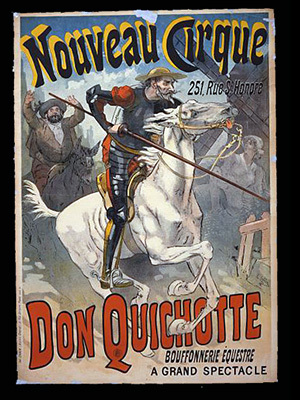 You probably know the plot of the musical Man of La Mancha: Miguel de Cervantes Saavedra (1547-1616), gadfly playwright, world traveller experienced in hardship, eternal idealist, lands in the Spanish Inquisition's gaol. Fortunately for the audience, Cervantes is accompanied by his trusty manservant and a trunkful of costumes, plus a hefty manuscript of Don Quixote. The other inmates of the gaol, political prisoners mixed in with the ragtag-and-bobtail underclass of 16th-century Spain, threaten to use the precious manuscript for fire-lighters. To save the early-modern world's most famous novel, Cervantes has to tell them the story. The prisoners act it out, to universal delight. The Inquisition shows up to put a damper on the proceedings, but who cares? We've rescued the human spirit from brutal reality.

Or rather, Dale Wasserman has. Wasserman (1914-2008), gadfly1 playwright, world traveller experienced in hardship, eternal idealist, landed in Spain one day. He was there to write a movie script, but the imaginative local newspaper ran a story that Wasserman was there to research a dramatisation of Don Quixote.

'The item was laughing-matter,' he wrote later2, 'because like the great majority of people who know Don Quixote, I had never read it.' When he'd remedied that oversight, Wasserman discovered that he was much more interested in the book's author. Not surprisingly, because they had a lot in common. Wasserman was orphaned at the age of ten. He rode the rails as a hobo, stealing books from libraries and 'returning' them to other libraries down the railway line. Cervantes was poor all his life. He spent five years as a slave in Algiers. Wasserman was Jewish, one of 14 children of Russian immigrants. Cervantes' family were conversos, descendants of more-or-less forcibly converted Jews. Suspicion of conversos led to Cervantes' run-ins with the Inquisition. Dale Wasserman discovered a similarity in their experiences – and their outlooks.

To dream the impossible dream... to fight the unbeatable foe...
- Lines almost cut from I, Don Quixote

The result of all this research? A play for television that ran once on Dupont Show of the Month, on 9 November, 19593. Wasserman wanted to call the play 'Man of La Mancha', but the network decided the viewing audience probably wouldn't understand the reference, so it became I, Don Quixote. The network also demanded that all references to the Spanish Inquisition be dropped, so as not to offend the Catholic Church. This was done.

Even without the Inquisition references, I, Don Quixote was not at all in the spirit of the tense Cold War era. Time magazine praised the performance by saying: 'Viewers and critics inclined to snicker at such idealism missed the point of a fine TV drama whose central theme was man’s eternal search for truth.'

On the other hand, actors got the message. Lee J Cobb, who played Cervantes/Quixote, told Wasserman: 'This is an important play. It flies in the face of the news, the mood... of all the crud that's a blight on living here and now. It could have a life...'

I, Don Quixote did, indeed, have a life. As Man of La Mancha.

Hail, Knight of the Woeful Countenance!
- Song from Man of La Mancha

Nobody picked up the option for I, Don Quixote as a straight play, but there was interest in turning the story into a musical. Composer Mitch Leigh eschewed the standard 'lush strings' approach to the Broadway musical, dropping the violins and sticking to flamenco guitar and brass to give the score a 'Spanish' feel4.

To write the song lyrics, the team first hired intellectual English-American poet WH Auden (1907-1973). The attempt at collaboration was a disaster. Auden's lyrics weren't singable. He wanted to stop the action mid-show, turn up the house lights, and have allegorical figures lecture the audience on consumerism. The last straw was Auden's insistence that in the end, Quixote/Cervantes must repudiate the knightly vision – not Wasserman's point at all. The playwright reluctantly gave the poet a 'pink slip'5, and lyricist Joe Darion was brought in. Darion lifted Wasserman's own phrases from the play, giving the world award-winning lyrics such as the now-immortal 'To dream the impossible dream, to fight the unbeatable foe...'

To Each His Dulcinea

There is no Dulcinea,
She's made of flame and air,
And yet how lovely life would seem
If ev'ry man could weave a dream
To keep him from despair...
- To Each His Dulcinea (Joe Darion/Mitch Leigh)

Man of La Mancha was a Broadway hit. Life magazine called it 'a metaphysical smasheroo'. It has been revived numerous times, and performed in regional theatres, as summer stock, and in schools. A film was made in 1972, starring the unlikely combination of Peter O'Toole and Sophia Loren. Tenor Simon Gilbert dubbed the singing for O'Toole. Richard Kiley, Hal Holbrook, Raul Julia, and many others have played the Knight of the Woeful Countenance. Man of La Mancha has been performed in translation in countries around the world, from China to Austria to Brazil.

When it was first proposed to make I, Don Quixote into a musical, Dale Wasserman asked a psychic he knew if this was a good idea. She replied that it was, and that the musical would be successful. 'In fact,' she said, 'it will overwhelm your life.' This was true, in a way. Although Wasserman wrote more than 75 scripts, including the play version of One Flew Over the Cuckoo's Nest6, he is remembered first and foremost for Man of La Mancha.

What attracts audiences to this musical about a mad old man's delusional system? As one critic has put it, the relevance of this modern staging of a four-hundred-year-old story is the help it offers the perplexed in today's society. 'The only way to stay sane in our contemporary world is to see the world as it could be,' wrote theatre director Scott Miller7. The two playwrights, separated by centuries, seem to have shared a common view: they knew from experience how much the suffering world needed this kind of hopeful vision. A character in Man of La Mancha says: 'I think Don Quixote is brother to Don Miguel.' It could also be added, 'and brother to Dale Wasserman.'

Interested in watching the musical, but don't have any theatre tickets handy?

Here's a full-length theatrical version of Man of La Mancha, courtesy of Youtube.

In 1966, Richard Kiley and the rest of the original cast of Man of La Mancha appeared on the Ed Sullivan Show. Here's a videotape of that event.

Image supplied by the Library of Congress

1The august New York Times called Wasserman a 'gadfly' in its obituary, so it's official.2In the Introduction to the print edition of Man of La Mancha.3The New York Public Library has the only extant copy of this performance.4Whether a Spaniard would agree with this assessment could be questioned, but North American audiences associate 'Spanish' music with the Spanish Empire's colony of New Spain. If the score of Man of La Mancha sounds more Mexican than Spanish, that's why.5US slang for giving him 'the sack'.6From the novel by Ken Kesey.7In Inside Man of La Mancha, excerpted on the website of the Barrington Stage Company of Pittsfield, Massachusetts.