Sword Drill: Militant Activity in the Church Basement Content from the guide to life, the universe and everything 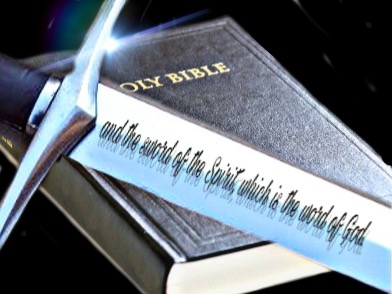 If that quotation doesn't bring back memories, then you don't know what a Bible Sword Drill is, so we should tell you about it. This peculiar educational activity flourished in Baptist churches, particularly in the US, in the middle of the 20th Century. We also want to allay fears, such as those once expressed by a concerned Quaker parent in Meeting: no actual edged weapons are involved in this exercise. The worst injury sustained was a paper cut.

The Sword Drill, an educational game that involved a race to look up Bible verses, was an unusual application of something the Apostle Paul wrote in a letter a long time ago:

Stand therefore, having your loins girt about with truth, and having on the breastplate of righteousness;
And your feet shod with the preparation of the gospel of peace;
Above all, taking the shield of faith, wherewith ye shall be able to quench all the fiery darts of the wicked.
And take the helmet of salvation, and the sword of the Spirit, which is the word of God.
– Ephesians 6: 14-17, Authorised Version1

No, the Apostle Paul was not referring to the King James Bible when he wrote that. How do we know? Because James I hadn't been born yet. In fact, printing hadn't been invented yet. Paul was probably talking about the work of the Holy Spirit, not a text. His extended armour metaphor probably owed more to the ubiquity of armed Romans in towns like Ephesus than to any desire to see children brandishing Torah scrolls at unbelievers. Paul wasn't really advocating the weaponisation of the Bible. This task was left to later centuries.

How to Sword Drill

The kids with the most points at the end of the class would get...hmmmm. I never remember any prizes, come to think of it. Bummer.
– 'Buck', 'Growing Up Southern Baptist', blog, 11 December, 2005

Oddly, the origin of the Sword Drill is shrouded in mystery. No, not because it's a secret: more because it never occurred to anybody to document its beginnings. The closest we can come to figuring out who to blame for this quasi-martial manoeuvring in the church basement is a passing reference by a church official in Arkansas in 1910, who claimed that the Sunday School pastime was invented in his state. This would make sense, in an odd way: a generation whose childhood memories included armed soldiers drilling with real swords could have passed the metaphor on to their offspring. One thing is certain: references to sword drills in Baptist newsletters are quite frequent by the 1930s.

A sword drill proceeds as follows:

Competitive people can keep score, though this is not very Christian. In fact, it was the competition aspect that worried the Quaker in Meeting, rather than the military analogy. Baptists are less worried about such things than Quakers, and Baptists have been known to have regional championships in Sword Drill.

It was considered fatal to invite an Episcopalian [Anglican] to church on Sword Drill night because they'd lose for your team.
– Charlotte Hays, When Did White Trash Become the New Normal?, 2013

What You Need for a Sword Drill

The sine qua non of the Bible Sword Drill is the Sword Drill Bible. A proper Sword Drill Bible has a sturdy pasteboard cover whose edges do not extend beyond its pages. This makes searching easier. The Sword Drill Bible also has thick pages, the better to avoid tearing by over-eager youngsters. The ones offered for sale in the 1950s and 1960s usually had the image of a sword and shield on the front cover, along with the quotation, '...and the sword of the Spirit, which is the word of God.'

To be good at a Sword Drill, of course, you need to know the books of the Bible. Most Sword Drills are conducted using modern (not 1611) editions of the Authorised Version, meaning no apocryphal books. It is important to memorise them in order as they are presented in the book, if you want to have a, er, fighting chance in a Sword Drill. Mnemonic aids have always been available, frequently in 'musical' form. This Youtube gem is not only the most modern, but absolutely the worst mnemonic list of the Bible books This Researcher has ever heard.

The Sword Drill is alive and well in churches today – not only in the United States, but also abroad. However, it's usually called 'Bible Drill', and seems to have lost many of its militant trappings. This is probably just as well. Our young people can continue to use their Bibles for friendly competition – and, hopefully, read something edifying – without necessarily wanting to go to war. It is only a matter of time before the game goes electronic: we can't wait for the first all-digital Sword Drill.

1There is a reason for quoting Scripture in the Authorised, or 'King James' version. For well over half a century, no one who participated in Sword Drills would have considered using any other translation.