The Bombing of Guernica Content from the guide to life, the universe and everything 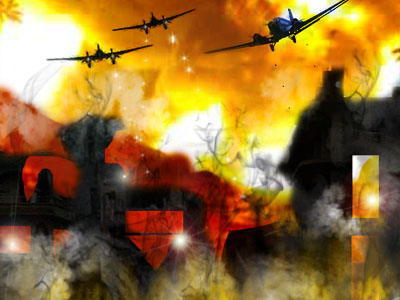 The bombardment of Guernica took place in 1937. It is not only one of the bloodiest chapters of The Spanish Civil War, it has also been called the first example of modern warfare. Two people helped define this tragedy as an anti-fascist and anti-war icon; the British/South African journalist George Steer and the Spanish artist Pablo Ruiz Picasso.

The Bombing of Guernica was one of many mass murders that happened during the Spanish Civil War. Throughout the 19th Century, the Spanish army had often interfered in politics when their interests were at risk. The summer of 1936 ended with a coup d'etat. The army was part of the conservative establishment and was against the reforms that the government, a left-wing coalition that had just won the election, had promised to carry out. The military uprising was led by General Amado Balmes (1877-1936), General José Sanjurjo (1872-1936), General Emilio Mola (1887-1937) and General Francisco Franco (1892-1975), who established a dictatorship at the end of the war in 1939.

The Bombing Of Guernica

Guernica, Guernika-Lumo in Euskera, is a town in the province of Biscay in the Basque Country, Spain. It is located 30km east of Bilbao at a strategic point for communications.

On 26 April, 1937, there was an aerial attack that lasted more than three hours. About 30 tons of bombs were dropped. The villagers ran in panic, seeking shelter, only to be machine-gunned from the attacking planes. The bombing wiped out most of the population and the buildings; everything was devastated except the Errentería Bridge and some arms factories.

Civilians were the target. Creating horror through devastation was the plan of mastermind Colonel Wolfram Von Richthofen, a Nazi official that would plan other similar attacks, known as blitzkrieg, on Poland and France.

According to historians, Guernica was a place to try the deadly power of the Nazi war machine. They had been bombing towns and machine-gunning civilians around Spain, but not to such a degree of devastation. The German Condor Legion, supported by Aviazione Legionaria, the Italian air forces, carried out the destruction. This was commanded by the Francoist army, who had committed a coup d'etat on 18 July, 1936.

The planes took off from Vitoria, a nearby town, flew towards the coast and came back to the village so that Guernica was bombed throughout. There were three types: Heinkel 111 and Junkers 52 bombers, and Heinkel 51 ground-attack aircraft that machine-gunned civilians. There were two groups of about 20 aeroplanes that acted alternately. First they dropped explosive bombs, then bunches of little incendiary flaming bombs, while at the same time the other planes machine-gunned the panic-stricken population. As well as Guernica, nearby villages also suffered during the attack.

There was a pact among European countries to avoid participating in the Spanish Civil War. However, Germany, Italy and Portugal broke it. When the legal Spanish government asked for international help, only Russia offered it.

Winston Churchill was against the Non-Intervention Pact. He knew that it was a war struggle between ordinary people and the establishment that caused the Spanish Civil War but he could also see the threat of fascism, and that was the real problem. However, Churchill was a powerless lone voice in Parliament at the time and unpopular with his own party.

The Spanish Republican government was not backed because of its left-wing policies. The European establishment thought that it would be backing Communism and left Spain alone.

George Steer was a war journalist. After covering the Italo-Ethiopian War1 (1935-36), he was sent to Spain. In 1937 he was at the French-Spanish border. He reported on the destruction of Irún and Durango, two towns near Guernica. His reports also informed on refugees, who were flooding towards France, and on the progressive advance of Franco's troops.

George Steer and other journalists arrived at Guernica at night. The town was still burning. The fire did not stop until several days later. All of them were shocked by the horror. Steer stayed in Guernica longer than the rest. On 28 April his report was published in The Times and in the New York Times. The reported atrocity showed that a new horrific kind of modern warfare had started.

The report had an important political impact. It echoed in the British Parliament; main international newspapers, leading religious figures in Britain - all were asking for action, many regretting the Non-Intervention Pact.

Soon, George Steer was on the blacklists of Francoists and Nazis. Both accused the Spanish Republican army of causing the massacre. The Nazi propaganda said that the report was part of a Jewish-Marxist operation. The alleged 'proof'? Times spelt backwards is 'Semit'.

Picasso read Steer's report in the Communist French newspaper L'Humanité. The impact of those words would become the Guernica painting.

Picasso was working on a mural for the International Exhibition of Paris. He changed his mind and painted the Guernica. He, as did many other artists and professionals, considered that any person can change the nastiness of the world by doing the best they can in their personal sphere of work.

George Steer published The Tree of Guernica: a Field Study of Modern War in 1938. He wanted to open the eyes of the world to the perils of fascism. In order to achieve that, committed professionals are needed:

A journalist is not a simple purveyor of news, whether sensational or controversial, or well-written, or merely funny. He's a historian of every day's events, and he has a duty to his public... and as a historian must be filled with the most passionate and most critical attachment to the truth, so must the journalist, with the great power that he wields, see that the truth prevails.

In 1997, the then German president Herzog wrote a letter to the survivors. Germany admitted its implication in the air attack of 1937. There was a symbolic act of twinning between the town of Pforzheim and Guernica.

In Spain, the wounds of Guernica and the rest of Spain are still open. The socialist government of Zapatero (2004-11) passed the Law of Historical Memory (2007). The aim was to provide justice for the victims of the Francoist crimes. Most mass media in Spain are conservatives and present this law as a mistake since it only seeks to open closed wounds. However, victims claim that they do not want revenge but justice. The current conservative government ignores the law completely. They have not even condemned the coup d'etat nor Franco's dictatorship yet.

There are still many names of Francoist criminals in the streets of Spain and the fascist mausoleum where Franco is buried is kept with state funds. There are also many victims asking for a decent burial of the relatives that are in mass graves2 all around Spain.

Those Guernica survivors in the twinning act said:

We wanted, from the rubbles of what once was our village, a new flag of peace to emerge for the people of the world.

1Confusingly known both as the Second and also the Third Italo-Ethiopian War, following the Italo-Ethiopian Wars of 1887-89 and 1895-96.2Spain has the second most mass graves in the world after Cambodia. Memoria Historica is an association that helps relatives to find the resting places of their loved ones.