John Middleton - the Childe of Hale Content from the guide to life, the universe and everything 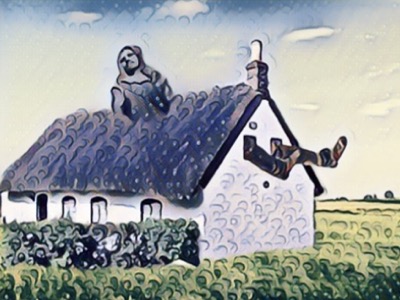 John Middleton was born in 1578 in Hale, a village near Liverpool in the UK. The child of a farmer, he transcended his humble origins and achieved fame when he grew to a height recorded as 9ft 3ins. 'The Childe of Hale', as he became known, was employed by the Lord of the Manor of Hale and even met King James I. He died in 1623.

The inscription on John Middleton's gravestone indicates he was born in 15781. He lived in a thatched cottage with his parents who were farmers.

Legend has it that one day John went to the beach near Hale Head Lighthouse on the River Mersey and drew the outline of a giant man in the sand. He lay in the outline and wished to become the same size as the outline, then he fell asleep. When he woke up, he was the giant he had hoped to be.

In fact, historians suspect that actually John had acromegaly caused by a hormone imbalance (a description of him indicated that he had a deep voice and greasy skin as well as large hands, feet, nose and lips, plus wide-spaced teeth, which would support this theory). He had reached his full height by the age of 20.

Another legend about him said that he was so tall, he could only lie down to sleep if he put his feet out through the two windows on the gable end of the cottage. This is also an unlikely story, as his true height was almost certainly less than the claim made on his gravestone, but it is an amusing explanation for why the cottage is unusual in having two small windows that look out on the road.

John's impressive stature brought him to the attention of Gilbert Ireland, the Lord of the Manor of Hale. Gilbert engaged John as a bodyguard and entertainer and introduced the Childe of Hale to the upper echelons of society. Gilbert became Sheriff of Lancashire and in 1617 he was knighted. King James I visited Liverpool to bestow the honour, and invited Gilbert and John to visit him in London.

The people of Hale were pleased that one of their number had been invited to Court and they wanted John to make a good impression so they made him fine clothes in purple, red and gold2. In London, John wrestled with the King's Champion. He dislocated the Champion's thumb and was given 20 sovereigns for his efforts.

After that, John and Gilbert visited Oxford and went to Brasenose College, which was where Gilbert had matriculated in 1578. As a sizeable number of students from Lancashire were studying there, they were pleased to meet John Middleton. His hand was traced, and his portrait was painted. The Brasenose Rowing Club even adopted a livery in the same colours as John's Court clothes.

On the journey back to Hale, John was somehow relieved of the 20 sovereigns3, so he returned home with nothing and spent the rest of his life working on farms. He died on 23 August, 1623, and the Church Register records his name as John Middleton, Childe of Hale. He was buried in the grounds of St Mary's Church.

The Childe of Hale was not forgotten, though. Samuel Pepys, the famous diarist, went to see the outline of John's hand in the cellar at Brasenose on 9 June, 1668.

The village of Hale still celebrates their famous resident, and his cottage features on the village sign. The cottage is a Grade II Listed Building that has been turned into a quaint yet modern holiday home. John's portrait features on the Childe of Hale pub sign.

A tree trunk carving, known as the Hale History Tree, was installed in Hale in 1996 depicting local landmarks including the Childe of Hale. The tree trunk rotted badly over the years, though, so it was removed in 2011. A bronze statue of John Middleton in all his 9ft 3ins glory was unveiled in 2013.

Thus, even though his fame in life was fleeting, the name of John Middleton the Childe of Hale lives on today.

1A John Middleton was baptised in Hale on 11 January, 1573, but most sources agree this was not The Childe himself.2Later to become known as the Childe of Hale colours.3It is said that the people he was travelling with either mugged him or swindled him out of the money.