RuPaul's Drag Race - the TV Phenomenon Content from the guide to life, the universe and everything 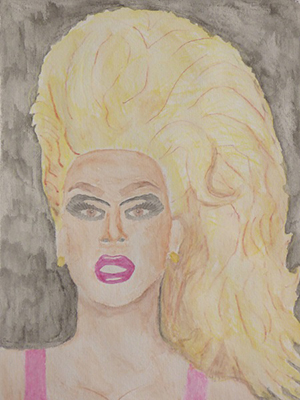 RuPaul's Drag Race is a US TV series that has enjoyed considerable success since the first series in 2009 and which has been broadcast around the world. Hosted by RuPaul Charles, famous for being a Drag Queen, singer, actor, presenter, author and producer, the show aims to find 'America's Next Drag Superstar'.

The show has inspired several spin-offs, launched the worldwide careers of many of the contestants and has attracted interest from academics. This Entry aims to provide an overview of the Drag Race phenomenon and the person who created it.

RuPaul Charles was born on 17 November, 1960 in San Diego. He studied for a time at a school of performing arts, but learned from his older sister Renatta, a model, how to work a runway. He formed a band, RuPaul and the U Hauls, and they appeared on a cable TV channel show in 1982. He also worked in clubs as a dancer, made his own costumes, and acted in low-budget horror films including the Star Booty series in which he played a supermodel-turned-superspy.

RuPaul won the title of Drag Queen of Manhattan in 1990 and obtained a recording contract in 1992. The album Supermodel of the World appeared in 1993 and the single 'Supermodel (You Better Work)' was a dance music hit, thanks to the video being played on MTV. That led to her performing in a humorous duet with Elton John - RuPaul took Kiki Dee's role in 'Don't Go Breaking My Heart'. In 1996 she hosted The RuPaul Talk Show - singer Michelle Visage was co-host. RuPaul continued releasing albums and singles, including a collaboration with Martha Wash. RuPaul started work on producing Drag Race in 2008. As 'supermodel of the world', her looks are inspired by, yet rebelling against, Barbie dolls, and she cuts an imposing figure - RuPaul is over 6ft tall and stands more than 7ft tall when wearing high heels and a big blonde wig.

Drag queens from all over the world have appeared on the show. Most are from the USA, several are from Puerto Rico, and there has even been a contestant from Australia.

A number of queens have had a difficult journey in life and through the series, and share their experiences with RuPaul on the main stage. For example, Ongina from the first series explained she was HIV positive, Monica Beverly Hillz told Ru she was a trans woman1 and Roxxxy Andrews revealed she had been abandoned by her mother as a young child - by sharing and taking ownership of their vulnerabilities, the queens became stronger. Jinkx Monsoon has narcolepsy that is triggered particularly when she is stressed, so she struggled at times to complete the demanding tasks when her body needed to shut down, but it wasn't raised as an issue on the main stage - it was mentioned most during the 'talking heads' segments where the queens commented on their own performance and that of their competitors, as Jinkx even lost consciousness at times during the interviews.

Queens are sometimes selected to provide controversy in the show. For example Shangela appeared twice, because she had only been doing drag for a few months before her first appearance in Season 2, so RuPaul was keen to see more of her when she had become more experienced, much to other contestants' dismay. Alaska auditioned numerous times, but wasn't accepted to appear on the show until after her partner Sharon Needles had been successful at her first audition for Season 4. The rivalry between fellow pageant queens Coco Montrese and Alyssa Edwards before Season 4 spilled over into the show, while the friendship group 'rolaskatox' (Roxxxy Andrews, Alaska and Detox) in Season 5 caused tension with the other queens.

Over the years that the show has been running, it has developed its own language, made up of slang and sentences inadvertently introduced by contestants as well as RuPaul's catchphrases for the show.

The structure of most episodes is similar. RuPaul appears in drag in the workroom via video link2 and then appears in person wearing a suit, announcing himself with the words 'Hello, hello, hello!' RuPaul starts the mini challenge by saying, 'Good luck - and don't **** it up' and the main challenge begins with the words, 'Gentlemen start your engines, and may the best woman win!' Contestants need to demonstrate that they have 'Charisma, Uniqueness, Nerve and Talent'. At the end of the show when someone is to be eliminated, RuPaul says, with suitable dramatic effect, 'The time has come for you to lipsync for your life!' The winner of the lipsync is told 'Chantay you stay', and the loser has to 'Sashay away'.

Can I get a amen up in here?

A common refrain is 'No Tee no Shade', where 'Tee' stands for truth and 'Shade' is negative comments - criticising or scheming competitors become known as 'shady queens'. 'Fishy queens' are the most feminine, successful performances are 'fierce' and impressive outfits are described as 'sickening'.

Contestants' catchphrases include 'Halleloo' exclaimed by Shangela, Tatianna's polite 'Thank you', Jinkx Monsoon whispering 'Water off a duck's back', and even Alyssa Edwards' tongue click.

The winner(s) of the mini challenges may gain an advantage over the other competitors, such as extra time to choose material for the main challenge, or they may become team leaders with the opportunity to choose their teams and then oversee the task as the teams compete against each other.

A recurring mini challenge is inspired by the film Paris is Burning (1990) which featured drag queens 'reading' each other (criticising others in a sharply humorous way) - the challenge is announced with the words, 'The Library is open!' and the queens wear flamboyant glasses to do the 'reading'.

Other mini challenges involve the Pit Crew - a group of muscular men who wear nothing but pairs of briefs. Most of the contestants are gay men, so they appreciate the opportunity to admire the Pit Crew while trying to play games such as sorting the Crew into pairs based on what items they have in their lunchbox.

The Main Challenge might be an individual task, such as making a dress out of curtains, or writing and performing a stand-up comedy routine. In teams, queens might be expected to choreograph a dance routine, or act in a scene from a TV melodrama.

A recurring challenge is the Snatch Game, based on TV's Match Game in which contestants and a panel of celebrities are asked a question and try to guess the same answer to score points. The queens choose their favourite celebrity to impersonate and the aim of the game for them is to be funny.

The final few competitors generally get the chance to star in a video for one of RuPaul's songs, creating a win-win situation of publicity for them and for RuPaul. The final few also get to enjoy dinner with 'Mama Ru' where they share their hopes and fears with RuPaul over a low-calorie meal-in-a-capsule.

After the main challenge has taken place, the queens are judged on the Main Stage. Alongside RuPaul there is a panel of regular judges, and they are joined by guest judges each week.

Guest judges have included women such as Kelly Osbourne, Sharon and Ozzy's daughter, and Rebecca Romijn, who is famous for playing Mystique in the early X-Men films4 and also appeared alongside RuPaul in the TV bodypainting competition Skin Wars. Representatives of the show sponsors' products occasionally appear, such as makeup artists, and advertising executives in charge of vodka sales. Chaz Bono, the son5 of legendary singer and gay icon Cher, is a popular guest judge who can frequently also be seen in the audience during the finale episodes of Drag Race.

The least shady queen is chosen by viewers and becomes 'Miss Congeniality'. The winner of the series becomes America's Next Drag Superstar and wins a substantial sum of money ($100,000 in most series) plus a supply of cosmetics and guaranteed publicity.

RuPaul's Drag Race Untucked6 is the behind-the-scenes show, featuring the queens talking (and often fighting) backstage in between appearances on the Main Stage.

RuPaul's Drag Race All Stars has a similar format to the main series, but in this case the contestants are people who appeared on previous series and who did not win but still made an impression on viewers.

Drag U (2010-12) was another spinoff that saw RuPaul and a number of professors (drag queens from earlier series of Drag Race) mentoring women in Drag University to help them become fierce divas.

RuPaul and the Drag Race phenomenon have been studied by academics7 as they provide visible insight into an often-hidden culture.

Limited Edition RuPaul dolls were made in 2005, and fetch high prices on the internet. For those with fewer dollars to spend, the RuPaul's Drag Race Paper Doll Book was released in 2017. It features 2D versions of winning queens (including Violet Chachki and Bob the Drag Queen) and a variety of outfits for them to wear.

The Dragopolis 2.0 game appeared in 2013, featuring cartoons and catchphrases of RuPaul and other well-known queens including Sharon Needles and Alaska. It requires players to shoot a bouncy ball at a pattern of rhinestones to collect all the pink gems and win the level. The game also contains a Classic mode featuring the game from the 1.0 version, where a queen has to run along a road and avoid obstacles in order to earn money to buy dresses and wigs.

RuPaul's albums and songs are able to be purchased online, as are the contestants' musical works (there is such an expectation that contestants will record their own songs that Jinkx Monsoon entitled her efforts The Inevitable Album).

1Sonique in Season 2 was the first contestant to come out as trans, but not on the Main Stage - she spoke to Ru during the reunion show after the series had finished. A number of contestants started transitioning after appearing in the show, including Jiggly Caliente and Stacy Lane Matthews. Jinkx Monsoon came out as non-binary (not exclusively male or female) in 2017.2This used to be announced with the words 'You got she-mail', but as this sounds like an offensive term for trans women, in later series it was changed to 'She done already done had herses' which RuPaul once overheard someone say and really enjoyed as a phrase.3Michelle appeared on the UK's Celebrity Big Brother in 2015, which helped to increase interest in RuPaul's Drag Race when the show was first broadcast in the UK that year.4Under her then-married name of Rebecca Romijn-Stamos.5He came out as transgender in 2009.6'Tucking' is the word for drag queens concealing their genitalia.7For example, Nathaniel Simmons (2014) 'Speaking like a Queen in RuPaul's Drag Race', Sexuality and Culture 18 p 630-648.