Shanklin Lift, Isle of Wight, UK Content from the guide to life, the universe and everything 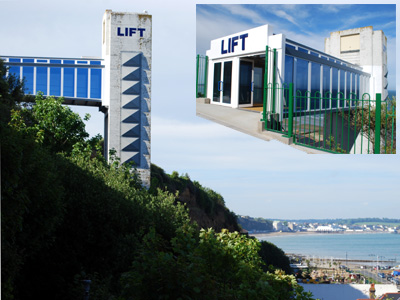 Shanklin is a charmingly old-fashioned seaside resort on the Isle of Wight. However like much of the Isle of Wight, the beach and Esplanade are at a much lower level than the rest of the town. The Esplanade is a half-mile-long seaside promenade that is just above sea-level. Here are located the usual beachside gift shops, hotels, arcades and funfair plus three crazy golf courses. The rest of the town, though, is 100-150ft above the sea, separated from the Esplanade by the sheer, perpendicular cliff wall.

To get from the bottom of Shanklin Esplanade to the main town, there are five routes in the nearby area. From south to north, these are:

No matter which way you use, to get to and from Shanklin's seafront is a bit of climb – unless you travel by Shanklin's cliff lift.

Lift: What Goes Up Must Come Down

Unlike other seaside resorts which have what they call 'cliff lifts' but are actually funicular railways, Shanklin actually has an elevator-style lift that ascends vertically to take people between the top and bottom of the cliff.

The first cliff lift was built by Sir George Newnes MP, the founder of magazines including Tit-Bits, Country Life and The Strand Magazine1. He was a strong proponent of cliff railways, constructing several seaside funiculars2. The Shanklin Hydraulic Lift was constructed in 1891 and despite the name 'hydraulic' worked on the water counterweight principle3. It was located at the centre of the Esplanade opposite the pier at the bottom, and next to the popular Keats Green at the top. Keats Green is named after poet John Keats who stayed in Shanklin in 1819, writing the sonnets On the Sea and Hyperion.

The lift was an open-framed metal structure, making it easy to see the two lift cars as they ascended and descended. The two cars were each capable of holding up to 40 passengers as they travelled up and down the 120 feet to the top of the cliff. Each car weighed 35cwt (1,778kg) when empty and up to 5 tons (5,080kg) when full. The rope used was designed to hold weights of over 40 tons. A salt water tank using seawater pumped from the sea and a fresh water tank using spring water were used for the counterweights and together these tanks could hold 30,000 gallons of water. Facilities around the lift included red-tiled waiting rooms and lavatories, as well as a National Telephone Company office from which phone calls could be made.

A guide book Shanklin Spa: a Guide to the Town and the Isle of Wight (1903) described the lift with the words:

The steep hills of Shanklin and the ascent from the shore, however picturesque they may be considered to be, rendered the erection of a lift a very desirable undertaking, and an in-estimable boon to the aged and the invalid. Placed by the side of the cliffs and firmly secured thereto, it must be admitted to be a feature marking the progress of the town and withal a very useful one, for the service is so efficient that passengers are not kept waiting for any length of time, merely the time used in the transit of the cars, whether they wish to ascend or descend. The thousands who annually use it prove conclusively how much it is appreciated, and the promenaders on the Pier or the Esplanade, who wish to be in the town in a few minutes, have but to pass the Lift Gates and to enter the saloon carriage, and they will be surprised to find how soon distance can be accomplished, by this rapid and easy mode of transit. Thus does Shanklin cater for her visitors.

At the bottom there is a very ingenious arrangement for receiving the cars, viz., Hydrostatic Buffers, which allow the cars to land ever so gently without the least vibration to the passengers. The car descends on the buffer which displaces water in a tube, so quietly, that there is no perceptible jolt, a very desirable arrangement, for which the invalid or the person with sensitive nerves will be grateful.

Tragically the lift was to be one of 11,000 buildings that were destroyed or heavily damaged during the Second World War when the structure was bombed. It would prove to be beyond practical means of repair. Having been built so strongly it took several attempts to be demolished, but the cliff lift's remains were destroyed through the use of controlled explosives in 1957.

Following Parliamentary approval, work on constructing a new cliff lift was considered a high priority for Shanklin, with the new one opening in 1958. This was a much more utilitarian design than the original. Smaller, less elegant and fully enclosed in concrete, it soon proved itself ideal for carrying passengers up and down the cliff. Built at a cost of £42,380, it opened on 17 May 1958. One of the first passengers was 86-year-old Mr Summerhayes, a former employee of the original lift company.

In early 1987 a new bridge span from the top of the cliff to the lift shaft was built and, when Shanklin Pier was destroyed in the Great Storm, the lift only suffered a single shattered window pane's damage. The lift showed itself to be extremely reliable, carrying over 82,000 passengers a year, and did not need excessive repair until 2013.

When it was realised that repairs would need to be made, to help raise the £400,000 it was believed would be needed to replace the lift motors and bridge walkway, charges for pensioners were introduced in 2014. Previously they were able to travel for free after purchasing a £2.50 travel card4.

In 2016 it was realised that almost all the original machinery from the 1950s was in need of replacement, along with the walkway. As none of the required parts for the original lift were made or stocked anywhere, an even more extensive modernisation programme than had been expected began. Only the main guide rails and counterweights remained of the motor equipment - everything else was replaced and a new computer-based electronic control system was installed, allowing the lift to be remotely monitored. New lift cars and control equipment were installed to the latest safety standards. The lift was re-wired and LED lighting was installed inside the lift shaft to make maintenance easier. The cost had risen to over £700,000 by the time the lift re-opened in June 2016. A new link bridge from the cliff top to the lift was also installed. This features large, glass windows that provide fantastic views over Sandown Bay and the beach. The new lift cars take 33 seconds to complete a journey from the Esplanade to the cliff top.

1Which famously gave the world Sherlock Holmes.2Including the Lynton and Lynmouth Cliff Railway (1890), Bridgenorth Cliff Railway (1892), Clifton Rocks Railway (1893) and Matlock Cable Tramway (1893). He also proposed the Babbacombe Cliff Railway, which was completed after his death.3A hydraulic lift uses a pump to push hydraulic fluid to a piston at the base of the lift that raises the lift car up and down while a traction or counterweight lift car ascends and descends the shaft using a counterweight to balance the load.4Prices at time of writing (November 2017) are: Adult and OAP return £1.50, Junior return £1, and disabled customers travel free.