The Love Story of Vernon and Irene Castle Content from the guide to life, the universe and everything 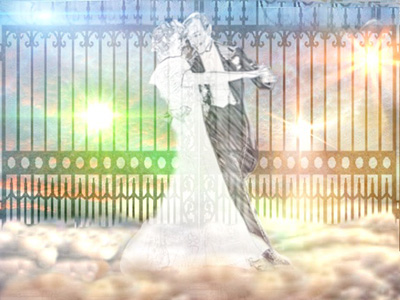 The 1939 film The Story of Vernon and Irene Castle starred Fred Astaire and Ginger Rogers. The film was based on the true story of a young couple who popularised ballroom dancing in the USA prior to World War I. In the relatively short time Vernon and Irene were together they were pioneers in many ways so their love story deserves to be told.

William Vernon Blyth was born on 2 May, 1887, in Norwich in the UK. In 1906 his older sister, an actress, obtained a role on Broadway. She went to New York and Vernon went with her. Although he had been studying Civil Engineering at Birmingham University, he took a small role in the Broadway musical revue alongside his sister. After that, he went on to achieve some success in his own right as a multi-talented actor, comedian, magician and dancer, under the stage name Vernon Castle.

Vernon met Irene Foote in 1910. She had taken roles in amateur dramatic performances and had trained as a dancer, so they had a lot in common. They married on 28 May, 1911, in New York, where they were appearing in a production together. They travelled to England as part of their honeymoon, and then went to France where they appeared in a musical revue. They secured an agent, Maggie Sutton, and were invited to be resident dancers at the Café de Paris. In 1912 they returned to the USA and took up residency in the New York branch of the Café de Paris. In particular, Vernon and Irene popularised Ragtime dancing, accompanied by the Ragtime Band Europe's Society Orchestra.

Their popularity at the Café de Paris led to further performances on Broadway, and a musical revue was written in 1914 especially to showcase their talents. This show, 'Watch Your Step' was the first stage score by Irving Berlin and it popularised the Foxtrot. The Castles even choreographed their own dance, the 'Castle Walk' - Europe's Society Orchestra made a recording of the 'Castle Walk' accompaniment for Victor Records, making them the first African-American orchestra to secure a recording contract with a major record company.

The Castles' fame spread beyond the stage - they opened their own dining-and-dancing venue Sans Souci, as well as Castle House, a dancing school, plus they offered private dance lessons and wrote books about dancing. They even appeared on film.

Following the outbreak of World War I, Vernon trained to be a pilot. He went to England in 1916 to enlist in the Royal Flying Corps and saw active service in 300 missions. He was awarded the Croix de Guerre medal for courage in 1917. He was then posted back to North America and tasked with training more pilots, first in Canada and then near Fort Worth, Texas. Having survived active service unscathed, it was even more of a tragedy that Vernon was involved in an accident at the training site. On 15 February, 1918, his plane stalled just 75 feet in the air as he manoeuvred out of the way of another plane that was on an unexpected flight path. The plane went into a nosedive and hit the ground. The other pilot, the cadet and Vernon's pet monkey survived without serious injury, but he was killed. A monument marks the spot. Vernon was just 30 years old.

Irene Foote was born on 17 April, 1893, in New York. As well as her successful stage and screen career with her husband, she was a sought-after star in her own right - in particular her fashions-inspired department store clothing lines and she featured in catalogues. When Vernon was involved with the war effort, Irene made some solo appearances as a dancer, but the couple's chemistry was missing. She was, however, invited to take the lead role in the 1917 film serial Patria (credited as Mrs Vernon Castle) and appeared in a number of other films in the same year.

After Vernon's death, she wrote a biography of him entitled My Husband that was published in 1919. On 3 May, 1919, she married Captain Robert E Treman - they had known each other in their youth as they were both from New York. Irene continued to work in films (credited as Irene Castle) until 1922. Since leaving the army, Treman had established a career as a businessman, but lost money on the stockmarket (including money that Irene had earned), so they divorced in 1923.

Irene married again in 1923. Born in 1877 in Chicago, Major Frederic McLaughlin was from a wealthy family and had also served in the army. In 1926 he became well-known as the founder of the Chicago Black Hawks ice hockey Team. Irene and Frederic had two children - Barbara born in 1925, and William born in 1929. In 1928 they founded the Orphans of the Storm animal shelter charity in Illinois, with Irene's animal-loving vision and Frederic's funding. Frederic died in 1944.

In 1946, Irene married George Enzinger, who was also from Chicago, and they moved to a farm in Arkansas in 1954. In 1959 George died. Irene continued supporting animal rights and writing her memoirs - Castles in the Air was published in 1958. She died on 25 January, 1969, and was buried with Vernon in New York. A statue of Grief, modelled on Irene and sculpted in 1918 by her friend Sally James Farnham, watches over them.

The Story of Vernon and Irene Castle was released in 1939. It was based on Irene's book My Husband and she was an advisor during the production. The lead roles were well cast, as the chemistry between Fred Astaire and Ginger Rogers was excellent to depict the story, and of course their dancing abilities were vital. Irene was disappointed that Ginger wouldn't change her hairstyle (Irene had dark hair cut in the famous 'Castle Bob' style while Ginger's hair was lighter and longer) but the main controversy in relation to the film was about the 'whitewashing' of the supporting cast.

In the film, Vernon and Irene's valet is a man with a learning disability, whereas in real life their valet was a non-disabled black man. It is also not mentioned in the film that the Castles toured with Europe's Society Orchestra, a group of black musicians. The Castles were trendsetters in more than just fashions, as this was a highly unusual situation in the USA at the time. Indeed, when the Castles were performing in theatres in New York in 1914, the musicians' union objected to Europe's Society Orchestra sitting in the orchestra pit with white musicians. Vernon and Irene solved the problem by arranging for their orchestra to sit on the stage instead. Another unusual situation was that the Castles' agent was a woman, and a woman who was openly lesbian. This is not made clear in the film, although it is obvious that the agent is a strong woman1.

Whether because of the whitewashing controversy, or because the Fred and Ginger partnership was considered to be becoming tired2, or because it was a film about war that was released in 1939, when moviegoers perhaps wanted more escapism than a reminder of world events at the time, the film was not as successful as had been hoped. However, it is still an impressive film and the ending is particularly poignant, showing Fred and Ginger/Vernon and Irene dancing off into the sunset.

1Edna May Oliver, who played Maggie Sutton, was well known for roles as acerbic spinsters - she married David Pratt in 1928 but they divorced in 1931.2The couple had appeared together in eight films before then, and this would be their last together until their final reunion in 1949.