'Vampires Rock'- the Musical Content from the guide to life, the universe and everything 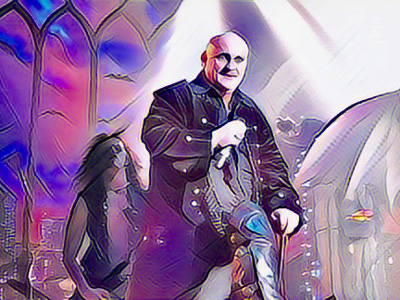 For over a decade vampires, comedy and rock anthems have combined to make the musical comedy Vampires Rock a unique theatre experience.

A huge cult following, with fans dressed to impress, has seen the stage show go from strength to strength, adding arena tours and ever more special effects. It is a truly memorable show but one that had rather humble origins.

Tonight Mathew I'm Going To Be....

Back in the 1990s Steve Steinman, the star, writer and producer of Vampires Rock, was a humble chef working in restaurants in Oldham in the north of England. Patrons apparently persuaded Steinman to audition for a popular talent show of the time - Stars in their Eyes. On the weekly show, hopefuls appeared, dressed and made up to look like their idols. Some were more believable than others.

Steinman chose to perform as a certain Mr Marvin Lee Aday - better known to most as the rock legend Meatloaf. So convincing was Steinman, he later toured and starred in the Meatloaf Story, giving a performance that was endorsed by the real life singer.

Steinman's love of rock music and his natural tongue-in-cheek humour led him to the idea of a comedy show, told through live performance rock anthems, with the whole story being centred around a vampire's search for his true love. Vampires Rock was born.

In the show Steinman plays Baron von Rockula, the son of Count and Countess Dracula.

Set in 2030 in the New York club 'Live and Let Die', the original plot sees the nightclub owner von Rockula, aided by his incompetent janitor, auditioning for a new singer at the club. Unbeknownst to one innocent young hopeful, Pandora, she will be courted by the vampire and offered a life of everlasting rock - if she will consent to be his undead bride that is!

The show mixes cheeky gags with some of the best known rock songs of all time. The story flows from track to track, each played live by the brilliant 'club' band The Lost Boys.

Although the cast has seen changes over the years, the show's run continues, with the changes becoming part of the story that the fans adore.

We Will Rock You

Vampires Rock has some serious talent. It takes on songs that are so iconic, but the band and performers more than rise to the challenge. The performance includes legendary tracks from Queen, AC/DC, Alice Cooper, Cher, Guns N' Roses and of course Meatloaf, to name but a few.

The show features gothic sets, a 'fangtastic' dance troupe and state of the art pyrotechnics, but the true lure is the mixture of music and humour that has the audience laughing and rocking in the aisles in equal measure.

Minor changes to the set have been incorporated for special arena shows, plus Christmas and Halloween gigs are always very popular with the fans.

One such change for the 'specials' was the introduction of a new character, the Baron's long suffering wife, played in style by '80s singer and TV presenter Toyah Willcox.

A revamp of the show took place in 2015, so its current format is Vampires Rock Ghost Train.

Welcome To The Jungle

Fans continue to follow Steinman's vampire tale with enthusiasm. Many audience members make a true experience of the show by dressing up in all manner of costumes, so the venues become filled with hundreds of people in sometimes spectacular fancy dress that rivals the appearance of the stars.

The show's fan base has a gallery both on social media and the Vampires Rock official website, with each gig proudly trying to out-vamp the next.

Steinman has never lost touch with those who have stayed loyal, from the personal ad-libs on stage to the cast coming out to meet the fans, sign autographs and take photos at the end of each show. As a result, the audience appears to be as much a part of the event as anything else.

So if you enjoy a laugh, love rock music and have a slightly supernatural bent, Vampires Rock Ghost Train may be the ideal evening out for you!