Seville Orange Marmalade Content from the guide to life, the universe and everything 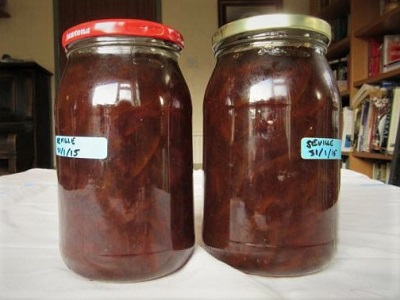 Although jam and marmalade are both fruit preserves, the main distinction is that marmalade contains the chopped peel of the fruit. As the fruit used in marmalade is very sour, the recipe needs much more sugar than most jams.

Seville oranges don't look as attractive as sweet oranges and they are too sour to eat. Their peel is thick and bumpy and they are full of pips. However, they make excellent marmalade. It would more difficult to use sweet oranges in the same way, as those don't contain as much pectin. It is best to buy organic Seville oranges, to avoid ones that have been sprayed with pesticides.

The oranges can be found in the shops in January and February and making marmalade in the coldest part of the year can be a pleasure. The kitchen fills with steam from the hot and fragrant orange mixture.

Although marmalade can be made in a big preserving pan, a pressure cooker reduces the cooking time. Don't overfill your cooker, or the mixture could bubble up and block the pressure valve.

Start by washing several glass jars and put them in the oven. This helps sterilise them and prevents them breaking when filled with hot liquid. Although some recipes suggest covering jam and marmalade with paper covers, you can use clean, close-fitting metal lids.

The quantities can be varied but keep the same proportions. Scrub the oranges and lemons. Cut the oranges into eighths, then cut the peel and flesh into fine slices. Separate out the pips and put into a muslin bag (or piece of clean fine mesh material tied carefully). Grate the lemon peel and squeeze out the lemon juice.

Put orange slices, lemon rind and juice in a pressure cooker together with half the water and the bag of pips. Check the instructions for your pressure cooker but 10 minutes would be a typical cooking time. Reduce pressure quickly. Test that peel is soft by pressing some against the edge of the pressure cooker with a wooden spoon.

Test for setting point by spooning a little of the mixture into a saucer and allowing to cool for a minute or two. Run a clean spoon across the surface – if it wrinkles the marmalade is set. Ladle into pre-heated glass jars, cover and label the jars with contents and date.