Operation Black Buck Content from the guide to life, the universe and everything 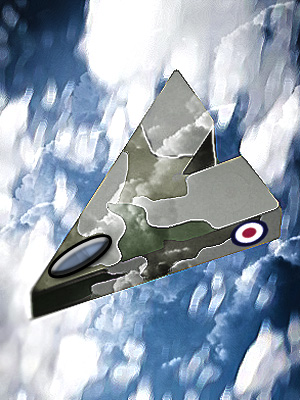 On 2 April, 1982, aiming to distract the Argentine people from the civil unrest against the military junta's economic mismanagement and human rights abuses, acting President General Leopoldo Galtieri launched an invasion of the British Territories of the Falkland Islands and South Georgia. He had gambled that the Government of Margaret Thatcher, itself unpopular in the United Kingdom, would not respond militarily to this attack on a few small islands thousands of miles from London. The gamble did not pay off.

Aside from a small patrol ship the British had no military assets in the South Atlantic, and no invasion had ever been carried out so far from a land base. Strategically, the chances of successful British military action looked limited especially for a country that had been licking its wounds since the Suez Crisis in 1956 ended its status as a major global power.

However, Thatcher saw this as a time to not only show British military power to the world, but also to cement her power base with the patriotic fervour that a successful return of the islands to British control would bring. A task force consisting of Royal Navy ships, merchant ships and converted cruise liners was sent south on the long trip to the South Atlantic. The fleet was headed by the carriers Invincible and Hermes and also included the QEII and Canberra, two of the most famous liners in the world.

While the carriers had Harrier Jump Jets, the Argentine forces could launch fighters not only from the mainland, but also from the airstrip at the Falkland Islands' capital Port Stanley. The fighter planes could attack the convoy with ship-sinking Exocet missiles from well beyond the range that the task force could hit back.

From the 1950s, the V-Force: The Vickers Valiant, Avro Vulcan and Handley Page Victor had been key aircraft in the Royal Air Force and Britain's nuclear deterrent was in their hands. When they came into service, they were some of the world's most advanced high level bombers. By the early 1980s the Valiant had been retired, the Victor was converted to a tanker, and only the Vulcan remained in use as a bomber, but even its days were numbered.

The nuclear deterrent had been handed to the Royal Navy in 1969. Their submarines could launch a devastating counter-strike from hidden positions under the waves, whereas the V-Force could be put out of action by taking out their bases in the first wave of attacks. The RAF's priorities were changing, and the future was in the hands of strike aircraft like the Jaguar, Buccaneer and Tornado which, even though they didn't have the range or capacity of true bombers, were capable of precision attacks on targets.

The V-Force's finest hour came when their combat future looked bleakest. Months from retirement, the Vulcan was called upon for one final set of missions. It was to be backed up by the Victor in what was to be one of the legendary bombing raids.

The RAF Get Ready

It looked as if the RAF would be out of this fight; its more modern planes did not have the range to reach the Falklands; a round trip from the UK was 14,000 miles. Even operating from their nearest base at Ascension Island, the Falklands were 4,000 miles away. Only the Victor had the range to reach the Falklands, but that was no longer able to act as a bomber. The Vulcan, however, could release bombs; the only problem was that it would need to be refuelled in the air, something that experience deemed too dangerous.

Adding to the worries of the military leaders, there were also concerns that the fleet's air defences would not be able to stop wave after wave of attacks from the Argentine Air Force based at Port Stanley. However, the RAF had a plan - they could send a Vulcan to take out the runway. While the complexity of such a mission would stretch conventional military logistics to breaking point, it was typical of a war that the best military minds thought Britain had little chance of winning.

Ascension Island is a small volcanic island just south of the equator, roughly midway between Africa and South America. It's part of the British Territory of Saint Helena, Ascension and Tristan da Cunha, although the main island of the territory, Saint Helena, is 800 miles away. While it is isolated, its position in the middle of the Atlantic makes it a strategic asset. Although it was a British Island, the base on the island was run by the Americans. They had set up Wideawake1 Airfield in 1943. Although it went out of use after World War II, it was put back into use in 1956 and was used by both the US Air Force and NASA.

The United States were worried that the Argentine forces would get Soviet support and, while they publicly tried to negotiate a settlement, they allowed the RAF to use Wideawake Airfield and arranged for a tanker to moor up by the island to supply the RAF with fuel.

By late April and May, Wideawake was one of the busiest airfields in the world. Not only were the Vulcans and Victors of the bombing mission based there, but so were the RAF's reconnaissance and support aircraft.

The Vulcan was the only RAF plane that had the payload to make an attack, but to reach the Falklands it would need refuelling. A lot of refuelling. And if one thing was known about Vulcans, you don't refuel them in mid-air as previous attempts had shown. Most of the equipment for air-to-air refuelling had thus been removed from the surviving aircraft. Military scrapyards were searched to find missing pieces - one vital item turned up being used as an ashtray in one of the mess halls. Then the crews had to practise not only mid-air refuelling but also precision bombing.

To train in air-to-air refuelling takes months normally, but the crews only had a few weeks while the task force was sailing south. Tanker pilots who were used to airborne refuelling flew on board to pilot the Vulcans during refuelling. However, they were used to their Victor which had a refuelling probe directly above the cockpit, whereas the probe on the Vulcan was at the end of the nose. Everything that had become second nature to the pilots was now working against them.

In addition, Vulcans had never really had to deal with accurate bombing, especially against a small target. They were nuclear bombers; all they needed to do was drop a bomb within a few miles of the target. They had a 'computing bomb sight', used to calculate the moment to drop the bombs, but it was driven by gears and cogs and it would have been familiar to Lancaster crews from the Second World War. Therefore the success of the mission was far from guaranteed.

The logistics of mounting the attack were huge - as well as the Vulcan tasked with dropping the bombs, the attack formation needed to include a reserve Vulcan and 11 Victors.

The Victors refuelled each other and also the Vulcan, returning to base when they'd used up their fuel. The first Black Buck mission on 30 April and 1 May, 1982, was not without flaws. The main Vulcan developed a leak, and so the cabin couldn't pressurise. Faced with a choice of turning back or freezing to death, the main Vulcan crew returned home, presumably to drink the drinks that had awaited the return of the reserve crew, who were only meant to travel to the first refuelling point but now had to continue the mission.

When the first of the Victors returned, it was discovered that the fuel calculations had underestimated the thirst of the Vulcan; there wasn't enough fuel in the air for the Vulcan to complete its mission.

When the crew of the Vulcan engaged with the last Victor for their final refuelling, they were unaware of their fuel consumption. When the Victor, itself short on fuel, pulled away early, the Vulcan crew were angry, thinking they'd been left high and dry by the tanker. The tanker didn't have enough reserves to make Ascension, but the crew were fortunate that another tanker had been launched to look for returning aircraft so problems were averted.

It had been decided that the Vulcan couldn't attack from low level as the bombs wouldn't penetrate the runway. The attack level had to be higher, but that put the Vulcan into the sights of Argentine anti-aircraft radar, so the plan was to approach at low level and then climb to the attack level. This was, of course, if the Vulcan managed to find the airfield at Port Stanley in the first place. Long before the age of GPS, the Vulcan was relying on navigational aids taken from an airliner for flying thousands of miles over the ocean. Visibility was limited at the low level, and both navigation aids were giving contradictory positions, so the navigator split the difference. As it turned out, when they found Port Stanley they were only a mile from where they thought they were.

The Vulcan popped up over the island, climbing to the release height and dropping 21 bombs. The first hit the runway and put the airfield out of action for fast jets, and the others damaged the planes and buildings alongside the runway, killing two people. It also meant that the Argentine Government were so worried that the mainland was also going to be targeted that they withdrew their air cover from the Falklands (attacking the mainland in the same way would have needed more Victors than were available, though). The Vulcan crew, well aware that the plane didn't have enough fuel to return to base, headed back north, hoping that a Victor tanker would be looking for them. One was.

There were another six Black Buck missions planned - one didn't take off and another had to be scrapped mid-mission, but four were completed. These caused further damage to the airfield and to a radar base, killing four people. The missions were completed on 12 June, 1982, but the Falklands War continued until 20 June, 1982.

During the whole conflict, 649 Argentine military personnel were killed, plus six others. 255 British forces were killed and three Falkland Islanders lost their lives. The South Atlantic Medal was awarded to British forces who carried out 30 days' service in the area, or took part in one sortie to the Falklands. Flight Lieutenant Withers, who piloted the reserve Vulcan that went on to complete the first Black Buck mission, was awarded the Distinguished Flying Cross. The pilot of the Victor that had refuelled the Vulcan despite being short of fuel itself, Squadron Leader Bob Tuxford, received the Air Force Cross.

1Named after the local Sooty Terns that had a very loud, distinctive call.