'Desert Bus for Hope' - Charity Video Gaming Marathon Content from the guide to life, the universe and everything 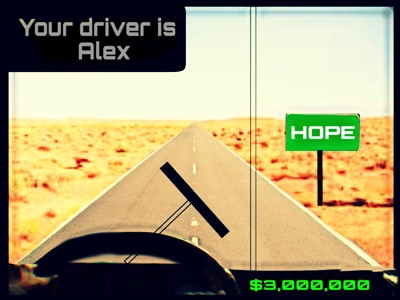 The year is 2006 and Internet comedian Paul Saunders has been reading a blog post about 'the worst video game ever made', a bus driving simulator made in 1995 but never released to the public. Saunders thinks this would be perfect material for a sketch with his Internet comedy troupe, LoadingReadyRun. At this point, he is entirely unaware that the game will become the central theme of the world's most successful Internet comedy fundraiser.

The game, Desert Bus, is a parody created by American magicians Penn & Teller as part of their never-released Smoke and Mirrors collection of minigames for the Sega CD. The Desert Bus segment simulates, in real time, the eight hour bus journey from Tucson to Las Vegas. Although the road in the game is completely straight and mostly featureless, the bus continually veers slightly to the right so that the game requires the player's constant attention. If the bus stalls or breaks down it has to be towed back to Tucson, also in real time. After eight hours the player is awarded a single point and then begins their return journey to Tucson. As with all the games in Smoke and Mirrors, Penn & Teller were trying to make a certain point. In this case, the inoffensive and bland nature of the game was intended to show that not all video games have a negative influence on gamers. They had no idea at the time just how much good the game would eventually do.

Founded by Saunders and his friend Graham Stark1 in 2003, LoadingReadyRun had achieved minor Internet fame by posting a new comedy video sketch to their website every week, without fail. The troupe had been influenced by Monty Python's Flying Circus and Whose Line Is It Anyway? but had grown up in the era of the Commodore 64, Dungeons & Dragons and Magic: the Gathering, thus making them a bunch of well-meaning gaming nerds. Based in Victoria, British Columbia, the troupe were now looking for a way to use their fame to support the video gamers' charity Child's Play2, based in nearby Seattle. LoadingReadyRun's James Turner had already envisaged a live video gaming marathon where viewers pledged donations in order to keep the games going.

It wasn't long before the troupe had decided they should play Desert Bus for Child's Play. Saunders set up a website to live-stream the event, jokingly calling it 'The First Annual Desert Bus For Hope'. At the time, every expectation was that this would be a small, one-off event. The original Desert Bus For Hope charity video gaming marathon took place in November 2007. Based in a small room and filming events on a single camera, the team had hoped to raise at least $1,000 US by playing the game continuously in shifts. They would ask for $1 for the first hour of the run, and increase that amount by 7% for each additional hour, so that $1,000 would equal a run of about 64 hours. In the end, the run lasted 108 hours and raised $22,805 for Child's Play. Though the team hadn't told Penn & Teller about their plans, by the end of the run the magical duo had each donated $500 and Teller had ordered takeaway meals for the team to keep them going.

Following this initial success, Desert Bus For Hope has grown into a yearly phenomenon. The event traditionally takes place in mid-November each year, and thanks to viewers' generosity now lasts for almost a week3. More than 40 crew members and volunteers are needed to run the event, backed by an army of 'crafters' who create unique craft items to be auctioned off or given away as prizes. Donations are encouraged through live auctions, celebrity call-ins, and the opportunity to challenge the Desert Bus team to perform various unusual tasks. Random dance breaks, musical performances and improvised comedy also feature heavily. Now billed as the world's most successful Internet comedy fundraiser, Desert Bus For Hope has so far raised in excess of $3 million for the Child's Play charity.

1Not to be confused with the Graham Stark of Pink Panther fame.2Child's Play exists to donate video games, movies and books to childrens' hospitals and domestic violence shelters.3Desert Bus For Hope 9 (November 2015) raised more than $688,000 and therefore lasted for 6 days, 15 hours.