A Walk in the Cloghoge Valley, County Wicklow, Ireland Content from the guide to life, the universe and everything 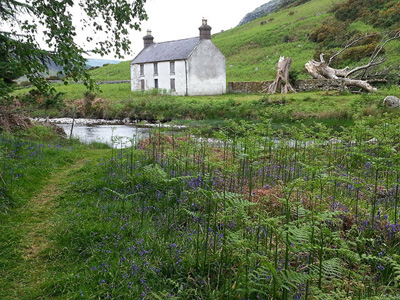 Ascent: 220m approx, including one section of 160m

The Cloghoge1 Valley is Wicklow's most beautiful entirely private valley. The Cloghoge River flows down the valley from Lough Tay to Lough Dan, the largest natural lake in Wicklow. The valley is part of the privately owned Guinness Luggala Estate. Walkers are permitted to follow the route from the entrance as far as Lough Dan (although dogs are not allowed). The valley is a beautiful, tranquil piece of farmland and forest set in a very wild part of the mountains. It has been described as 'the largest example of a fossilised 18th/19th-Century farming landscape in Wicklow, if not the country' by archaeologist Dr Chris Corlett. You won't see many signs of modern life here; you won't even be able to get any mobile phone coverage, so it's a great place to get away from it all.

This walk starts at the entrance to the estate, which is on the R759 road from Roundwood to the Sally Gap. The gates are known as the Pier Gates due to their large, cylindrical gateposts. They are at 53.103°N 6.251°W. The route goes through the estate down to Lough Dan, crosses the Cloghoge River via stepping stones and climbs up into State Forest (which is public access). It joins the Wicklow Way, a signposted long-distance walking trail, which leads back to the start.

The Pier Gates are not on any public transport route. The only way to reach them is by car. From Roundwood, take the L1036 road towards Enniskerry. After about 2km, you reach a junction with a Stop sign. Turn left here onto the R759 towards the Sally Gap. Watch out for parking places over the next stretch. After 2.2km from the junction you reach the Pier Gates, an impressive gateway on the left, with a pedestrian gate to its left. There's no parking at the gates, but there are a number of places both before and after them where cars can park. Don't leave any valuables on display in your car as car thievery is quite common.

Note: Distances in the following instructions are given from the Pier Gates. 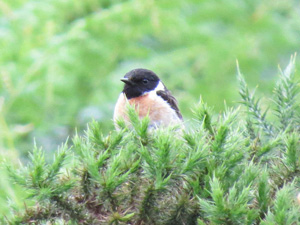 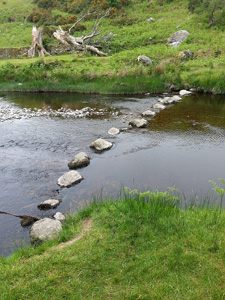 When you've finished the walk, if you are heading towards Dublin you might like to drive on from the Pier Gates to the Sally Gap, one of the most spectacular drives in County Wicklow. As you go, you'll get spectacular views on the left down to Lough Tay which is surrounded on three sides by cliffs. At the far end of the lake is Luggala Lodge, an 18th Century mansion. Famous visitors to this house include artists Lucian Freud and Louis le Brocquy, musician Seán Ó Riada, poet Seamus Heaney and singers Mick Jagger, Van Morrison, Bob Geldof, Bono and Michael Jackson. The grounds around the house have also been used as a filming location in such films as Zardoz and the TV series Vikings. You can rent the house for a mere €20,000 a week, but that does include a chef and a chauffeur-driven Rolls-Royce.

When you reach the crossroads at the Sally Gap, turn right towards Dublin. The road crosses the Feather Bed, a wild, boggy heath, before descending into the suburbs of Rathfarnham.