The Aelric Books of Richard Blake Content from the guide to life, the universe and everything 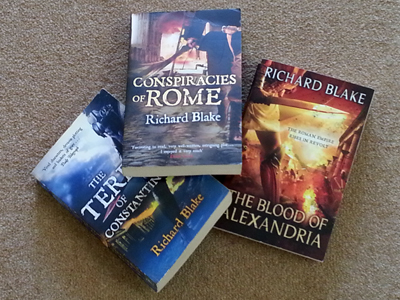 Richard Blake's 'Aelric' books are a series of adventures novels set in 7th-Century Europe. There are many books written about Ancient Greece and Ancient Rome. The Aelric books are set later, at a time rarely written about. Rome has fallen to the barbarian invaders, but has remarkably survived as a city - it is now almost completely ruled by the Christian Church. The capital of the Empire is now Constantinople and the Empire is under pressure from the Persians in the East. The Slavs are invading Greece and there are various other bands of barbarians such as the Avars about, looking for any opportunity to move in and take booty.

The Church based in Rome is still on speaking terms with the Christians of the East based in Constantinople, but there are differences in their approaches to religion which will obviously cause friction later on. And there are also rumours of a new religion spreading out of Arabia. So it is a time of great change in the Empire.

Into all of this, add a young Englishman, Aelric. He's tall, blond, good-looking, intelligent and not too bad with a sword either. Aelric is English rather than British - that is, he is a member of the Germanic races that a few hundred years earlier took England from the Celtic Britons. Getting into a spot of bother with one of the local chieftains over the matter of the chief's daughter, he flees to the Continent and travels to Rome. The Romans can make nothing of his Anglo-Saxon name, so they call him 'Alaric' and he is almost always known by this name. We will use this name for him from this point onward in this Entry. He rapidly gets involved in a series of plots involving murder, treason and the future of the Empire.

The books are full of historical facts and give a very good impression of what it would have been like to live at that time. They are also full of sex and violence, which is probably equally historically accurate, but the sheer amount of it may be off-putting to some. Alaric loves sex and doesn't care who he does it with, male or female, slave or citizen. And the violent scenes can be extremely graphic - there are torture scenes, public impalements and wholesale slaughter. While Alaric himself has a keen sense of justice and tries to treat people fairly, those he deals with are not so high-principled and many people die along the way.

The books are interesting, exciting and funny if you can stomach the violence in them.

The first book was published in 2008 and there have been a steady stream of them at a rate of one per year since then. So far there have been six books. Alaric lives to a grand old age and eventually as an old man starts to tell the story of his life, so the story can tend to jump around a bit - he doesn't always tell events in exactly the order they happened, which can lead to some tense excitement.

To give a flavour for the style of the books, here are some quotations:

'We haven't been in Rome two days,' Maximin shouted, 'and already you're out all night - drinking, whoring and gambling, I've no doubt.'
- Conspiracies of Rome

But it was now that I conceived my true mission in life. This has not been wealth and sex and pleasure of the bestial kind - though I'll not deny I've managed more than the common share of all these. It is something of which Epicurus himself would have approved. My mission has been to save all that I could of the ancient learning.
- Conspiracies of Rome

And the Circus crowd in Constantinople does enjoy a good public execution. For all his other derelictions, Phocas certainly knew how to jolly the Circus along in that respect. A few years earlier, he'd had one of his best generals burned to death in the Circus. That hadn't gone down well with the armies of the East, which had downed weapons in protest, but it had delighted the crowd.
- The Terror of Constantinople

By treating these events as related, was I confusing two separate chains of causation? Possibly, but hardly likely. That would require two separate killers, both deciding to act on the same night, and both gaining access to a normally secure Legation.
- The Terror of Constantinople

... I knew well enough that the waters would eventually recede, leaving behind them a thick layer of mud. This would be the virgin soil in which the harvest would be sown come October, and from which, come March, the fabulous wealth of Egypt would be reaped. If those who sowed and reaped it had never yet seen much of this wealth, that, I told myself, I was here to change.
- The Blood of Alexandria

Some of the more imaginative - or perverted - divines have written about Hell as a series of levels, beginning with the moderately unpleasant and finishing with the indescribably awful. I suppose the long, dimly lit corridor that ran from that door under the whole length of the Prefecture would rank about halfway down the scale of horror.
- The Blood of Alexandria

It was Aramaic, and he was reading out something nonsensical from one of the more recent prophets. It was no worse than anything you hear in church every Sunday. But even if you aren't a believer, foreign religions always sound more stupid than your own.
- The Sword of Damascus

Alaric is the narrator of the stories, so he is in them throughout, and everything we see is filtered through his sceptical view of the world. Some of the people encountered are real historical figures: Phocas and Heraclius were real Byzantine Emperors, Abd al-Malik was indeed the Caliph at the time of Alaric's journey to Damascus, and the Venerable Bede even gets a mention as a young novice when Alaric is in the monastery of Jarrow. But most of the characters in the books are fictional. Some feature in a number of books, while others appear in only one.

Richard Blake is a pseudonym for Sean Gabb. Gabb is an English author, lecturer and political activist. He has a degree in History from the University of York, and a PhD in Political and Intellectual History from the University of Middlesex. He has worked as Economic and Political Adviser to the Prime Minister of Slovakia, as Director of the Sudan Foundation, and since 2006 as the Director of the Libertarian Alliance. He has published a number of books under his own name including two novels, The Churchill Memorandum and The Break.

The Aelric books are published under the pseudonym Richard Blake, and very little biographical detail is provided by the publishers. This is probably to distance the books from Gabb's often controversial views on many topics. The distinction between socialist, conservative and libertarian are minor ones compared with the difference between Alaric's basically 21st-Century view of the world and the 7th-Century opinions of the people around him. It also somewhat protects Gabb from being ridiculed for writing books packed with sex and violence.

The aged Alaric telling his life history is in his nineties, while the last book ends when he is only in his early twenties, so there is still about 70 years of history to fill in. We can look forward to many more books about Alaric in the near future.