Guitar Hero - the Console Games Content from the guide to life, the universe and everything 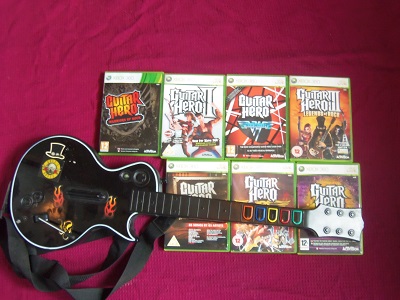 For those about to rock, we salute you!

Guitar Hero games are music-based video games published by RedOctane and Activision. The series is notable for its use of a guitar-shaped controller to simulate the playing of music on an actual instrument. Music is represented by coloured blobs that correspond to buttons on the controller - the blobs move across the screen in time with the song. The games can be played by one player as well as in cooperative and competitive modes for more players. The series has used a range of rock music tracks from the 1960s to the present. Guitar Hero games have been released for video game consoles plus versions for mobile phones and the Nintendo DS handheld gaming system.

The Guitar Hero franchise became a phenomenon, making many appearances in popular culture, as the games were extremely popular party games and hobbies. It is not to be confused with the many similar games on the market, notably Rock Band, that have similar gameplay but don't require the separate controllers. No new games in the series (which branched out into Band Hero and DJ Hero in 2009) have been produced since 2010 and the downloadable content (DLC) service was discontinued in 2014.

The original Guitar Hero was released on the PlayStation 2 in November 2005 and was developed by Harmonix. The game was sold with a controller that looked like a Gibson SG guitar. The controller had five coloured 'fret buttons' and a 'strum bar' instead of the frets and strings found on a real guitar. Guitar Hero was inspired by Konami's GuitarFreaks arcade game; RedOctane, already selling guitar-shaped controllers for imported copies of GuitarFreaks, approached Harmonix about creating a new game to be used with an improved controller design. The game was successful with critics and players alike, and received awards for its innovative controller and its impressive soundtrack of rock songs. Most of the songs were cover versions of well known tracks. The popularity of the series meant that bands would soon be happy for their own recordings to be used in future games. Around 1.5 million copies of Guitar Hero were sold.

Guitar Hero II was even more popular. Released for the PlayStation 2 in 2006, and for the Xbox 360 in 2007, about three million copies sold. New controllers created were based on a cherry red Gibson SG guitar and a Gibson X-Plorer guitar.

The final game in the Guitar Hero series to be developed by Harmonix was Guitar Hero Encore: Rocks the 80s for the PlayStation 2, which was released in July 2007. The game reused the visuals from Guitar Hero II, but featured a shorter track list with no bonus songs. Hence it was not as well received as the previous two games.

RedOctane was bought by Activision in 2006 and Harmonix was purchased by MTV Networks. As a result, Neversoft, a subsidiary of Activision known for the Tony Hawk skateboarding games replaced Harmonix as the Guitar Hero developer. The Neversoft founder, Joel Jewett, was keen to be involved, as his team all enjoyed playing Guitar Hero together in the office at weekends.

Guitar Hero III: Legends of Rock was released in late 2007 for the PlayStation 2, PlayStation 3, Xbox 360, Wii, PC, and Mac platforms. It was the first game in the series to be played with wireless guitars and also the first to be sold in a package with two guitars.

In 2008, the first of three band-specific games was released. Based on the real life career of Aerosmith, it used venues that the band had played in, plus versions of songs they had covered. Guitar Hero: Aerosmith was the only game to use five band members rather than the four standard ones. As well as the usual characters it was also possible to unlock Aerosmith's Joe Perry, Tom Hamilton and Brad Whitford. Along with the career-spanning Aerosmith songs there are 11 other songs featured, by The Cult, Joan Jett, Lenny Kravitz and Run DMC amongst others.

Guitar Hero: World Tour was the fourth new development in the series. Whereas in the previous titles players could only play guitar or bass, World Tour added drums and vocals. A drumkit controller was made available upon release. Also, unlike the previous games, all the songs featured were originals and not cover versions. Once again, there were a variety of unlockable real rock stars, including Ozzy Osbourne, Zakk Wylde and Billy Corgan.

2009 saw the release of the final two band-specific games, starting with Metallica. As with Guitar Heroes: Aerosmith, the game follows the career path of Metallica. It also includes the opening band named 'Tallica Jr.' and gameplay alternates between the two. 28 songs are by Metallica and the band chose the other 21 which included songs by System of a Down, Kyuss, Foo Fighters and Thin Lizzy. Players could create their own band member, and it was also possible to unlock Motorhead's Lemmy Kilmister and Mercyful Fate's King Diamond. Guitar Hero: Metallica is also noteworthy because the band wore motion-capture suits and performed some their 'signature moves' for inclusion in the game.

Guitar Hero: Smash Hits came next, and was a compilation of the best songs from Guitar Hero 1, 2, 3 and Rocks the '80s.

Guitar Hero 5 followed the same format as the previous titles and also included guitar, drums and vocals. The additions to this game were 'band moments', when bonuses were available if no band member missed a note during particular segments of a song, and any combination of instruments could be played, including two drum kits. There was also a new party mode enabling a whole set of songs to be played, with players being able to drop in or out at any point and the difficulty could be changed whenever you wished without having to restart the song.

The final band-specific game was Guitar Hero: Van Halen. Not as popular as the previous two, it was originally to be released before Guitar Hero 5 but was delayed. It was notable for only featuring songs sung by David Lee Roth and ignoring Sammy Hagar's Van Halen career altogether. As with the previous band-specific games the majority of the songs were by Van Halen, but 19 other bands also featured including Tenacious D, Alter Bridge and Queen.

The final instalment of the series was Guitar Hero: Warriors of Rock. Narrated by Gene Simmons from Kiss, each character plays a number of songs in a specific rock sub genre in order to transform themselves into a Warrior. Once all eight characters have achieved this end they can split into two bands and take on 'The Beast' in order to free the 'Demigod of Rock'. Once 'The Beast' has been defeated there is a final level with, arguably, some of the hardest songs in the games' history1.

Additional downloadable content (DLC) was available for the games until 31 March, 2014, when new content stopped being produced. DLC that was purchased in the past is still playable, though.

The gameplay for all games in the series is similar - players pick an avatar and start their music career in a venue that may be either fictitious or a representation of a real place. Success at a small venue leads to opportunities to play bigger and bigger gigs and earn virtual money so that the avatar can buy new outfits.

Using the controller, the player selects the fret buttons and strums along with a song. Sequences of correct notes increase the score, but if too many notes are missed or played wrongly, the player is booed off the on-screen stage and the song ends. Playing particular sequences of notes correctly fills the 'Star Power Meter' - activating 'Star Power' makes the audience clap along, so they don't notice missed notes as much, and the score increases even more.

There are usually four difficulty levels. Easy requires only three fret buttons, and notes appear at a steady pace. Medium uses four buttons and notes appear more quickly, Hard uses all five buttons, and Expert introduces more notes, so that the gameplay is most similar to the actual guitar playing in the original song.

Real guitar-playing techniques are replicated in the game - single notes may be played, or chords, and there is a 'whammy bar' on most guitar controllers allowing the pitch of sustained notes to be varied. 'Hammer ons' and 'pull offs' also feature in the games, where notes are played by just changing the fret fingering rather than strumming each note. For Guitar Hero: World Tour, the controller had a slider, allowing for faster playing of notes. A button was also added that could either be used to activate 'Star Power' or be used in freestyle play mode to mute the sound, to create a similar effect to actual guitarists using their hands to stop the strings' vibration after a strum. 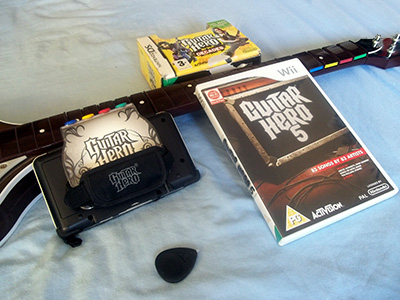 Guitar Hero: On Tour was released on the Nintendo DS console in 2008. Instead of a guitar-shaped controller, the game included a 'Guitar Grip' device and a plectrum-shaped stylus - the Guitar Grip has just four fret buttons and the stylus is used to strum the guitar strings on the touchscreen. Guitar Hero: On Tour Decades was released later in 2008 and allowed players to share songs via the DS's wifi function. As the name suggests, songs were grouped into decades - players started with songs from 2007 and then moved back in time as they progressed, finishing with songs from the 1970s including Queen's 'We are the Champions'.

Guitar Hero: On Tour Modern Hits followed in 2009 and focused on songs from the previous five years. No further games were produced, however, as the Guitar Grip utilised the GameBoy Advance compatibility slot in the Nintendo DS and DS Lite, and there was no such slot in the new console, Nintendo DSi, that was released in 2009.

Guitar Hero III Mobile was released for mobile phones and Blackberrys in 2007 and 2008 respectively and included 15 songs from both Guitar Hero II and Guitar Hero III. Only three fret buttons were needed to play the songs, corresponding to numbers on the phone keypads. Monthly add-on packs, with three extra songs in each one, were released every month during 2008. Guitar Hero III: Backstage Pass was released in July 2008 and required players to manage the band as well as play the gigs. Guitar Hero World Tour on mobile again included download packs from its release in December 2008 and featured a drum mode.

Guitar Hero 5 was also released in a mobile version, but the mobile games were discontinued on 31 March, 2014, so they can no longer be downloaded.

The games have attracted legal action. For example, Courtney Love threatened to sue over the use of Kurt Cobain's image in Guitar Hero 5 even though Activision claimed to have been expressly given permission by her and the Cobain estate. Apparently it was a 70-post Twitter tirade by Love that prompted that action. It is not known what happened afterwards, but the fact that Kurt Cobain still features in the games suggests it never went further than Courtney getting her knickers in a twist.

Guitar Hero's influence extends beyond the gaming sphere. It potentially encouraged people to take up playing a real guitar, helped disabled people to improve their physical dexterity, and introduced people to a wider variety of music than they may not otherwise have encountered.

The highest score achieved in the game has been entered into the Guinness Book of Records. The game has also appeared on television, in an episode of South Park and on Ellen DeGeneres' eponymous chat show.

1Guitar Hero III contains what is widely regarded as the hardest song in any of the games - 'Through the Fire and the Flames' by Dragonforce.