Fashion Violence: The Straw Hat Riot of 1922 Content from the guide to life, the universe and everything 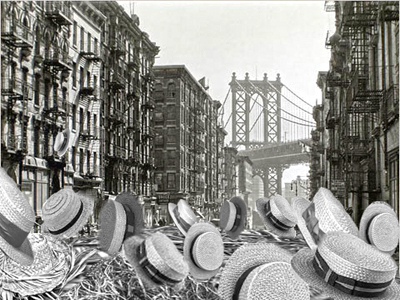 In the almost 400 years of New York City's history, many turbulent events have taken place. Rioting has not been unknown. In the 19th Century alone, there were the Anti-Abolitionist Riot of 1834, the Flour Riots of 1837, the Astor Place Riots of 18491, the Police Riot of 18572, and the New York City Draft Riot of 1863, to mention a few. These events caused uproar, property damage, injury and loss of life. They might have made some people question how safe it was to live in the city that never sleeps. None, however, was quite as bizarre as a 20th-Century event set off by fashion outrage. We refer, of course, to the great Straw Hat Riot of 1922.

As riots go, the straw hat affair was small potatoes in terms of mayhem. There were some broken heads, but no one was killed. Miscreants were fined or briefly jailed. But the event is not without interest to the social historian. Just why would anybody riot over a straw hat?

The Boater and its Season in the Sun

In the late 19th and early 20th centuries, there were hats. People wore them whenever they went outside. Hats were almost required. In fact, the absence of headgear would be noticed, as in 'he was so excited, he ran out hatless into the street'.

Hats indicated social status. A banker might wear a dignified homburg, a politician a top hat to a state occasion. Those without hats wore cloth caps, which they tipped to the gentry. Ladies vied with one another to wear attention-getting creations of startling strangeness, adorned with ribbons, fruits and birds3.

New York City's millions included those who could not afford expensive hats. Woolworth's would sell a straw boater for ten cents. Ladies could decorate theirs with artificial flowers or fruit at a nickel (five cents) a geegaw, while men could add a jaunty ribbon for the same price. Straw was an inexpensive summer alternative to the pricey hat: cool, respectable, and low-maintenance. Unlike the felt article, it did not require, nor would it sustain, reblocking. But it was also fragile: if it fell to the ground, a careless footstep would end its career.

Early-20th-Century people had etiquettes4. There was a right way and a wrong way to call on your neighbour. If you were of a certain social class, there was a right way to leave a calling card – which corner you turned up held a message. There was an etiquette for spitting  – when, where, how – and one for tipping hats to strangers and ladies.

There was a season for everything, too, including straw hat-wearing. Men who wore straw hats after 15 September risked social opprobrium. Why 15 September? No one knew. But it was Not Done.

By 1910, it had become a habit of playful young men to snatch their friends' belated straw boaters from their heads and destroy them. At the New York Stock Exchange, brokers, all aged over 20, tore the offending objects from their colleagues' heads, and stamped them into trash. The crunching straw made a pleasant sound, and indicated the passing of the seasons. All jolly fun – until a stranger did it. Then it was a cause for outrage.

On 13 September, 1922, a group of 'youths' – read, a street gang – decided to get a jump on the fall season's hat-smashing merriment. They started out on the Lower East Side of Manhattan, a low-rent district with a bad reputation. The street youths grabbed factory workers' straw hats as they passed on their way home, throwing them to the ground and stamping on them. At first, the workers took the assault in their stride. But when the hat attackers turned their attention to some dock workers, they struck back. A brawl ensued.

The hat-engendered donnybrook spread, until it tied up traffic on the Manhattan Bridge. That's when the police were called in. Several arrests were made, and the fight was broken up. But it all started up again the following evening.

On 14 September, the hat riot got a lot bigger. It spilled over into the more affluent West Side. All along Amsterdam Avenue, teenage boys prowled, wielding sticks with nails embedded in the end: straw boaters, for the snatching of. Hats were seized, men resisted, fights broke out. The mob swelled to 1,000. The police made a number of arrests, and some of the riot victims were hospitalised.

The newspapers were all over the story. The New York Times reported, 'Straw Hat Riots Embroil East Side'. According to their investigative journalism, a local magistrate was particularly outraged at this assault on New Yorkers' personal freedom. The magistrate, whose name was Peter A Hatting, stated that a man 'has a right to wear it [a straw hat] in a January snowstorm if he wishes.' Magistrate Hatting threatened to jail the next hat-smasher he encountered. Most of those arrested paid fines, and were let go. A few, perhaps lacking funds, spent a few days in lockup. The city went back to normal.

Fall turned into New York winter, and the Straw Hat Riot faded into memory. In 1925, the US President, one Calvin Coolidge, violated straw hat etiquette. It was remarked on in the New York Times5, but no one in Washington, DC, dared to snatch the Chief Executive's boater. He could wear it during hurricane season, if he dared. After all, he was an American.

A reflection on straw hat outrages in 1910 in the Pittsburgh Post-Gazette.

A follow-up report on the 1922 riots in the New York Times.

A 16 September, 1922, report by the Associated Press that reached national distribution.

1The Astor Place Riots were caused by an argument over a Shakespearean performance.2Yes, the police were rioting.3The birds were usually, but not always, stuffed.4Even early-20th-Century Americans had etiquettes.520 September, 1925.