Christopher Nolan - Author and Disabled Person Content from the guide to life, the universe and everything 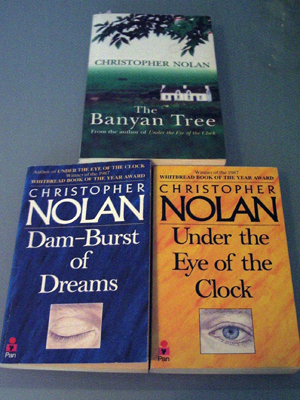 Irish poet and writer Christopher Nolan1 only published three books during his relatively short lifetime, but his distinctive writing style and the way in which he wrote his books (using a 'unicorn stick' attached to his forehead that allowed him to select letters on a typewriter) meant that his works became quite famous.

Christopher Nolan was born on 6 September, 1965, in Ireland. It was a difficult birth - his mother Bernadette eventually had to have a Caesarean section, and by the time Christopher emerged, his brain was damaged from lack of oxygen and he had cerebral palsy.

He was never able to walk or speak, but he was soon able to communicate with his mother by moving his eyes in response to her questions. Hence Bernadette noticed his intelligence - she talked to him about all kinds of subjects, his older sister Yvonne sang to him, and his father Joseph read classic fiction to him. Bernadette taught him the alphabet by writing the letters on pieces of paper and hanging them on the walls in the kitchen.

My mother is especially lovely, as it was she who encouraged me down the years.
- Christopher Nolan, Mothers, 1977.

His first school was the special school inside the Central Remedial Clinic in Dublin. He had to do physiotherapy as well as his lessons, but he got on well with his therapists. At the age of 11, he was prescribed a new drug, Lioresal. It relaxed the muscles that cerebral palsy had caused to spasm out of his control, and so he was able to move his head. With a unicorn stick on his forehead, and some support from his mother for his head, he was able to press the keys on a typewriter and compose a thank you letter.

At first, there was some doubt about whether Christopher was writing himself, as Bernadette appeared to have control of his head, but when the boy selected words he had learned through reading books and listening to the radio that Bernadette didn't even know and had to search for in the dictionary, most of his critics were convinced that he was in control of the words that the typewriter produced2.

His typing was thus firm evidence of his intelligence, and although many secondary schools rejected him because of his physical disability, he was accepted into Mount Temple Comprehensive School. He voraciously devoured and filed away all the knowledge he learned there.

Once Bernadette and Christopher had worked out their system for enabling him to type, he was able to write out the poetry and short stories that he had composed in his mind over many years. Some of the stories and poems were published in magazines, including the Spastics Society3 magazine after he won its writing competition, and also the Sunday Times Magazine. Most of his writing was collected together for publication in Christopher's first book, Dam-Burst of Dreams, published in 1981.

The book demonstrated Christopher's unique style of choosing words to make the maximum impact in a short phrase, and his particular liking for alliteration and onomatopoeia. The poems and writings covered a variety of topics, including letters to relatives, and a play, but perhaps the most well known is the short story 'Mammy Encomium' written in 1978-9 in praise of his mother. He used pseudonyms for his parents and himself, but the story itself was autobiographical, detailing his early life and schooldays. The story finished at the point where he had won the Spastics Society competition and travelled to London for the prizegiving, meeting Edna Healey, the wife of the Chancellor of the Exchequer, and enjoying a tour of Downing Street.

Dalliently, joyfully, Joseph longed to be able to say that he only knew that as he typed thoughts, brilliant, bright, boiling words poured into his mind.

After the article in the Sunday Times Magazine about him and his writing, an appeal was launched to buy Christopher a computer. Thousands of pounds poured in, so he was able to obtain the machine that allowed him to type by himself as well as control the TV and radio and play computer games. The computer cost £2,200, and the remaining money that had been donated was put into a trust so that other disabled people could be provided with communication aids too.

Under the Eye of the Clock

Christopher's second book, Under the Eye of the Clock, was an extension of the 'Mammy Encomium', and told the story of disabled boy Joseph Meehan at home, in school and at university. It also included mention of Joseph writing stories for competitions, publishing his first book and facing the publicity (positive and negative) that resulted. The work was again autobiographical and gave readers an insight into Christopher's experience of life and his innermost thoughts.

Thursday morning saw Dam-Burst of Dreams and its author off to school together. The book sat in along beside him in his chair. Fashioning himself as normal had been his schoolboy's goal and now here beside him he had his foolproof account of his desperate disabled life.

The story began with his return to Ireland - 'a welcome to a man in boy's garb' - after the trip to London that concluded the 'Mammy Encomium'. Through reminiscences of his early years, when at the age of three he realised he was different from other children, and everyday anecdotes of Irish life with his family and friends at school, it concluded with him being accepted into Trinity College Dublin to read English. The book won the Whitbread Book of the Year Award in 1987.

Christopher's writing was compared to that of James Joyce by reviewers. Comparisons were also made between him and Christy Brown, the author of My Left Foot, which was published in 1954. Christy Brown was also born in Ireland, had cerebral palsy, was a poet as well as a novelist, and his first book was an autobiographical account of his early life and the liberation experienced when he found a way to communicate (in his case, by writing with a chalk held by his left foot).

A full length novel, The Banyan Tree took Christopher more than ten years to type - he left Trinity College to focus more on writing it at his own (and his muscles') pace rather than having to compete with deadlines to compose essays for his degree4. The book tells the story of a woman and her family through reminiscences of the past. It is much more adult than his previous books, and definitely not as autobiographical, being written from a female perspective and describing the woman's marriage and pregnancies, then her later years when her children had flown the nest. It is still grounded in Christopher's experience, though, including descriptions of Dublin and the countryside of Ireland as well as details of family life that he would have identified with. Less condensed than his previous novel, as he worked many hours on the book to create more flowing prose, the language still contains the lyrical word choice, portmanteaus and malapropisms that he had become known for.

Minnie sang quietly as her feet strangulated the stairs. Ten times did she climb up and back, checking on things prior to Maggie Dempsey's arrival. She had the fire blazing in the grate, the cradle ready, its satin lining aired.

After completing The Banyan Tree, Christopher started work on his next novel. Sadly, he died before it could be finished - on 20 February, 2009, he choked on some food. He was rushed to hospital, but could not be saved - he was just 43 years old.

His name lives on, especially in Ireland. Mount Temple Comprehensive School holds annual 'Eye of the Clock' awards ceremony in his honour to reward pupils for their effort. The band REM wrote a song 'The Wrong Child' in 1988 that had been inspired by Under the Eye of the Clock and Mount Temple's alumni U2 wrote the 2004 song 'Miracle Drug' about Christopher and the medication that allowed him to communicate the stories that had previously been trapped in his head.

1Sometimes known as Christy Nolan.2Christopher described in his book Under the Eye of the Clock the visits of the many journalists who came to see him communicate, including one who wrote an article claiming Christopher's work was ghost written.3Now known as Scope.4In Mount Temple Comprehensive, he had been excused from school homework so that he could concentrate on communicating everything that he had stored in his mind before he had the ability to type.