Brian Johnston's Corpse Content from the guide to life, the universe and everything 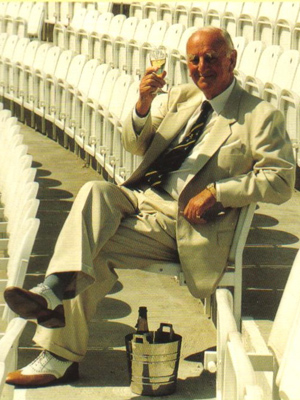 We should first make it clear that this is not a morbid entry. In fact it's one of great merriment. Although Brian Johnston indeed became a corpse – he died in 1994 – the corpse we shall describe is a term used on the stage. When an actor 'corpses', they forget their lines and remain there in a state of incongruous and undoubtedly embarrassed silence until they either think of something to say, or others help them out. The term is also used transitively: an actor can, as a practical joke, 'corpse' another cast member by doing something to put them off or make them laugh.

Yet Brian Johnston was no actor. He was a British radio broadcaster. From the end of the Second World War, his distinctive upper-class tones were to be heard on all manner of shows. From 1948 he provided a live spot performing stunts on the long running chat show In Town Tonight. In Down Your Way he travelled the length and breadth of the country visiting small communities to interview the local characters. At the other end of the scale, he covered state occasions, including royal weddings. He was also a regular on panel games. Yet, the thing he will be best known for is sports commentary, in particular cricket.

Although he had never played the game professionally, Johnston became the BBC's inaugural cricket correspondent in 1963. He initially covered televised matches, but soon became a regular fixture in the radio commentary box. His natural, unaffected style helped Test Match Special (TMS) become one of the BBC's most popular productions. Not only do the commentary team chat all day about events happening on the field, but they also have to cover the long periods when rain stops play. The good-natured banter even attracts listeners who have no particular interest in the game.

Eton and Oxford educated, Johnston never lost his schoolboy humour and charm. The TMS studio became a social club presided over by Johnston as well as others such as Henry Blofeld and Jonathan Agnew. Listeners send mountains of letters; many even bake cakes for the commentary team to enjoy during the intervals – every one gets a mention.

Yet, behind the relaxed and genial persona, Johnston had another trait – that of a practical joker. He never missed the opportunity to wind up his fellow commentators on air. He would direct questions at others as soon as they had taken a mouthful of cake. Close-of-play summarisers would suddenly find themselves presented with a nude glamour photo while they were halfway through reading the scorecards. Henry Blofeld once found that while he was talking, Johnston had quietly led all the others out of the commentary box, leaving him a note: 'keep going until 6:30!'

It was only natural that his colleagues would reciprocate. Jonathan Agnew would regularly insert fictitious sponsors' names like 'Mr Hugh Jarce' into lists that Johnston would read out at trophy presentations. He invariably fell for it, to listeners' amusement.

And it was Agnew who sparked the incident for which Brian Johnston is best remembered. On 9 August, 1991, England were at the Oval cricket ground in London, playing the fifth and final test match of a series against the West Indies. It was the end of the second day of five. England had been bowled out earlier in the day for 419 runs, but their star player Ian Botham had been given out in unusual circumstances. West Indian fast bowler Curtley Ambrose had bowled him a bouncer – a fast, rising, head-height delivery from which he had to take evasive action. Unfortunately, Botham was knocked off balance, and as he reeled towards the stumps, he tried to step over them, but dislodged one of the bails with his thigh. The scorecard recorded it as:

IT Botham hit wicket b Ambrose 31

It was close of play at 6:30, and Brian Johnston was summarising the day's cricket and reading out the scorecard. He prompted his colleague Agnew for a comment on Botham's dismissal. Agnew responded that Botham 'couldn't quite get his leg over', fully knowing what seed he had just planted.

Johnston paused momentarily in response, then doggedly tried to read out the rest of the scorecard as he was consumed by what can only be described as a tsunami of giggles. It didn't help him to see that both Agnew and scorer Bill Frindall were similarly helpless.

The result was a piece of radio gold, as Johnston gamely fights to keep control but loses spectacularly, alternating between silence, wheezing, and speaking very slowly in a high pitched voice. To describe it in words fails to do it justice, but fortunately the BBC hosts a small shrine to the event on their website.

It is not known whether it caused accidents, however many listening motorists reported having to pull over to the side of the road as they were caught up in Johnston's infectious corpsing. In 2005 British radio listeners voted it the greatest sporting commentary of all time.

Johnston was somewhat embarrassed by his loss of control and refused to share the box with Agnew for almost a year afterwards, for fear that eye contact would cause him to do it again. And indeed he did. Together again in 1993, Agnew passed him a letter to read out, one written by the (authentic) Mr William H Titt. Once again the duo dissolved helplessly, just at the time the teams were coming out onto the field, but this time they were rescued by colleague Trevor Bailey. According to Agnew, Johnston 'had to be led away, squeaking and wheezing pathetically'.

Brian Johnston died early the following year at the age of 81 – a fine innings from one of life's great broadcasters, jokers and cake appreciators. Tributes came from far and wide on that day, perhaps the most moving being from the British Prime Minister, John Major:

Summers will never be the same.

Image by kind courtesy of Johnners.com