The Zoar Home: How to Make a Social Difference Content from the guide to life, the universe and everything 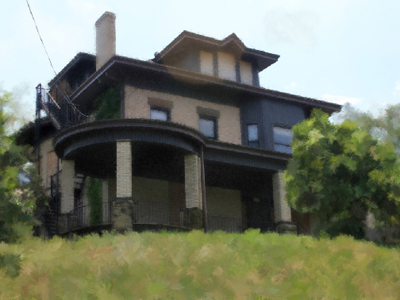 History books are full of world-changing events and the lives of the rich and famous. Readers of these books are sometimes overwhelmed by the futility of it all. They wonder if the lives of the not-so-rich and completely-unknown really matter. Is it all about success, profit, and the bottom line? More importantly, can an individual make a difference in the scheme of things?

The quiet community of Allison Park, Pennsylvania, is nestled in the North Hills near Pittsburgh. For most of the 20th Century, a driver on Mt Royal Boulevard could see a curious sign, discreetly located in the bend of an S-curve in the old road1. The sign read: 'Zoar Home for Mothers and Babies'. The driver would be intrigued: who lived in this 'home'? And why was it necessary?

And thereby hangs a tale.

The superintendent of the Home said there are six babies there for adoption. Any reputable person desiring to adopt any one of these babies can obtain all information necessary by calling Franklin 2395.
– The Pittsburgh Press, 19 February, 1922.

Back in the early 20th Century, life was hard for 'unwed mothers' – young women, usually teenage girls, who found themselves pregnant, but without husbands. The financial need was acute, and social stigma was a real problem. Often, the girls' parents were at their wits' end. How could they provide for the mother and child-to-be? How would the neighbours react?

The safest plan, of course, was to send the girl away. She could give birth in another location, and return with a story about visiting sick relatives. The baby could be adopted out. Potentially, this was a win/win/win situation: the teenager got a second chance at life, the baby got a good home, and a childless couple earned a blessing. But these things usually cost money.

That's where Ernst and Clara Schmitz came in. These German immigrants initially opened their home in Swissvale, Pennsylvania, to girls in need of maternity care. Mrs Schmitz was a good organiser, her husband was a lay minister, and back in 1912, that's about all it took. The service proved popular – it was sorely needed – and soon, the Schmitz house wasn't big enough. In 1917, they opened the Zoar Home on Mt Royal Boulevard. There's no information on why they chose the name 'Zoar' – but, in the Bible, Zoar was a place of refuge2, and this out-of-the-way place certainly provided a refuge for many a troubled young woman.

To help pay for their services, the Schmitzes signed up their charity with the Community Fund of Pittsburgh. Fundraisers, such as rummage sales, also helped raise money. The Home's founding was timely: in 1918, Pittsburgh was ravaged by the influenza epidemic. The Schmitzes were soon busy caring for widows and orphans.

Institutions like the Zoar Home were unusual in their day. They provided care, discretion, and impartiality. The Home took in all comers, regardless of race, creed, or other affiliation. Pretty soon, they had their hands full. The Home served at least a hundred expectant mothers a year. They needed more help.

Enter their daughter Annie. She had been left behind with relatives when her parents moved to the US. As a teenager, she was stuck in Germany – World War I and German visas were not compatible. After the war, Annie moved to the US, changed her name to the less-objectionable 'Smith', and attended nursing school in Cincinnati. Then, she went to work at the Zoar Home. Annie Smith took over the running of the Home in 1937.

Under Annie's leadership, the Zoar Home for Mothers and Babies continued to care for single mothers. Zoar provided prenatal care, meals, delivery and a three-day hospital stay in nearby West Penn Hospital. It also offered shelter for babies taken in by the Child Welfare authorities.

As time went on, the services became more sophisticated. Back in 1922, Annie's mother was advertising for 'reputable' families to take in babies. Although the Zoar Home was not an adoption service, it did provide links to adoption agencies. Initially, the Home kept the babies, sometimes as long as 18 months. By the 1960s, agencies were advising that adoptions take place as soon after birth as possible.

'I miss them,' Annie said then. 'Especially at Christmas. It was like one big, happy family.' But Annie agreed that the children were better off this way. So were the mothers: the Zoar Home offered girls counselling and a chance to finish their high school courses.

When Annie retired in 1966, another director took over, and then another. By the 1990s, the Zoar Home was in financial trouble. According to an open letter of 1991:

In recent years, clients have been more likely to come to us from dysfunctional families, severely victimized and unprepared to care for themselves or their children. This has been a deeply rewarding program.
However, to provide residential care for mother and child, plus counselling and schooling, has become prohibitively costly at a time when support falls far below what is required. Also, local public policy has called for other approaches to meeting the residential needs we have sought to fulfil. For these reasons, we have made the difficult decision to discontinue this program.

For a few years more, the Zoar Home continued to offer daycare for needy families, and help for expectant mothers with substance-abuse issues. In 1998, the year before Annie Smith died, the Home was put on the market for sale.

There's good news on that front, though: the property was bought by the Hearth, which stands for Homelessness Ends with Advocacy, Resources, Training and Housing. This agency is raising over a million dollars to build housing and provide training and social programmes for homeless women and their children.

According to their literature, Hearth has an amazing success rate. In their previous programme at another location, they served almost 200 women and 360 children. Of the women enrolled:

Did They Make a Difference?

What difference did it make, after all?

A 1960 resident of the Zoar Home wrote later, '...the big thing is that there are people there who care.' This young woman had twins. She decided to keep her babies, so the Zoar Home took care of them until she found a job.

Ernst and Clara Schmitz might have been proud. They would probably have been pleased to see the online photos of the renovations, and to read Hearth's success stories. To answer the question – can an individual make a difference? – they might have said, 'Ja. But it takes dedication and hard work.'

History books are full of world-changing events and the lives of the rich and famous. They may not remember names like Clara Schmitz and Annie Smith. But these people may have made the biggest difference of all.

1Mt Royal Boulevard dates from the 18th Century.2See Genesis 19:22, where Lot flees there from the destruction of Sodom.