Gheluvelt Park, Worcester Content from the guide to life, the universe and everything 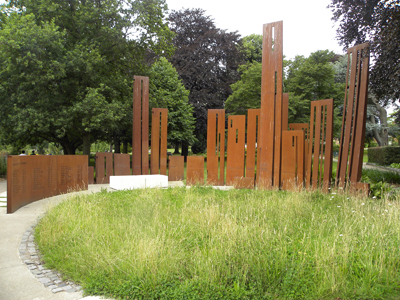 There is, it must be said, not a great deal of variation in local war memorials. They tend to be large stone obelisks bearing the names of people from the immediate area who gave their lives in service of their country, principally in either the First or Second World Wars. The war memorial in Gheluvelt Park, on the other hand, is made mostly of metal, is quite educational, and, when you consider the implications, really rather sobering.

The Piece of Land Subsequently Known as...

Historically the park land has had a number of owners, though the details are somewhat patchy. Prior to the 18th Century it is not known who owned the land, but it is thought to have been used for iron working. Most of the land was owned by the Cookes family for much of the 18th Century, though around 1751 the land was leased to a Mr Garway, and seems to have been a fuller's yard1. Comprising of a mill and eight pools, the works were primarily used for making sailcloth. Sometime during the next four decades the lease expired, and Barbourne House was built on the northern edge of the land, with the remainder being the house's gardens. It is known that the Reverend Thomas Cookes lived there in 1788, and he bought up several of the surrounding plots of land in next couple of decades.

It is possible that the Reverend Thomas may have overstretched himself, as the Barbourne House and gardens were sold to JP Lavender, a banker, in 1838. Lavender evidently already owned a big house on the other side of Lavender Road to Barbourne House: Lavender House. Who lived in Barborne House after the sale isn't clear, although it could have been bought for Lavender's daughter Mary and her husband John Mathew Gutch. John died in 1861, and Mary followed in 1873. In 1881 the land was sold again, and the House turned into Barbourne College. The college lasted just short of 30 years, and the land was once again on the market in 1909. Worcester City Council initially considered purchasing the site in order to make it into a public park, but had second thoughts when World War I broke out.

The battle of Gheluvelt was one of the earlier engagements of World War I. The British Expeditionary Force had formed a line in Belgium in order to prevent the Germans from reaching the Channel ports. On 31 October, 1914, the line broke at Gheluvelt near Ypres, and the only soldiers in the area available to plug the gap were the 2nd Battalion of the Worcestershire regiment. They mounted a bayonet charge, and successfully pushed back against more than a thousand German troops. They plugged the gap, and kept the line, but suffered 34 dead with another 158 injured men.

In 1918 the park was actually purchased by the Mayor, with the intention of passing it on to the council when funds were available, and it was in this year that the area started to become known as Gheluvelt Park. A tank was donated to the city and placed in the park, though it has since been removed. Within a few years homes were built on the north border, on the site of Barbourne House, facing into the park, for retired or injured servicemen or their widows. Several of the initial occupants of the houses were injured in the battle of Gheluvelt.

When Gheluvelt Park was officially opened to the public on 17 June, 1922, it was considered that the park as a whole stands as a war memorial, particularly to the soldiers who died at Gheluvelt. A bandstand was subsequently donated to the park and placed in the centre of the ornamental pond. During the next few years tennis courts were established, a paddling pool was built, and a children's play area created.

The park was renovated in 2010 with help from the Heritage Lottery Fund. It now contains a splashpad (on the site of the old paddling pool), an upgraded children's play area (the sign at the edge of the area informs us that 'Adults are free to use this facility, as long as they are accompanied by a responsible child'), and a World War I Interpretation Feature.

The bulk of the Interpretation Feature is 28 Corten steel panels of differing heights. Each panel represents a two-month period of World War I, except for the first and last panels (August 1914 and November 1918 respectively). The panels are arranged in groups of six, making each group one year. The height of each panel is dictated by the number of British and Commonwealth casualties, with each centimetre representing 500 dead, wounded, missing or imprisoned. There are several panels that tower over you, and therefore give you some impression of the scale of losses in the Great War, particularly the second panel of 1918, which is almost six metres, and the fourth panel of 1916, covering the worst period of the Somme.

Several long gaps are cut into the panels, representing major battles of the war to end all wars, the length of the gaps indicating the duration of each battle. The name given to each battle is etched into the steel and the base of the panel, in line with each relevant gap.

A further long curved panel is made up of several pieces of Corten steel engraved with the names of the fallen. Here the use of Corten steel caused an issue for the Friends of Gheluvelt Park. When exposed to the elements, Corten steel forms a protective layer over time which looks like rust. While this means that the panels aren't at odds with the trees that surround them, it also made the names indistinct, and eventually illegible. In the summer of 2013 the lettering on the panels was painted black, ensuring that the soldiers' names would be clear for years to come.

Finally, and specifically for the battle after which the park is named, the path around the structure is bordered by a curve of granite cobbles. Black cobbles represent the 192 Worcester casualties of Gheluvelt, and the grey cobbles, the 165 who returned unharmed in body, if not mind. 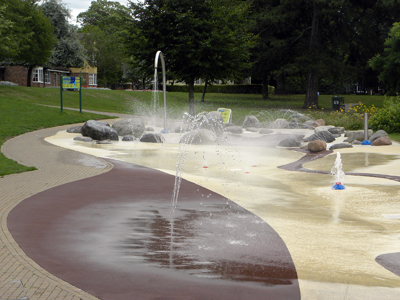 How to Find the Park

The park is located about a mile north of the centre of Worcester, between the A38 and the River Severn. The main entrance to the park is on Barbourne Road, just south of the servicemen's homes. Unfortunately, just finding it is not enough, as the park is not that big and does not have a car park of its own.

There is a free car park opposite the Pump House Environment Centre at the end of Waterworks Road, which runs along the south side of the park. Technically, this is not part of the park. Crossing the road to the Pump House will put you on a path that weaves through the grassy part of the park, leading you to the more developed section. Approaching from this direction, the Interpretation Feature is at the far end of the park.

1A 'fuller' made cloth, yarn, etc heavier and more compact during manufacture through shrinking and beating or pressing.