Confusing the Situation: Naming Conventions in the American Civil War Content from the guide to life, the universe and everything 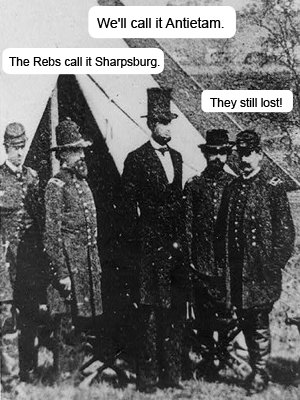 When reading about the American Civil War it is easy to be perplexed. For instance, a single battle was often given a different name by each side, and there can be confusion when you find that the 'Army of The Tennessee' is fighting against the 'Army of Tennessee.' The different names that were commonly used for many aspects of the Civil War can bewilder and confound the reader who is not fully informed on the subject.

Here is a very basic timeline of the start and end of the war;

The Blue and the Grey

During the early part of the war there were no official uniform colours and in the opening battles troops wore whatever they had. Many Confederate soldiers wore their old US army uniforms2, even though they were now on the other side. To avoid confusion the Confederates adopted a grey uniform. As the North had by now blockaded southern ports, many imported supplies became unavailable, including grey cloth and fabric dye. Most of the troops substituted 'butter-nut', a brown colour that could be easily produced from local products. The North adopted a dark blue coat, although they continued wearing the sky-blue trousers of the previous US army uniform3. Some units continued to choose their own colours including the bright red trousers worn by 'Zouave'4 troops from both New York and Louisiana

It is worth noting that cadets at the US Military Academy at West Point still wear a grey uniform and are often called 'The Long Grey Line'.

The Confederacy consisted of eleven states who had voted to secede from the United States5. They are often referred to as 'The Confederate States of America' or simply 'CSA'; also 'The South', 'Rebels' and Secessionists', which is sometimes reduced to 'secesh'. The South relied heavily on slave labour.

Most Southerners of the time would have said they were fighting for their state's right to free trade and home rule. As well as the treatment of free African Americans, it included issues such as forcing the South to trade with northern US cotton mills rather than shipping their cotton overseas to Britain, which had arisen during the 1830s. This had resulted in South Carolina's state government passing the Nullification Ordinance which declared unconstitutional, and therefore null and void, tariffs that had been introduced by the federal government to promote American manufacturing and which had largely favoured the North's commercial interests. The ordinance was repealed after six months following a reduction in the tariffs, but the seeds of unrest had been sown.

To say that the institution of slavery was not a major factor would require ignoring all the efforts to keep the number of free and slave states in the Union equal, a political compromise between the parties. Until a definitive action against the practice was proposed, it was only a potential threat.

The Union was the established government of the United States. They are often called "The North', 'Federals', 'Yankees' or 'US Troops'. The Union was fighting to keep the country intact. It was not until 1863 that the Emancipation Proclamation brought the institution of slavery to the forefront.

While the grievances of South are well documented, it's easy to wonder why the Federal Government didn't just let them leave. The northern slogan during the war was that they were fighting to 'Preserve the Union.' The country had started as a collection of colonies, none of which had the power or resources to challenge the Mother Country - Britain. By uniting their resources they had won independence. In the eighty-plus years before the conflict there had been a strong movement to give more power to the federal government, including the ratification of the US Constitution in 1788. If any state, or group of states, could simply quit the Union, the US government felt the country might well fall again under European rule.

More urgently, the occupation of federal forts and buildings by the seceding states demanded some kind of military reply.

The Organisation of the Armies

The basic fighting unit for both sides was the regiment, commanded by a colonel. At the start of the war each infantry regiment had 1,000 men6. Many of the units were state volunteer militias, and these men, who preferred electing their own officers, were reluctant to be assigned to an existing unit.

Each infantry regiment would have ten companies of 100 men, each of which was under the command of a captain. Each company was further divided into two platoons with a lieutenant in command of each. Smaller squads would be commanded by a sergeant, or even a corporal.

Other regiments, such as light artillery, heavy artillery, dragoons and cavalry, had their own methods of organisation.

Several regiments would form a brigade; In the North the brigades were usually numbered, while the South often used the commanding general's name. Brigades would be joined to form a division or a corps, and they were usually assigned a number in Roman numerals. Several divisions would make up an army.

The Union named their armies after rivers, such as the Potomac, the Tennessee and the Mississippi, while in the South they were named for the states, or part of a state, such as Northern Virginia, Tennessee or Mississippi. Now it becomes very apparent how confusion can arise.

The Naming of the Battles of the Civil War

Each side also had their own rules for naming battles. The Union usually took name of the nearest body of water, while the South used the nearest city, town, or other named feature. In a few cases both sides did actually use the same name. To this day you can generally learn which side someone favours by the names they use for the battles. For instance:

The two most prominent generals at the end of the war were the South's Robert E Lee and Ulysses S Grant from the North.

Robert E Lee was born on 19 January, 1807. He graduated second in his class at the West Point Military Academy in 1829, and his most notable pre-war enterprise was the capture of John Brown after Brown had captured the US arsenal at Harper's Ferry, Virginia. For this and other exploits he earned respect in the US army throughout his career, but as much as Lee loved his position, and the United States, when Virginia voted for secession he felt his loyalty was owed to his State. He resigned his commission in the US Army and offered his services to the Confederacy. After General Joseph Eggleston Johnston was wounded in the First Battle of Manassas Lee assumed command of the Army of Northern Virginia and remained in command of the forces protecting the capital at Richmond for the rest of the war. Lee's home at Arlington, Virginia was seized during the war as payment for back taxes, and is now the site of Arlington National Cemetery, where the sitting US president attends several ceremonies every year.

Hiram Ulysses Grant was born on 27 April, 1822. When he entered West Point Military Academy in 1839 his name was mistakenly recorded as Ulysses S Grant, a name which he adopted for the rest of his life. Grant graduated 21st of 39 cadets, and after serving in the Mexican War he became disillusioned with his country, believing that the US had an unfair advantage over the poorly-equipped Mexicans. His appointment to several posts on the west coast led him to resign his army commission in 1854. When the call for troops was issued at the commencement of the Civil War he rejoined the Federal Army and quickly rose in rank, eventually being appointed overall commander of the US forces by President Lincoln. After the war he ran for office and was elected President in 1868. There were rumours of corruption in his administration and he died almost bankrupt in 1885, just a few weeks after his autobiography was published.

After the war was over the North was faced with the task of re-establishing federal rule in the South.

Much of the southern land and southerners' properties had been destroyed by the conflict, and the Confederate money was worthless. Everyone who had supported the Confederate government was stripped of their right to vote until they could convince their conquerors that they were now faithful to the Union by signing an oath of loyalty. The state governments were also forced to ratify the 13th Amendment, outlawing slavery, before they could resume their legislative duties.

Southerners who supported the federal troops became known as 'scallywags', while Northern opportunists who travelled south to take advantage of the situation were called 'Carpetbaggers'7.

The void left by the war also produced a large population of former slaves who had been given their freedom, but nothing else, and who had known no other existence. The plantation owners could not grow their crops without them, nor could they afford to pay them a wage. The solution was sharecropping. A family was allowed to live on the plantation and farm a certain part of the land, in return for which they had to give a portion, or 'share' of their crop to the landowner. While often thought of as a way of life for former slaves, many white southerners had also lost everything in the war and were forced to work for a share of the crop. The system usually kept the workers in poverty, although a handful of people with a family background of sharecropping have gone on to fame and fortune, including actor (and unmistakable voice of Darth Vader) James Earl Jones and country singer Johnny Cash.

1Several Confederate ships were secretly built in the United Kingdom.2From previous conflicts such as the war against Mexico.3The dark blue dye was cheaper.4Zouaves were originally north African soldiers in the French army. Like the Ghurkas in the British army, they were feared and respected for their fighting ability. Their most distinguishing feature was their unusual uniform, including the bright red baggy trousers, which was copied by other fighting units hoping to instil fear in their enemy.5In order of joining the Confederacy: South Carolina, Mississippi, Florida, Alabama, Georgia, Louisiana, Texas, Virginia, Arkansas, Tennessee and North Carolina.6Towards the end of the war it was not unusual to find several with only a few hundred men left.7 They often carried their belonging in a satchel made from carpet material.