Fyvush Finkel - From Second Avenue to Rome (Wisconsin) Content from the guide to life, the universe and everything 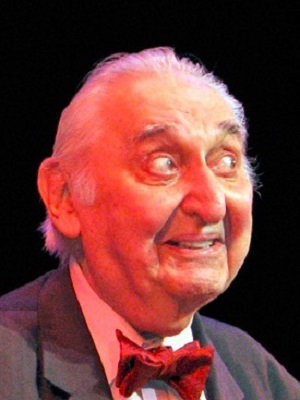 'I've known Bill Pugen for 18 years. I never liked him. When he burst into flames, part of me wanted to bring marshmallows.'

'Douglas Wambaugh appearing for the midget, Your Honor.'

'I'm very good at penile cases. My brother-in-law's a mohel. Has malpractice insurance. He's got a two-inch deductible.'

In 1992, US audiences were scratching their heads in puzzlement over David E Kelley's US television series, Picket Fences (1992-1996). The series, set in the fictional town of Rome, Wisconsin, more or less defied genre definition. Was it a crime drama with liberal policy discussions, like Law and Order? Was it an avant-garde exercise in magical realism? After all, a case of spontaneous human combustion was unlikely to pop up on L&O, and as for the time all the husbands in town found out why the new masseur was so popular with the ladies, that was not only embarrassing, but hard to classify as a viewing experience.

Most audience members who watched the series, which won 14 Emmy Awards, could agree on one thing: Douglas Wambaugh, the free-wheeling defence lawyer, was sure to get a laugh, whether he was popping off one-liners (Douglas Wambaugh for the steamroller, Your Honor!) or engaging in banter with the irascible and arbitrary judge, played by Ray Walston1. Millions of viewers asked, 'Who is this man?'

Aficionados of the Yiddish theatre knew: Douglas Wambaugh was played by the inimitable and well-loved Fyvush Finkel.

A Life in Theatre

Philip 'Fyvush' Finkel, born 1922, won an Emmy for Best Supporting Actor in Picket Fences, but his acting career began more than half a century earlier, and in a different language: Yiddish. In fact, Finkel, the son of an immigrant tailor from Warsaw, started on the stage at the tender age of 9. At that time, New York City's Lower East Side was full of Yiddish-language theatres.

When he was 15, Finkel's voice broke, and he could no longer play juvenile roles. He went to vocational school but his plan to become a furrier didn't pan out, so he moved to Pittsburgh, which also had Yiddish theatre, and studied the acting trade in earnest. He returned to New York and worked steadily.

Like Bollywood film, Yiddish theatre is fond of musical performance. If you're interested, you can watch him performing a classic song in English and Yiddish. It's called 'Ikh Bin a Boarder Bei Mayn Vayb', the saga of a divorced man who decides to continue renting his room from his ex-wife (thus keeping everyone happy).

By the 1960s, the ethnic theatres were dying out. No longer did one hear Yiddish in Pittsburgh's German 'Turner Hall', and the Thomashefskys - legendary Yiddish impresarios - were long gone, though their grandson, Michael Tilson Thomas, was now a famous orchestral conductor. Vaudeville was also dead, alas. Finkel branched out to what was called 'legitimate theatre', and in 1964 he became part of the original cast of the Broadway musical Fiddler on the Roof.

Fiddler on the Roof is based on the short stories of Sholom Aleichem, who described residents in the shtetl of Anatevka - in particular, Tevye the Milkman, who had quite a few daughters to marry off. Finkel started out as Mordcha, the innkeeper. In the 1981 revival, he played Lazar Wolf, the butcher - a larger part. Finally, Finkel played Tevye himself in a national touring company version.

After appearing in the first run of Fiddler, Finkel played Mr Mushnick in Little Shop of Horrors. He won an Obie (Off-Broadway) Award for his performance in a revival of the Yiddish play Café Crown for the New York Shakespeare Festival.

Finkel succeeded as a stage actor in English, just as he had in his other native language, Yiddish. He stayed off the TV screen, however, until the 1970s.

From Stage to Screen

Finkel had been in a movie in 1950. It was called Monticello, Here We Come, it was in Yiddish, and it had subtitles. Not much fame there, but in 1977 more people saw him playing small parts in Kojak.

1986 was Finkel's big year in film and on television: he had a part in Woody Allen's Brighton Beach Memoirs2, he was in a television adaptation of Saul Bellow's Seize the Day (opposite Robin Williams), and in a detective comedy called Off Beat.

When television producer David E Kelley saw Finkel playing a lawyer in Sidney Lumet's Q & A in 1990, he invited him to play Douglas Wambaugh, the legal menace of Rome, Wisconsin. When he accepted his Emmy Award, Finkel stated that he had waited 51 years for this moment.

Fyvush Finkel continued to appear on television in the 1990s and 2000s, including the role of a teacher in Kelley's Boston Public, a series about a school. He branched out again, lending his distinctive, gravelly voice to animated films such as The Brave Little Toaster Goes to Mars. He has also returned to the stage with a show called Fyvush Finkel: From Second Avenue to Broadway, as well as a new play by David Ives called New Jerusalem.

For someone with such a long theatre, film, and television career, Fyvush Finkel seems to keep busy, and for someone who began by making art in a 'speciality' language he has reached an amazingly wide audience. Such is the nature of the melting pot.

Obviously Finkel himself is more lovable than many of the characters he has played. One website commenter remarked after meeting him that he was a 'mensch' - a Yiddish expression of great approbation. Ian, one of his two sons, maintains a website in his honour. Finkel and his wife Trudi, née Lieberman, were married from 1947 until her death in 2008.

We're pretty sure she didn't make him pay rent.

Want to see Fyvush Finkel? If you live in New York City, that should be easy: keep your eye out for Broadway and off-Broadway appearances.

If you don't, try YouTube. Just search for 'Fyvush Finkel' to find him singing, dancing, and chatting.

In areas where this link is available, the IMDb Video Links will allow you to watch some episodes of Picket Fences for free. We recommend this as an enjoyable, though possibly confusing, experience.

1Ray Walston was known to US audiences as 'Uncle Martin', the kindly but dry-witted alien visitor in the 1960s series My Favorite Martian.2That's the Brighton Beach in New York City, not the Brighton Beach on the south coast of England.