Bog Butter Content from the guide to life, the universe and everything 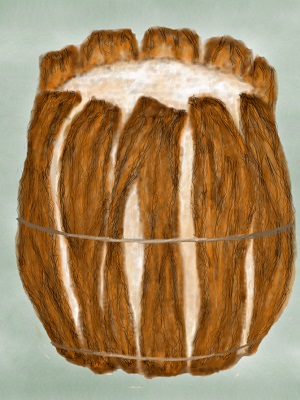 It's a national treasure, you can't be going hacking bits of it off for your toast!
– Carol Smith, Conservator, National Museum of Ireland

Bog butter is a white, waxy, buttery substance frequently found in peat bogs, particularly in Ireland and Scotland. It is one of the more common relics of the past which turn up in bogs from time to time. It was buried on purpose by people in the past, for a number of possible reasons, and examples have been found dating from the Iron Age right up until the 19th Century.

The stuff is found in many different containers. Sometimes it's just a bare lump of butter, but other times it's wrapped in woven cloth, or animal bladders, or boxes made from woven willow rods or wicker. Most of the time, though, it's found in a two-piece wooden barrel with a separate lid. Some containers are made from separate staves, like a whiskey barrel. Along with techniques like radiocarbon dating, the kind of container often gives a clue as to the age of the find.

The number of bog butter finds makes it quite clear that this was a pretty important practice over a span of many generations. They are the most common archaeological discovery in Ireland. Let's have a look at a few of the theories about why our ancestors seemed to have a fixation with stuffing their dairy produce down soggy holes in the ground.

Refrigeration: This is probably the most down-to-earth hypothesis of the lot. Bogs have remarkable properties of preservation. The wet peat forms an air-tight seal around things which helps to preserve them. Dairy products never keep very well in the heat, and burying them in the wet ground also keeps the butter cool. Peat soils are also acidic, which means that they aren't a good home for the tiny organisms which decompose things. So the refrigeration idea has a lot of merit.

It has also been suggested that burying the butter was actually a preparation technique, designed to mature and flavour it. Thomas Dineley, an English traveller writing in 1681, speaks of butter being laid in wicker boxes, mixed with garlic, and buried for some time in the bog to mature. Dineley goes on to say that this was a special provision used during Lent. This seems unlikely - Lent is traditionally a time of fasting, so special delicacies would be more likely to be used either just before it, or just after. But it is plausible enough that the butter was 'cellared' in this way. After all, cheese is made by allowing milk to go rank underground or in caves, so it isn't unprecedented.

Ritual significance: The 'ritual' hypothesis was advanced - as it always is sooner or later - by Estyn Evans in 1947. Apart from the fact that the butter was intentionally buried, as opposed to making its way into the bog by accident, there doesn't seem to be enough evidence to jump to this conclusion. His main reasoning is that since there are so many deposits which weren't reclaimed, 'I think it highly probable...[that they]...were made for magical purposes'. Again, it isn't impossible. As Evans rightly notes, there was a lot of magic and superstition involved with the process of making butter until very recent times. All we can really say about this one is that we can't rule it out altogether.

A savings account: One of the other possibilities is that the cheesy hoardes we find today were set aside as an insurance policy. Winters are long and hungry for an Iron Age subsistence farmer, after all, so it makes sense to have a morsel or two to fall back on. Theft or destruction of food was also a common weapon of war, just as it is much later in history, so it certainly makes sense to have a reserve.

Can You Eat It?

Apparently so, yes. At least, it won't kill you, but it probably won't be to everyone's taste. A few brave souls have tried it. People who lacked Carol Smith's scruples about munching away on important historical artefacts have tried it, and the reports are mostly unfavourable. It has been described as tasting rather cheesy. Descriptions run from being like a dried-out Cheshire cheese to resembling athlete's foot. The modern consumer might also be put off by the numerous animal hairs found in it.

Then again, maybe it's unwise to expect deliciousness from a mouthful of something that's 500 years older than Julius Caesar.