Cissbury Ring - West Sussex, UK Content from the guide to life, the universe and everything 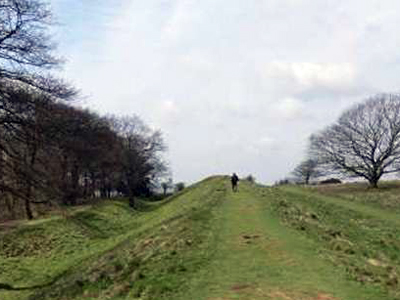 If you visit Cissbury Ring, near Worthing, you are walking on millennia of history. The Ring is the second biggest Iron Age hill fort in England1, one of a line of such forts along the South Downs between Kent and Dorset. But its history goes back much further than that.

The fort was constructed in the third century BC, by Celtic people who came to Britain from the south east. With them they brought the use of iron to make tools, gradually replacing bronze and stone. Instead of being semi-nomadic herdsmen, like earlier people, they were farmers who grew crops. They were warlike and probably had a tribal social structure. The hill forts they built on the downs weren't simply military. The biggest ones, like Cissbury, were tribal centres and might have resembled walled towns.

At Cissbury, the hill fort covers 65 acres (26 hectares), and the enclosing wall is over a mile (1.6 kilometres) long. The fort was constructed by digging a ditch, over 3 metres deep, and excavating an estimated 60,000 tons of chalk. This was piled inside the ditch to form a bank, topped by a wooden palisade. The structure is still impressive but when it was new, with walls of shining chalk, it must have looked formidable.

The hill fort was probably abandoned before the Romans arrived in 43 AD, but reoccupied towards the end of the Roman period, possibly as a defence against the Saxons.

Towards the western end of the ring, there are many humps and hollows, which are the remains of flint mines dating back to about 3000 BC. There are as many as 250 pits, some as deep as 40 feet (12 metres).

These were dug by Neolithic people, who used flint to make knives, axes, scrapers and arrowheads. Flint could be split to produce a hard cutting edge, which was then knapped2 into shape. The people obviously knew where the best flints were to be found, because they dug bell-shaped pits, with narrow openings and flat bottoms in the best flint-bearing strata. Horizontal chambers radiated from the shafts, inter-linking some of the pits. Cissbury was one of the main centres for flint mining in Southern England.

These days the importance of Cissbury Ring is fully recognised - it lies in the South Downs National Park, is managed by the National Trust and is a scheduled Ancient Monument. The hill rises 650 feet (184 metres) above the village of Findon and, although there is a car park at the base, there is a steep climb to the top. It is worth the effort though, for on a fine day, there are views of Chichester Cathedral, Selsey Bill and even the Isle of Wight. For the more energetic, it is possible to complete a circular walk to Cissbury Ring, starting from Steyning Bowl in the east, and returning via Chanctonbury Ring to the north, via the South Downs Way.

The chalk grassland has been continuously cropped by grazing animals, allowing a range of wild flowers to flourish. If you go in the summer, you may see butterflies, such as Marbled White, Common Blue and Chalkhill Blue. Look out for kestrels hovering over the ridge, and buzzards soaring. You may walk your dog, or stop to have a picnic, but remember to treat this ancient site with respect.

1The biggest is Maiden Castle in Dorset.2To knap: To break or chip (stone) with sharp blows, as in shaping flint or obsidian into tools.