First Songs: From Assyria to Sirius Content from the guide to life, the universe and everything 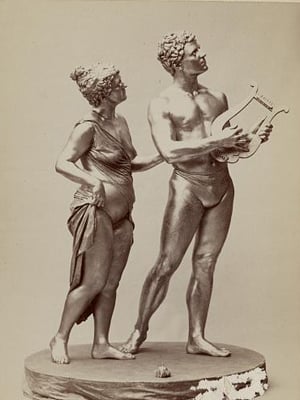 How old is music? Nobody knows. When did humans first figure out how to imitate the wind in the reeds, or the warbling of birds? It's a mystery. That first step the hunter gatherer took, from humming tunelessly while sharpening his fish-spear to singing, 'I'm gonna get you, little fishie,' is one we'd need a time machine to observe.

But we know a bit about 'firsts' when it comes to song.

We've got lyrics to some old love songs – there's even one in hieroglyphs, on an Egyptian tomb wall – but the tunes have been lost where no mp3 player can go. The oldest sheet music anybody's found so far, that is, the oldest music where the notes are written down as opposed to just the words, is in cuneiform1. It's on a clay tablet found in the 1950s in the ruins of the ancient city of Ugarit, Syria. It dates from about 1400 BC. In 1972, Prof Anne Kilmer, an Assyriologist, transcribed it from its original language, called Hurrian. The song is a hymn to Nikkal, wife of the moon god. Nikkal was the goddess of orchards, and was appealed to for her ability to grant fertility and good crops.

The text reads in part:

The sterile may they make fertile,
Grain may they bring forth.
She, the wife, will bear (children) to the father.
May she who has not yet borne children bear them.

What does it sound like? That depends on whose version you listen to. Old music notation is notoriously difficult to decipher. Different musicians have interpreted it in different ways. Try them out and see which one you like best   – your guess is as good as theirs. You can take a gander at the score there, too.

Note, though, that the oldest song we know was a hymn – something sung to praise a supernatural being. This element persists in some other song 'firsts'.

When US Southerners say, 'I like the old hymns the best,' they usually mean they like the rousing numbers published by the Stamps Baxter Company in the 1920s, such as 'Just a Little Talk with Jesus'. They aren't usually referring to the ones here.

The oldest Judaic hymn, at least the oldest recorded in the Bible, is the 'Song of Moses and Miriam' found in Exodus 15. Not surprisingly, it's a victory song about how the Hebrew god helped the people triumph over their enemies.

Both horse and driver
He has hurled into the sea.

The earliest Christian hymns were probably Jewish hymns. The gospels refer to singing at the Last Supper, for example, but don't give us the tune. The oldest known purely Christian hymn comes from the Oxyrhynchus Papyri. The manuscript is P. Oxy. XV 1786. The hymn is in Greek, and you can listen to it here. Not Justin Bieber, but pretty catchy. So far, though, we're a millennium and a half into our search, and people are still singing to deities.

Or at least, that's what they're admitting to. We may harbour a suspicion that the ditty that went, 'Flavia has the cutest dimples,' probably didn't get written down anywhere.

Not to say that there weren't love songs. Sometime during the 1st Century AD, somebody finally recorded the complete lyrics and tune to one in a form that managed to survive into the 20th Century. The Seikilos epitaph, which he inscribed to his beloved Euterpe, lasted quite a while in the vicinity of Ephesus – until a Turkish woman happened along and decided it was just the right size for a pot stand for her garden. Museum folk have rescued what's left of it, and placed it in a safe place (Copenhagen).

The tune is sort of catchy, and the words have a recognisable philosophy:

While you live, shine;
Have no grief at all;
Life exists only for a short while,
And time demands its toll.

That's the Mediterranean world for you. But let's go north.

The Oldest Song in English

Turn the calendar ahead to the 13th Century AD. Let's go to England. Maybe we can finally get away from those hymns – after all, the English are an irreligious lot. Is their 'first song' at least free from religion?

Well, it depends on what you mean. The Venerable Bede insisted in his Historia Ecclesiastica that the first hymn in English was composed by a shepherd named Cædmon. You can hear it read here. But since we don't have a tune, we usually think of 'Caedmon's Hymn' as the first English poem. So it's okay for us to call a secular song the first song.

Vulgarians rejoice – it's Sumer Is Icumen In, which is in breezy Middle English.

You've Still Got the Radio

The first song broadcast by radio, on 24 December, 1906, was 'Ombra mai fu', from Handel's   Serse. It's a beautiful song directed at a plane tree, of which is said:

A shade there never was,
of any plant,
dearer and more lovely,
or more sweet.

What was the first song sung in space?

Er, 'Jingle Bells'. In 1965. Why? And well you may ask. It seems that on 16 December, 1965, astronauts Tom Stafford and Wally Schirra, aboard the good ship Gemini 6, sent this report down to Mission Control:

We have an object, looks like a satellite going from north to south, probably in polar orbit... I see a command module and eight smaller modules in front. The pilot of the command module is wearing a red suit...

Whereupon they burst into a chorus of 'Jingle Bells', with smuggled instruments – jingle bells and a tiny harmonica. Stafford and Schirra were just following a long-standing custom of the US NORAD early-warning system, of alerting the country's children that the missile-defence system had spotted Santa on its radar. Read about it here, but you don't have to listen to it.

What will be the first song sung by a human on Mars? We don't know yet. Will it match the music of the spheres? Will it praise a god, or a tree, or the onset of good weather – or just sing the joys of being alive on a cold morning? Who knows? But there will be a first, sooner or later.

Perhaps the first song sung on an alien world will be that penned by Robert Heinlein, back in the 1950s:

We pray for one last landing
On the globe that gave us birth;
Let us rest our eyes on the friendly skies
And the cool, green hills of Earth.

You can hear the story 'The Green Hills of Earth', complete with songs.

And why shouldn't the first song on a new world be about the green hills of Earth? The first song ever celebrated much the same thing.

1Cuneiform was a system of writing used for thousands of years in the Middle East based on making wedge-shaped marks on clay tablets.