How To Make A Race Game For Up To Six Players Content from the guide to life, the universe and everything 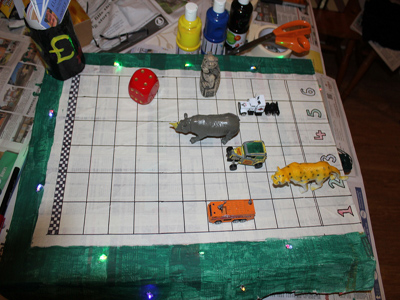 People like race games and the method used in this one allows a much more speedy and competitive feel than normal dice-based games.

When you play other games you have to wait your turn to throw the die and some people get bored waiting. In this game the benefits are reversed. Five times out of six is good for everyone and keeps everyone interested in every throw. This makes it a good game at family get-togethers like Christmas when even people who don't understand complicated games (or don't like them) can play with the rest of the family without having to do to much or learn too many rules.

The concept of the game is that it is quite quick, fun and you play it over and over again in the course of an evening or afternoon. Adults can even ask children to move their piece while they see to the meal/mow the lawn/read a book and the children will get on with it. There is no decision making other than what piece you want to be and what number lane you want to race in.

Decide On Your Theme

You need to decide what is the theme of your race before you begin construction. You may choose to link it to a real life event such as the Grand National, America's Cup, a Grand Prix1, Tour de France or other big event. This will help you decide what your playing pieces will be and how to decorate the course. You can of course have a fantasy event with characters from popular films and TV shows.

You will need a piece of flipchart paper (Butcher's paper in Australia) or a piece of cheap wallpaper (maybe lining paper) about the same size; six individually identifiable playing pieces2; some felt-tipped pens; a six-sided die; some plain paper cut up into at least 30 pieces about 5cm × 10cm (2" × 4"); a small container3 and a long straight edge.

Using the straight edge and a dark felt-tipped pen create six equal width racing lanes along the length of the paper you are using. You can use artistic licence here and leave spaces at the edges to be decorated later. This is the track. At the top of the paper write the word FINISH in big letters. At the bottom of the track write START in big letters.

Using the straight edge and pen again draw lines right across the track so that each of the boxes you create can hold the playing piece without it overlapping (too much). Repeat this until you now have a grid. There should be the same number of 'squares' on each track. In the bottom square of each track write a number. The number for the left hand track should be 1 and the next track should be 2 and so on until the right hand track box has the number 6 in it.

The small pieces of paper will be the money/prizes that you will use to bet with. If you don't like the idea of using money you could make it fuel for the cars or animal food for the farm animals or whatever. Mark all of the pieces with the same value4.

Decide who is the owner of each playing piece5. They also need to choose a number from one to six and place their piece in the square with that number, on the track. Only one player is allowed per square. If you only have two players you can let them have three pieces each6. If you have four or five players you can have the leftover pieces operated by 'the house'. The best number of players is six so that they have one playing piece each.

If you have more than six people you can allocate the following jobs to them: Money Handler; Dice Thrower; Pieces Mover and Commentator. If you have fewer people allocate the jobs among the players.

The Money Handler gives each player five of the money tokens. Before the race starts the Money Handler asks for their stake of one token to enter the race7. All of the stakes are put in the trophy pot and placed at the finish end of the track.

Once the stakes are collected the Dice Thrower asks everyone if they are ready to go. The die is cast and the number which comes up is announced by the Commentator. What makes this game different from other dice games is that the number which comes up is penalised and the piece with that number does not move. The Piece Mover moves all of the other pieces one square closer to the end. The Commentator can make up a comment about why the piece did not move forward8. As the game progresses the Commentator can remark on who is in the lead, how close the next piece is and so on.

The winner is the first piece to cross the finish line. The Commentator announces the winner(s) and the money person hands over the Trophy containing the winnings. More than one may finish at once9. If two or three players finish together the prize money is shared equally. If four or more players finish together everyone starts again adding another stake to make the win worth twice as much – the Commentator may make reference to a roll over10.

When a player runs out of stake money – this could happen after five consecutive losses – it could be agreed that the Money Handler could supply them with more tokens on loan. If you prefer more competitive gaming the player drops out when they lose all their money and the others continue – but this gets boring for the loser and it might be an idea for all the other players to count their winnings and the one (or more) with the most tokens wins. At that point all the tokens go back to the Money Handler and everyone starts from scratch with a new race meeting. Or you could call it a day and put the game away.

If you are raising money for charity you could use this game as a bit of fun. You could charge a fee to take part and have prizes such as lollies for the winner(s) of each race11.

The Commentator can make the race more exciting and it is often the case that there are several potential winners in the final stages which can also make people more excited. Encourage people to shout for their own piece or even call for the number of the leading piece to be thrown so that they will be held back while the others advance.

You may have realised that for the players to make this themselves is an activity in its own right!

1Artistic people can go to town on making the race course and decorate it to their heart's content. They could even go down the line of the model rail enthusiasts or Scalextric buffs who have little people, trees and machinery dotted about.2Toy cars are good, but toy zoo or farm animals are just as good.3The fancier or more trophy-like the better.4eg £1,000, $10,000, 100 litres/liters/gallons petrol/gas, 10 sacks animal food.5You can allow them to give it a name if they wish.6Three players have two pieces each.7They can ask for this as £1,000, or whatever is written on the note.8Oil slick on the track, sun got in the driver's eyes, donkey stopped to eat some grass etc.9But it is interesting how many times there is only one winner.10However, this is quite a rare occurrence.11You would need to check on local laws about gaming.