'Shadowmarch' by Tad Williams Content from the guide to life, the universe and everything 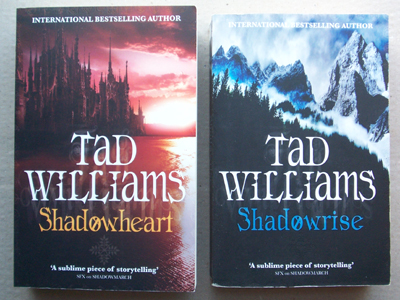 Shadowmarch is a fantasy novel published in four books written by American author Tad Williams. Although it comes in four volumes, it really is only one story; the books cannot be read individually or in a different order. As usual with the books of Tad Williams, the whole thing had to be split up for practical reasons, as each book has about 600 pages.

Shadowmarch originated as an online project. The first chapters were published on the site for free and subscriptions were needed to read more of it. This project was terminated and all chapters that had been published already were rewritten and extended to form the current books.

Eion, Xand and the Twilight Lands

The story is set mainly on the fictional continent of Eion, which is split into various smaller kingdoms, with the land Syan as their cultural and theological centre. In the far north of Eion lies the kingdom of Southmarch. Southmarch castle (and the surrounding city) are situated in a bay of the rough north-eastern sea. The ancient castle is separated from the land by a narrow bridge; the only other way there is across the water. Southmarch is ruled by the Eddons, a fair and respected family, but they are not the only ones who live on the rock of Southmarch castle. Half hidden from the humans there are different worlds. In caves in the rock under the human castle live the Funderlings, small people and master craftsmen. Deep down under the ground they hide secrets no human has ever heard about. In simple huts by the water live the amphibian Skimmers, and high up on the towers of the castle live tiny but proud Rooftoppers, hidden from human eyes.

North of Southmarch, behind the 'Shadowline' lie the Twilight Lands, home of the fairies, the Quar. They are a very diverse people in appearance and attitude but all ruled by the same king and queen who live in a castle hidden in these strange lands. All of the Twilight Lands are hidden under a veil of fog and trapped in eternal twilight and darkness. For a long time the Quar occupied all of Eion, but after being held responsible for a terrible plague, they were driven away by the humans in a bloody war. In the end the Quar hid themselves and their remaining lands in the fog 200 years before the Shadowmarch story begins. Since then Southmarch has also been called Shadowmarch. The humans fear the Twilight Lands and everything that comes from there, although the Quar hardly ever make an appearance.

South of Eion, separated from it by the sea, lies the continent of Xand, ruled by the Autarch of Xis, a god-king to his people. It is a land of oriental appearance, consisting of deserts and oases. The current Autarch, Sulepis, is young but cruel and heartless. He lives in a huge palace with his many brides, servants and soldiers. He knows that he has the power to do whatever he pleases and the northern kingdoms of Eion have caught his attention.

As in most of Tad Williams' books, the story is told from the point of view of many different characters. The reader never knows more than they do or what they see at the moment. Everything is told from a third person perspective, but always with the feelings and knowledge of a character in mind. The following is only a small selection of the many characters that appear in the book.

Briony Eddon, the princess of Southmarch, can be regarded as the main character of the story. At the beginning of the first book she is a young woman of 15 years and still a bit childish. She is intelligent and tomboyish, defying the conventions at the court. In the course of the story she grows up to be a very strong woman and learns to handle her role in politics very well.

Barrick Eddon is Briony's beloved twin brother. He is in poor health and one of his arms is crippled. He is stubborn, short-tempered and moody, usually not good company.

Ferras Vansen, the captain of the royal guard of Southmarch, is a thoughtful dreamer and kind-hearted. He has always been loyal to the royal family and is fond of Briony Eddon. Although he knows that he can never court a princess, he would do anything for her.

Chert Blue Quartz is a Funderling craftsman who lives in a small house under Southmarch Castle with his wife Opal. They are an old couple and love each other dearly but are often engaged in minor quarrels.

Qinnitan is a young woman, originally an acolyte at a temple in Xis, chosen by the Autarch to be one of his many brides. She comes from an ordinary family and grew up in the streets of the city. She would prefer her freedom to living a life in the temple or in seclusion, even though she is told that it is an honour to be chosen.

Yasammez, Lady Porcupine, is military leader and a high-ranking noble of the Quar. She is grim and terrifying, but not evil. She fights for her people and her king, struggling to achieve a mysterious goal. She sees attacking Southmarch as the only way to achieve it.

WARNING: The following may contain spoilers.

King Olin Eddon is held captive by Ludis Drakava, the Lord Protector of Hierosol, a kingdom in the south of Eion. While he is gone his eldest son Kendrick rules over Southmarch. In exchange for the king, Ludis asks for money and the hand of Briony. Before a decision can be made, Kendrick is brutally killed with a weapon belonging to Shaso, the master-of-arms of Southmarch and friend of the royal family.

Before the murder can be resolved the Quar suddenly attack human lands. Barrick goes to war, accompanied by Vansen who has promised Briony to protect her brother. Barrick mysteriously disappears behind the Shadowline, sent there by Yasammez. Vanson follows the prince. Southmarch falls into the hands of the Eddons' cousin, Hedon Tolly, who strives for power, and Briony herself has to leave her home in search of allies who help to regain the throne and defend Southmarch against the Quar who approach the royal castle.

Qinnitan is living in the seclusion of the palace in Xis. It is a large area with many buildings. Life here is dependent on the eunuchs who watch over the wives of the king. It is a life of intrigues and struggles for the attention of the king. Soon Qinnitan gets into difficulties that leave her no option but to flee from the palace.

Chert and Opal find a strange human boy close to the Shadowline. It seems he comes from the Twilight Lands. As Opal always wanted a child they take him home and give him the name Flint. He soon turns out to be even more mysterious than they thought at the start. Flint explores the castle and the most secret tunnels of the Funderlings. He seems to have a mission, which puzzles and worries Chert.

So begins the story of a quest, not for precious items, but for the truth, for allies and knowledge, and the uncovering of the greatest mysteries of humans and Quar.

Every chapter of Shadowmarch starts with a short excerpt of a sacred book of Eion, Xis or the Quar. As in other books by Tad Williams, where similar texts are used, the reader may at first think that they are just unimportant quotes, but their meaning slowly becomes clear and begins to connect with the story.

Although Shadowmarch is a fantasy story, it seems very real. All the characters are realistic and well-developed. While at first glance it may seem like good and evil in the book are conventionally divided as humans and non-humans, this is not at all true; the relationship is a lot more complex than that.

Parts of the story, or more likely the setting, seem quite similar to Tad Williams' earlier trilogy novel Memory, Sorrow and Thorn, for instance the tunnels under Southmarch, the Quar and Yasammez. But the style and attitude of the story is certainly different and more complex. It seems to be further removed from being a classic fantasy novel than are the earlier books.

As usual Tad Williams seems to tell not just one story but many stories at once, that sometimes seem to form an intangible net, resolving slowly as single strings get connected and the reader finally sees the big picture at the end. Apparently unimportant side stories suddenly get a meaning hundreds of pages later, and it all starts to make sense. Only in the last few pages does the reader really understand what is going on.