Bat People, Sea Serpents and Hogzilla - Is Seeing Believing? Content from the guide to life, the universe and everything 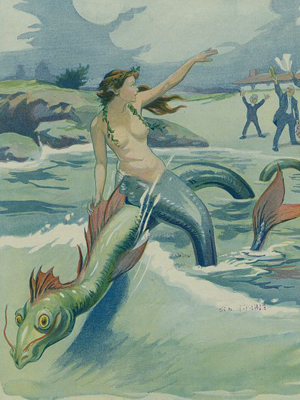 21st-Century people like to be modern, and skeptical, and well-informed. They use the Internet to keep abreast of the latest news, and sift their factoids carefully. They pride themselves on being less gullible than those newspaper readers of yore who fell for this story:

The specimen of lunar vegetation, however, which they had already seen, had decided a question of too exciting an interest to induce them to retard its exit. It had demonstrated that the moon has an atmosphere constituted similarly to our own, and capable of sustaining organized, and therefore, most probably, animal life.
–   New York Sun, 1835.

O-kayyy... We laugh, but then we've got NASA photos. Besides the Great Moon Hoax, Richard Adams Locke, author, was larded in enough technobabble to back up a whole Star Trek franchise. It all sounded pretty good until he threw in the bat-people. Readers expected miracles in 1835, and he gave them one. A made-up one, to be sure.

The wary consumer of exciting news has to ask, though: how do you tell truth from lie?

Monster of the Deep?

It is a well-known fact: we know more about outer space than we do about the bottom of the ocean these days. Understandably, we are skeptical when stories emerge that seem to confirm what we have often dismissed as sailor's yarns. Take sea serpents. Everybody knows they're fantasy, right?

Yikes, there's a news item going around the web. With pictures. About a sea serpent. Worse still, the thing's been seen in Mexico, Australia, and Scotland, and other places. What gives?

We can be forgiven for skepticism about this sketch from 1860. Sketches? Worse than photoshop. Besides, people were gullible in the 19th and early 20th Centuries. They believed in all kinds of things we don't, such as fairies. (We know, we saw the pictures.) So they claimed they saw a sea serpent in Bermuda? It's not like they had a mobile phone camera, and nobody tweeted it, so it must not be true.

But here they are, all over the Internet: sea serpents. Well, long pointy, scary-looking fish. What are these things?

As it turns out, they're oarfish. The oarfish – the largest bony fish known to exist – can grow up to nine metres long. It's a harmless plankton-eater. We are mostly harmless to it, for one thing because it tastes terrible. Also, it lives in very deep water, and only comes up when it's dying. It's a plentiful species, not endangered, and its appearance on a beach merely causes excitement at the oddity of it all. It's a creepy-looking critter, though, and probably caused all those sea-serpent stories in days of yore.

So, fine: we should be open-minded. Seeing is believing. We've seen an oarfish – digitally photographed, anyway – and we are enlightened. So it's safe to fish the online waters, right?

Er, what about the other monster? You know, the one that washed up in New York?

They called it the Montauk Monster. It washed ashore in New York in 2008. It was monumentally ugly. As the pictures circulated on the Internet, so did the rumours that this was some sort of prehistoric creature, possibly with a dinosaur's beak.

The creature was never physically examined. Based on the photograph, the opinion of palaeozoologist Darren Naish was that this was a dead raccoon. Most people don't see too many animals that have been in the water for that long, so they don't know what to expect.

Four years later, in 2012, another 'monster' showed up in New York. A New Yorker was ready with his camera when this washed up under the Brooklyn Bridge. The verdict? Take your pick: a dog, a giant rat(!), a mutant pig, an aardvark, a raccoon (another one?), a possum...

New York must be getting used to this.

So, skepticism about online photos. Besides, anything too large or ugly to be believed is a photoshop hoax, right? Maybe not.

In 2004, a story and photo circulated on the web that a man in Alapaha, Georgia, USA, population 682, had shot and killed a feral pig about nine feet long and weighing approximately 1,000 pounds. Unfortunately, all he had for proof was a photo. People found it hard to believe that 'Hogzilla' ever existed. They'd heard of forced perspective. Eventually snopes.com investigated – and decided the issue wasn't so clear-cut.

For one thing, it is not unknown for hogs to weigh 1,000 pounds. In 2007, 11-year-old Jamison Stone shot a hog weighing at least that much at a hunting preserve near Delta, Alabama, USA. When the Internet story was doubted, Jamison's dad was irked. He chased down the owner of the hunting preserve, and was outraged to discover that the hog in question was not, in fact, feral, but an oversized domesticated pig. Nonetheless, it was very, very large.

So what have we learned?

Is seeing believing? No. Read the footnotes, and check the sources1.

Image supplied by the Library of Congress
1And be sure you're not reading The Onion.