Zombie Dice - the Game Content from the guide to life, the universe and everything 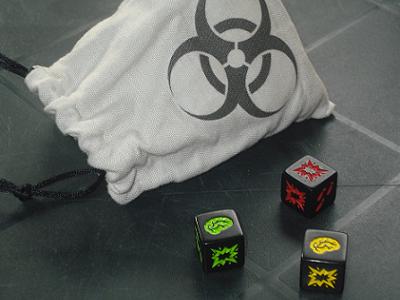 Zombie Dice is a dice-rolling game for two to eight Zombies, or players, although you could play with a whole infestation if you wanted to. Created by Steve Jackson1, it's a very simple game to learn and play. It consists of 13 black dice, all marked with three differing engraved symbols in three different colours; red, yellow and green. The symbols are:

An expansion set called Zombie Dice 2 - Double Feature includes a Hunk (or football 'jock'), Hottie (or 'babe') and Santa Claus (or 'St. Nick') dice, enabling slightly different gameplay that resonates with many Zombie films. For the purposes of this Entry, however, the original game will be explained.

The basic premise of the game is that you are a Zombie, and the dice are your potential victims. How you became a Zombie isn't really important to the gameplay; you could have been infected by a virus, been bitten by a Zombie 'friend', or watched too much daytime television. Anyway, as a Zombie your raison d'être2 is eating human brains. Of course. So, playing Zombie Dice is a simple matter of eating brains by rolling these on the dice. The Zombie who eats 13 brains first is the winner, with gameplay usually lasting around half an hour.

Zombie Dice is a tabletop game that can be played just about anywhere, as long as there's a flat surface to roll the dice upon. Play it at home, at work, at the pub, on a train or maybe plane. Perhaps even play it to occupy the time during those long hours between Zombie attacks when the Apocalypse comes to pass...

There are three basic steps to playing Zombie Dice:

After each roll, see what comes up. You divide the results as follows;

After a roll of the dice, you can then either take your chances and continue to roll to collect brains, or pass the dice to the next player. Be wary, if you continue to roll, getting three or more shotgun blasts during your turn you are then considered a dead Zombie4. You then lose all your collected brains and play passes onto the next Zombie. Therein lies the rub; if you pass, you could potentially let another Zombie eat more brains than you on their turn! Play continues this way until all Zombies have had a roll of the dice, and this ends a round.

Zombies must draw three dice on each turn. Unless you have any footsteps in your hand, then you draw up to three, ie; if you had two footsteps dice on your roll, keep these and draw one die for your next roll. If there aren't enough dice to draw three because they are marking brains or shotguns with yourself or other Zombies in the game, simply make a record of how many brains or shotgun blasts there are amongst the Zombies and place dice back into the cup / bag.

It's down to luck and chance. No, really! Depending on the numbers of Zombies in the game, play continues until one Zombie has eaten 13 brains at the end of a round - and they are the winner. Each Zombie has a good chance of collecting the necessary 13 brains on their turn, due to the probability of getting brains on each roll. The 13 dice are divided up as follows; there are three red, four yellow and six green. The red dice have only one brain but three shotgun blasts, the yellow have two brains and two shotgun blasts and the green have three brains but only one shotgun blast. The remainder of each six-sided die is completed with the footstep symbols.

Hence, the colours on the dice indicate how difficult it is to roll a brain symbol on each turn, as there are less of that particular type on the more difficult dice; red being harder to get a brain, yellow middling and green being pretty easy to roll up a brain to collect. If you happen to pull more green dice from the cup / bag than red or yellow on your turn, you have more chance of collecting enough brains to win on each roll. It's never a certainty though, as there are still shotgun blasts and footsteps on the green dice, allowing for the potential to lose all your collected brains in one go! Very discouraging if you have eaten 12 brains and then roll three shotgun blasts...

Because of the simplicity of Zombie Dice it is suitable as a family game, with children as young as eight years of age enjoying the pretence of being a Zombie and eating brains. It is fun to add alternative playing choices to Zombie Dice too. More experienced players may like to mix it up by having varying coloured brains score more points, such as one point for green, two for yellow and five for red. The final Brain Count can then be a lot higher, allowing for a longer game.

Zombie Dice is great to play at Halloween or Zombie-themed parties, and for each brain eaten during play the Zombies must either have a drink, or eat an actual 'brain' (peanuts alongside beer is a simple and enjoyable choice for adult players). Also ensure you add appropriate sound effects while playing; 'Grr, Argh', shotgun blasts and high-pitched Pythonesque shouts of 'Run Away!' can add a little more ambience to the occasion.

The game can be bought boxed, with all 13 dice and instructions enclosed in a small suitably Zombie-fied cardboard cup with plastic lid, and you can also get the expansion set too. However, if you want to play Zombie Dice and don't want the hassle of carrying the cup and 13 cubes of fun around in your pocket, you can download a mobile phone application that enables you to play virtually. You can also download further 'apps' that can keep score of your brains collected while playing, if you've not got pen and paper to hand.

Zombie Dice is very popular with Zombie fans, and gamers alike, and has won the 2010 Origin Awards for Best Family, Party or Children's Game. If you want to find out more, it's recommended you visit the Zombie Dice website, or your local friendly games/comics store and chat to the proprietor, as they are bound to stock it. Or at least get it in for you. If not, feel free to eat them. Mmm, brains!!!

1Responsible for many other games including GURPS (Generic Universal Role-playing System), Munchkin, Frag and Fighting Fantasy Gamebooks.2Reason for existence.3Many players like to get their own bag for their Zombie Dice. You can purchase a genuine Zombie Dice bag™, or use your own. One with a suitable bio-hazard symbol is fun, or any other small bag with a drawstring is best, as long as you can get your hand in it okay to draw out the dice.4Yes, Zombies are already dead, but you get the idea.