A Walk From Shrewsbury to Uffington Content from the guide to life, the universe and everything 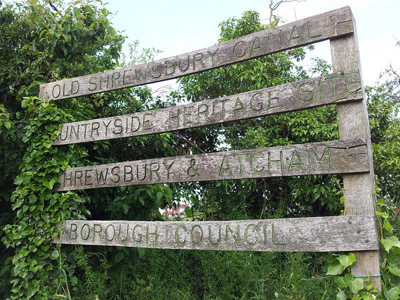 The Shropshire Union Canal, which started at Norbury Junction and terminated in Shrewsbury, is not currently in operation and most of the canal is lost for the time being. Whilst there is a Society dedicated to re-opening the canal in the future, for now we have to content ourselves with walking along its route.

This route has no steps but does have two short, steep sections. Otherwise the path is firm and level, although the ground is coarse stones at some points which makes negotiating with wheelchair or buggy a bit more difficult. It is about three miles in length. Although the route is quite isolated in places, the area is reasonable safe and as it is National Cycle Route 81 there are usually a few cyclists and walkers using the path.

This route won't show you the prettiest sights of Shrewsbury town. It will wind through housing estates, along a road, and under the busy A5. However, these sections are interspersed with lovely canal-side walking next to the remnants of the old waterway, views to the river Severn, and tree lined paths. Finally you will end up at Haughmond Hill, one of the final hills before the Shropshire Plain, which has some glorious walks, a ruined Abbey to explore1, and stunning views across the local area.

You are joining the canal at its original termination. Although the basin and wharf are now buildings and a yard for Morris Lubricants, you can see the final bridge to your left, now hidden by a chain-link fence and overgrown with buddleia bushes and vegetation.

The canal was originally built as part of the coal and iron transport network that was centred at local Coalbrookdale, which is now known as Ironbridge after the famous bridge spanning the River Severn. The Shrewsbury branch was opened in 1797 and used tub boats, rather than narrow boats to transport its cargo. It wasn't connected to the main canal network until 1835, when it was linked to the rest of the canal network at Norbury Junction via Newport2.

You are now on the canal route. This section of canal runs around the back of the Castlefields area of Shrewsbury. This section is a bit bumpy in places but it is firm and easy to follow. Continue through the back of the housing estate and along the edge of the park until you reach the main road.

Castlefields was originally, like its name, fields, and you were out of Shrewsbury and in the countryside. This is a far cry from its current status, as Shrewsbury grows northwards to absorb the local villages into the conurbation. Castlefields, Ditherington, Sundorne, Harlescott and Battlefield are now merged into one long suburb.

This section of the walk is not on the original route, which has been built over or is inaccessible.

As you rejoin the road, look at the wall on the left. There's a plaque here for 'Factory Bridge - No. 47 - Rebuilt 1913', although the bridge itself is gone. The canal originally continued under the road towards the flax mill. The Ditherington Flax Mill is the world's first iron-framed building, and while it may not look that impressive it is the grandfather of all skyscrapers.

Once you leave the road, take the left hand of the two paths that run parallel to each other. You are now back on the canal and it's plain sailing from now on. This section of the canal manages to feel surprising rural whilst slipping between two housing estates in Ditherington. Birds start to appear on branches around you, including wrens, which are no longer common in most towns. This section only lasts a few hundred yards, and rises to meet Telford Way, where you can use the crossing to move on to the next section, or you may use the underpass.

The start of this section, known as Spring Gardens, has a brand new housing estate. Originally this area contained a wharf. There was some hope that this might be restored, but the land was cleared and the building of the estate began in 2010.

This is the longest section, and requires no directions – just continue along the path. Although we're now technically in Sundorne, you wouldn't really notice it because the canal gives the impression that it's in the countryside. You are now on the Heritage Trail, and you are starting to leave Shrewsbury. This section moves down the back of Sundorne Road houses, and gets closer to the River Severn which you can glimpse on your right.

This is when the walk starts to feel like a proper walk. About half way along this section you will notice a ditch begin to form on your left, which gradually increases in depth and then fills with water. This is all that remains of the actual canal. It is not navigable (except possibly with a small canoe!) but provides a habitat for ducks and pond life.

As the path crosses over a small road this is the site of the Pimley Manor bridge, now long gone. Pimley Manor itself is the home to a small business estate, so watch out for the odd car before you cross, but otherwise this area is very quiet. The Manor itself is said to be haunted by two spirits - a lady in white and a black swirling mist. You can see the large house itself on your right as you continue on this bit of tarmacked path.

On your left is a patch of land that used to be the 'Sundorne Pools', which is thought to have been a reservoir for the canal. Now though, they are fields. The path now dips down below the A5 through an underpass - one consolation in an otherwise sad tale of dereliction and destruction since the canal was declared abandoned in 1944 and sold off in the 1960s.

We are now truly in the countryside, surrounded by fields and not a house in sight! The canal continues, and the path follows it, albeit at a slightly higher height. Keep your eyes to the right and you can see the remains of an old canal feature by a small bridge, some of which is held together by tree roots!

As you emerge from the end of the road, you are at the site of the old bridge and wharf at the village of Uffington. If you cross the road here please do carefully as it's a nasty bend, but you will be rewarded by peeking through the trees into the last remaining bit of water of the canal.

From here you can continue along this track up to Haughmond Hill or you can turn back into the village, wander along the main road and have a pint at the Corbet Arms, which has a lovely garden out the back which overlooks the River Severn as it snakes its way through the plain. A lovely end to a lovely walk.

With thanks to the Shrewsbury and Newport Canals Trust, whose website provides the lovely black and white images of structures now long gone.

1As the site is owned by English Heritage there is a small fee to pay.2Newport, Shropshire.