Dragon Curves - The Mathematics of Paperfolding Content from the guide to life, the universe and everything 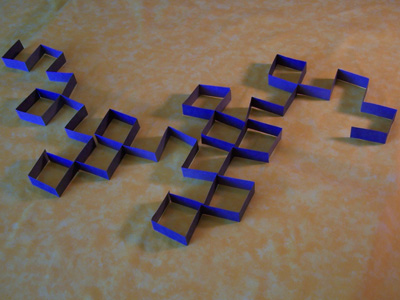 Dragon curves are so-called space-filling curves1, a type of fractal curve. Think of them as a line turning left or right many, many times. Like the Koch snowflake curve and the Gosper curve, they are created by starting with a simple pattern, in this case a single line segment, and then repeatedly replacing each line segment in the pattern with a more complex shape composed of smaller line segments. Each time this process of replacement is carried out is known as an iteration2. The more iterations carried out, the more complex the curve becomes, and in the extreme as the number of iterations tends towards infinity, the curve becomes fractal.

Since these patterns are difficult to construct, we're going to present two simpler methods for making a dragon curve. And since infinity can be dealt with in your mind but not in the following experiment, we will approximate the fractal curve using fewer iterations.

In this case, paperfolding does not refer to origami or paper planes. We are going to fold a long, thin strip of paper.

After unfolding the paper the first time, you get a level one dragon curve - a right angle. After each further repetition, the level increases by one3.

To get a proper dragon curve, you should at least reach ten iterations. But paper does not like to be folded that often and will not only complain but strike, so here is a method for drawing a dragon curve by manipulating a string of symbols.

A String of Directions

You will need a pencil, an eraser, and two sheets of squared paper.

The first sheet is for the actual curve, which is drawn on the lines. Start by connecting two intersections. This is a level zero dragon curve.

The second sheet is for the drawing instruction. It will consist of two symbols, for example L and R, which stand for left and right turns. There are no further operations we need.

Now let us construct an instruction. Start with R for Right4 and underline it: R. This is your string of symbols. There's only one symbol in it so far, but it will grow rapidly.

For every further iteration, repeat the following instructions once.

Starting with an R, the sequence after the first iteration of the procedure will be RRL. After the second iteration, we will have RRLRRLL. The next steps will be:

Now draw the dragon curve on the first sheet, using the sequences of R and L to tell you which way to turn. Turn right from the first line, then right again, left, twice right, twice left and so on5. What you get is a dragon curve. It is called that because of its similarity to a swimming or flying dragon with head, tail and claws.

And What is it Good For?

If you went successfully through the Entry so far, take a deep breath: you managed the difficult part. Now we will look at some of the figure's interesting properties.

It is rather obvious that the curve's length gets bigger and bigger with increasing iterations and finally tends to infinity. The fractal also contains very strong self-similarity, which is evident, regarding the repeating pattern of high-level dragon curves. But there is also another kind of self-similarity.

Get yourself a dragon curve with 6 to 8 iterations. Now connect every second corner, preferably with a striking colour so you can see what the new curve looks like. If you want to try this out before getting the explanation, do not read this footnote6.

Look at the shape of the space enclosed by the curve. If you think it to be rather irregular, you will be surprised by the fact a plane can be tiled by dragon curves, as seen here. This works due to the fact a dragon curve is composed of smaller copies of itself.

Although the dragon curve is a strange looking fractal, its dimensions are unexpectedly simple. If we call the distance between the beginning and end points one unit, the smallest rectangle the complete curve fits into will measure 1 x 1.5 units. Connecting the two points mentioned above with a straight line, it will divide the rectangle in two parts, the bigger one having twice the area of the smaller one.

There is no real use for the dragon curve, as for many other fractals, thus we can conclude it has to be art, as Oscar Wilde would say. Its regularity and simplicity have fascinated and inspired many people - although it is derived from a routine act like paperfolding. 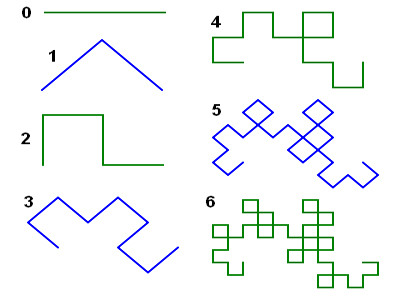 1A curve is a bendy line, with length but no thickness. A space-filling curve is an apparent paradox, a curve that bends in such a convoluted way that every point in an area is on the curve.2An iteration is a single procedure that will be repeated again and again. Do not be confused with the process of repetition, which is another thing.3If you fail to imagine more iterations, look up this animation of rising iterations.4In fact, the symbols are exchangeable. If you do not like starting with a right turn, regard L as right and R as left.5The line you get will never cross itself. If it does so, you may have made a mistake. It will, however, touch itself in places without crossing.6Surprise: Another dragon curve! And you can repeat this procedure. Guess what you get. Repeating until there are no more points to connect will give you a single line, the level zero dragon curve mentioned above.