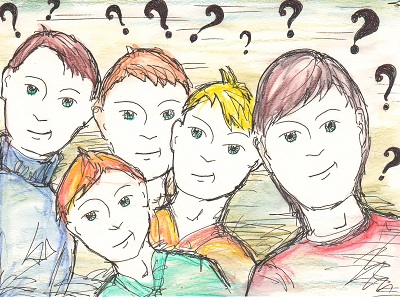 Prosopagnosia: from the Greek 'prosopon', face, and 'agnosia', not knowing. Sometimes called 'face-blindness'. Its related disorder, prosopamnesia, the inability to remember faces. The disorder is not common, and scientists are only beginning to study it deeply. There is no cure, and the adjustments required are personal and involve common-sense strategies, so there is nothing there to interest a pharmaceutical company. You may know someone who has it, and not be aware of it – though you may think he is unfriendly or 'stuck-up'. You may have it, and not know it, or be aware of it, but not know what it is called.

The inability to recognise or remember faces can leave you lost when you and your partner become separated in a crowd. Prosopagnosia can make parties a trial as you attempt to recognise people divorced from their native habitats. The condition will certainly render you useless as an eyewitness. 'Do you see the assailant in this courtroom?' 'Er, no. It might be the judge, as far as I can tell.'

The following is a personal account of living with the condition of prosopagnosia. The impetus to tell this story came from watching the film Faces in the Crowd, a thriller that depicts (rather accurately) the experience of prosopagnosia from the point of view of a woman who suddenly becomes 'face-blind' after a head injury. The thriller part involves the fact that she can't identify her attacker – a serial killer who may be meeting her in public places. After seeing the film, I had an interesting discussion with my viewing partner, who scores in the normal range for facial recognition. She was surprised that I often wasn't able to tell when the actors had been substituted. Yes, well, it's like that.

According to science, even sheep can recognise each other's faces. The gift appears to come with membership in the group: being unable to tell your neighbour from the postman is not only a handicap, but a reason for feeling like an outsider in the human race. Nor is facial recognition limited to sapient and sentient beings. These days, even computer software can do it, although the prospect frightens some people.

Prosopagnosia – the inability to do what a sheep or a piece of Homeland Security software can do – can be inborn. It can accompany autism or Asperger's. I have neither condition. I do not know whether my prosopagnosia, which medical science believes can be caused by a lesion in the area of the temporal lobe known as the fusiform gyrus, came from the tumble I took off my high chair at eighteen months – the one that knocked me out cold and scared my young parents. Although the condition may be hereditary, I don't know if any family members have it, because they've never discussed it. I only know that for as long as I can remember, seeing people, even those close to me, out of context leads to confusion.

I was hardly aware of the condition while growing up. School, church, home: all provided safe and predictable contexts. I didn't realise that I was using other clues besides facial recognition to distinguish my nearest and dearest. In fact, I was not aware that other people relied on facial cues to tell each other apart. It hardly came up – and when it did, I put it down to social awkwardness on my part. It was not until I attended a major university with 20,000 undergraduates that the real trouble started. The day I found myself looking out a window, suddenly very afraid that I would not recognise my girlfriend when she came back from class, was the day I realised that I had a problem for which I had no name.

The term prosopagnosia was coined in 1947 by German neurologist Joachim Bodamer. Long considered an extremely rare condition, prosopagnosia is now thought to affect up to two percent of the population. As prosopagnosia is not something you usually want to discuss, and won't show up in a routine physical, it is partly due to the openness of internet discussion that the face-blind are finding one another, and the condition is reaching public awareness. Some people worry about the implication of all this for such jobs as airport security. Some sufferers are, predictably, forming online support groups – although a recent google check indicates only mild user interest. One blogger's posted invitation to discuss the problem had no comments at all in over a year. Since the original work in 1947, over 100 papers have been published on the subject. It is possible to participate in research, at least if you live near Bournemouth.

How do you cope with the fact that it is unnatural not to recognise someone you've been working with for months when you see him at the mall? You use sly strategies: you memorise gait, mannerisms, speech...something solid and stable, such as an unusual pair of glasses, or a signature jacket. It is important in this scenario to avoid the 'billboard problem': a friend once lost a favourite driving shortcut when the sign company changed the roadside advertising she was using as a landmark. It's the same way with people: the subject might stop wearing that loud tie.

When caught flat-footed, vamp like mad. 'Oh, hello,' (smile innocuously), 'Nice to see you. What brings you to the bookstore this evening?'

'I promised Cheryl I'd meet her when she finished work.' Ah, Cheryl's his wife. That's Jim. Great, got it in one.

The glassy stare, followed by, 'I've been working here for the last ten years,' is the harbinger of the other bad side effect of prosopagnosia: acquaintances who decide you're too snobbish to remember them leave you alone in future. It makes sense. Who wants to know someone who can't be bothered to remember what you look like?

Worse still, you can be thought racist. At the restaurant for the office Christmas party, you're confronted by coworkers dressed to the nines, rather than in familiar 'I Heart Conan' sweatshirts. Is the cheerful, short Asian fellow in the rumpled suit the familiar figure from the next cubicle, or the similarly-sized techie from across the hall? Ah, here comes your Asian boss: a head taller than you, and nattily dressed as ever. At least you know who he is.

You look for clues without knowing that you're doing it. Some people are easier to locate than others. Is that the reason all your youthful crushes were on redheads? Familiarity makes a comfort zone. The upside is, you're not lookist: an easily-recognised person may seem comical to others, but be very welcome in your sight.

Also welcome are those rare persons who seem not to believe that you should automatically recognise them – who are the first to greet, who contextualise the acquaintance for you. 'Hey, there, how have you been? How's your bowling score? Bowled any Brooklyn spares lately?' Eureka. I know this guy, he belongs to the club, we had a good laugh during bowling night...

The Face in the Mirror

What about your own face? Could you pick yourself out in a crowd? Er, no. Okay, the group portrait is easy – you were wearing a red shirt. But...oh, my, do I look like that? The face in the mirror can be unnerving. You become adept at looking only at your hair to see if you've combed it, while avoiding eye contact with the stranger staring back at you. You're not sure what he's capable of.

What prosopagnosia doesn't mean is that you don't know people. Of course you do. You fully recognise the warmth, wit, and personality of your fellow man. The fact that you might walk by him on the street is something else again. You cope the best way you can, and try not to feel too disturbed by the fact that you know your dog's face better than your best friend's.

After all, no two Shih Tzus look alike.

Not sure whether you have prosopagnosia? Or just want to test your own talent for facial recognition? Cambridge has some interesting tests.