Applying for an International Adoption Content from the guide to life, the universe and everything 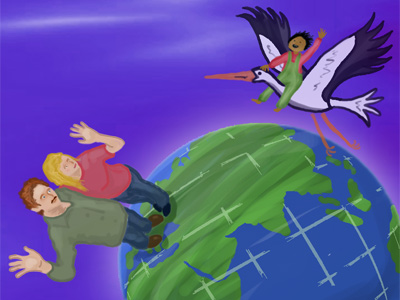 Wow! International adoption! Just like Madonna and Brangelina! Jetting into a poor third world country, visiting an orphanage or two and then flying away again with a cute baby in your arms!

No. Individual experiences with international adoption will vary a lot depending on the country that you are based in, and the country you are adopting from, but you can be more or less sure that it will not be a Hollywood experience. Patience, self control and a thick skin will be your key attributes.

Oh. How disappointing. I bet you're going to tell me that there are lots of forms to fill in now?

Absolutely. The bureaucracy is extremely extensive. The Hague Treaty on International Adoption has now largely codified how adoption should work, and what rules should apply. This is a very good thing, of course, designed to avoid different forms of abuse, unethical behaviour, adoption failures and so on, but it does mean shifting a lot of paper, putting together all sorts of certificates and proofs, and filling in forms in quintuplicate and having them stamped by legions of translators, lawyers and embassy staff. By the end of the process you will either be highly organised or you will have torn most of your hair out. If your own paperwork is complex (you emigrated for example) then the whole process is likely to be even more Kafkaesque.

And all this form filling, that's going to take a long time I imagine?

Well yes - a typical adoption procedure could take between two and five years from start to finish. But most of that is not the paperwork; it's the courses, being approved by your national authority, and then waiting for a child. Especially waiting for a child. It depends where you come from as well - the US is quicker than Europe.

Courses! Nobody made me go on any courses before I went with Gary in the back of that Ford Cortina - since when do you need a licence to be a parent?

It's a fair point. It's particularly odd for would-be adoptive parents who already have biological children, but can't have any more that way. On the other hand, the courses are a response to the problems of earlier adoptions, where there were a lot of 'failures' - adopted children who were not attached to their families, or who ended up in trouble etc. A good adoption course will not try to teach you to be a good parent, rather it will explain to you the specifics and the psychology of adopted children and how to handle them. And it's a good way to meet with other prospective parents in the same boat. A good agency will also offer advice and support after you have adopted, in case you are finding it difficult.

So you've got courses, procedures, international agreements – sounds like all is very much above board and under control these days?

For most adoptive parents, this is pretty much the case. However, there can still be a number of problems. The first one is countries with children to adopt, but rumours and sometimes proven cases of very dubious practice - false orphans, children being declared eligible when they are not, or even baby selling and kidnapping. Within this, you have countries where there is a systemic problem. Ethically sound parents, adoption agencies and countries will not adopt from these places. But some do. Then you have countries where broadly the system is under control, but there are occasional problems of corruption or similar.

In addition, the information for parents and procedures are not all of the same standard. In the US, for example, there is relatively little in terms of obligatory training. Adoption agencies may put photos of children on their website, and compete for business on that basis. In Europe, this is not allowed. Poorly prepared parents can lead to bad adoption situations, and nightmare outcomes, such as the 12-year-old Russian boy who was put back on a plane by his American adoption parents, with a note in his pocket explaining they couldn't handle him.

Finally, what is not at all under control is providing predictability to suffering would-be parents and adoptive children - there have been some pretty unfortunate stories of people about to fly to meet their child (with the child having been told they would be adopted) only to have the country decide to shut down all international adoption more or less overnight. Belarus was the outstanding example of this. A milder version (but still fundamentally wrong) is where parents are being allowed to put in dossiers by adoption agencies, in situations where they are unlikely to adopt a child within a decade. This kind of false hope and changing goal posts is very distressing for would-be parents who have often already gone through a lot by the time they get to adoption.

Sounds like the adoption agency is as much an obstacle as anything! Do you have to have one?

No, it is possible to go through an individual adoption. But it's not a good plan - more stress, more risk of being involved in something dodgy. Most agencies are staffed by people who want to help and who do their best. But they can be a problem - in France, they are all overwhelmed with cases, so you have to trek around to find one that will accept you. Some give poor advice on choosing a country, or pressure parents into accepting a child that is not a good fit. But this is a minority, thankfully.

I still don't approve of international adoption - children that are abandoned should stay in the country where they come from.

In an ideal world, certainly. The Hague Convention foresees that children should be adopted within their home country where possible. However, even relatively prosperous developing countries such as South Africa or China cannot currently give a home to all their abandoned children. So it comes down to what you think is most important - for a child to have a family even if outside of their original country, or to remain in an institution in the country where they are born? Needless to say, the quality of the institution/orphanage and what happens to the child when they leave is highly relevant to this calculation.

Yes, I can see that Melbourne might be a bit more attractive than Mogadishu when you put it like that.

Ah, but let us stop you there. No one can adopt from Somalia or countries that are similarly war-torn or dysfunctional for two reasons - for one, there are no institutions to legalise the paperwork, and secondly, no one can really be sure who is eligible for adoption - an apparent orphan may have a parent who got separated from them in fighting, for example.

So the countries most in need aren't covered then?

More or less. Although there are some very poor countries with functioning adoption schemes - Madagascar for example, or Haiti. In fact most prospective adoptive parents will have a fairly small pool of countries to pick from, depending on the country in which they live, their religion, whether they have any biological children already, and whether they would accept a child with special needs. If you are a single parent or in a same sex relationship, then the pool is very small indeed, and you will need to be very patient.

Oh it depends. If applying for a special needs child in China, for example, you could be waiting for your agency to find a match. Every month, the agency looks at a big list on a restricted website, has a couple of minutes to see if anything is suitable before they all disappear, and maybe you get lucky. If not, the next month or the next month or perhaps never. Other countries, it's more of a Buggins' turn1 principle - your dossier arrives, and roughly 18 months or two years later, you are allocated a child. Or it can be completely opaque. Then there is a different type of waiting, where you have been linked with a child, perhaps even been to see them, but are waiting for the judicial and administrative procedures to finish.

Well in the meantime you can get on with something else - like an IVF or similar?

No. Most adoption agencies will ask you to do one project at a time - so if you're applying for an adoption, no fertility treatment. This to avoid tricky situations whereby an adoptive child arrives at the same time as a successful fertility treatment, and you reject the adoptive kid, or something. They won't stop you having sex though, but if you did get pregnant, you would probably have to abandon or delay your adoption dossier.

So better take up knitting then - or learning Sanskrit?

Learning a language is a good idea, especially if you are going to need to spend some time in the country you are adopting from, or you are adopting an older child with existing language skills and cultural background. Reading up on the culture that your child is coming from is certainly handy. Otherwise you can use the time to get your friends, family and colleagues used to the idea, and in developing a thick skin. You are liable to get some pointed comments from at least three angles:

In addition to that, you will face some fairly direct questioning along the way from judges, social workers, psychologists and the like. So you may as well get used to the idea of explaining your motivation with a nice smile - it is quite possible that your child will be a different skin colour from you, so you will need to get used to stares and direct (and sometimes rude) comments.

So let me get this right - this is a slow, unpredictable, bureaucratic process, where you will have to justify yourself at every turn? Why does anyone bother?

You forgot expensive. Perhaps 10,000 Euro on average, although it varies according to where you live, where your child comes from and your personal circumstances.

But as to why adopt from abroad, well most people do it because they'd really love to start a family and they have no other option. Adopting from your own country can be highly oversubscribed (if you are looking to adopt a young child without special needs - there are often plenty of older children to adopt). You might also add the possibility of giving a loving home to a child that otherwise might often be kept in an institution for much of their childhood, and then more or less released on to the streets afterwards. The procedure of applying for an adoption is only a start of course - the adoption itself is fraught with challenges, but also brings great rewards.

1Dossiers are placed on a list and treated roughly in the order they came in.