Pigs, Peas, Pone and Prosperity: A New Year's Meal in the Southern US Content from the guide to life, the universe and everything 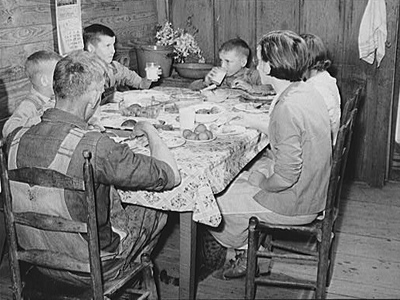 What is it we want from our New Year's celebration? Good luck for the coming year – peace, health, prosperity for ourselves and our loved ones. Whether you flip over your calendar page in spring, fall, or winter, whether you give money in a red envelope1 because red is a lucky colour, or tell your neighbours to 'have pig'2, you're trying to spread the good wishes around. Our meals, too, are calculated to encourage some of that good fortune to come our way. The main meal of the first day of the Western New Year usually comes with traditional instructions – a happy new year, for the making of.

In the mid-18th Century, the Great Wagon Road led settlers in their tens of thousands from the port of Philadelphia southward into Virginia, the Carolinas, and Georgia, and into the foothills of the mighty Appalachian mountains. These people were mainly Scots Irish and Germans. They mixed their languages and customs, and they shared their food.

Back in 1790, when the first US census was taken, there were almost four million people in the country3. 94.9% of them lived on farms. If you are a farmer, good luck means having plenty of food on hand. For every farmer who lives in a pork-eating culture, the best sign of prosperity is a pig in the barn.

Which is why Germans say, Du hast Schwein gehabt4, when they mean to congratulate you on your lottery win.

Farmers slaughter pigs in the winter, when it's cold. In late December, even farmers in the subtropics sniff the air and remark that it is 'hog-killing weather'. In Pennsylvania, the Germans celebrate the New Year with fresh pork and sauerkraut, a form of fermented cabbage that keeps well and provides a welcome shot of vitamin C in the cold, dark months. Southern farmers have their 'kraut', as well, but they also have a better growing climate than their Pennsylvania cousins. Mustard, collard, and turnip greens can still be harvested from the back garden in mid-winter. Those greens are mighty tasty – and in the modern day, the colour reminds the eater of money, also a desirable thing to have.

North Carolinians like to make up stories about their customs, though not always accurate ones. Almost every local newspaper will insist that the greens stand for 'folding money' (we know it wasn't green back in the day, but the fact-checkers are lazy), the black-eyed peas stand for 'small change', and the pork... is just good. Oh, and the cornbread is to soak up the pot liquor from the black-eyed peas.

You may safely ignore this ludicrous superstition and make the meal to honour a bunch of subsistence farmers who counted themselves lucky to have a pone of cornbread, a mess of greens, a piece of pork, and some black-eyed peas for their feast.

Health-conscious and history-unconscious people have accused rural Southerners of being addicted to fat. After all, they put it in their vegetable dishes. The reason is simple: poor people cannot afford to waste things. Pork fat provided much-needed nutrition. Fat from the less desirable parts of the pig was used to flavour vegetables, particularly collard greens, which had to be cooked a long time to break down the cellulose.

A hog jowl is the cured 'cheek' of the pig – a sort of streaky bacon.

It is not necessary to eat hog jowls as a main dish in order to 'get the luck'. Alternatively, the hog jowl (or a piece of 'fatback', a similar slice of fatty pork) can be added to your greens. You may safely indulge in a bit of ham or a chop for the main course5.

The black-eyed pea is a species of cowpea. Who knew? They come in several delicious varieties, including 'purple hull' and crowder. Shelling bushels of the things in the summer has made your fingers, well, purple, and your back tired. If you were clever and stored them in your freezer, though, now is the time to reap the reward. You didn't? Go buy some frozen ones in the supermarket, you lazy city slicker.

Pick a Mess of Greens

In the mountains, anything green that you eat raw is called 'sallet', as in 'poke sallet'. Anything green and leafy that you cook, possibly for hours, to render it edible is called 'greens', as in 'them greens is good'. The most popular greens are mustard, turnip, and collard. These greens are picked, sold, and prepared in 'messes'.

'How much is a mess of greens?' The answer is: 'How many people do you want to feed?' A mess is simply the quantity necessary for a meal.

You are now asking yourself, 'what is a pone when it's at home'? The word is allegedly Algonquin, but the short answer is that a pone is whatever form cornbread takes. This depends, of course, on the shape of your baking vessel. A round cast-iron skillet will do nicely, and is authentic.

A note on the measurements, such as they are: Southerners are backward folk. They regard the Fanny Farmer level tablespoon, introduced in 1896, as a dangerous innovation. To follow this recipe, it is not necessary to use a scale or a set of measuring tools. You don't have to convert between the Babylonian and metric systems.

Just use a soup spoon and a coffee spoon from your kitchen drawer, and a coffee cup or mug from the cabinet. As long as you use the same one, the proportions will be correct. The cup with the broken handle will do.

Will Eating This Make You Lucky?

This meal is not guaranteed to make you rich or famous. It will, however, make you full.

These delightful viands may not be fit for royalty, but they would certainly have pleased Davy Crockett, although he might have added bear meat to the menu. Bear meat is hard to get now, as bears are protected.

How about quantities, you ask? How many pounds of peas, how many bushels of greens, etc? This depends entirely on the number of guests you bring to your feast, and how hungry they are. Just use a mess.

Oh, and Happy New Year, y'all. 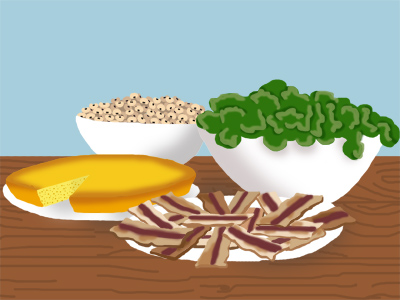 1In Asian countries, such gifts must be presented with both hands to be polite.2In the German-speaking world, and this includes the German diaspora, pigs are luck-bringing creatures. It is well to know this, as a greeting card with a cheerful hog and the words 'Guten Rutsch ins Neue Jahr!' will otherwise startle the foreign recipient.3At this time, 'the country' consisted of thirteen coastal states.4Du hast Schwein gehabt=lit, you have had pig. It means, 'You have had a stroke of good luck.'5You may safely do this unless you are a vegetarian. It is almost impossible to be a vegetarian in this food culture, and the feat is seldom attempted.6If you're health-conscious, why are you reading this?