Uxbridge Rules for Scrabble Content from the guide to life, the universe and everything 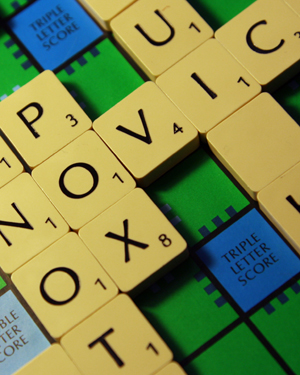 When playing Scrabble have you ever realised that you have a good vocabulary but there is someone in the group who doesn't and the whole thing is a torture for them? Many people don't want to play the game because it is too competitive and they can't think of words with Xs in. You overcome this with the Uxbridge Rules version of Scrabble. That's where these rules were invented, that is Uxbridge, Middlesex UK.

You only need the same set of equipment that you need for a standard game. Everyone chooses their tiles and who is to go first in the normal way (Everyone draws a tile and the nearest to A goes first).

Then the fun starts. Let's say Alan, Betty, Charles, and Diana are playing. Alan is lucky enough to begin. In a complete turn around of the game Alan is the only person who cannot look at his letters. He turns his rack of letters round for everyone else to see and sits back while they do all the work. As a group they try and come up with the best word they can find from the letters available. The word is played on the board and everyone except for Alan scores the points.

So imagine the first word laid is worth 15 points doubled. Betty, Charles and Diana have 30 points under their name and Alan has zero. Now play passes to the left as usual and Betty waits to see what the others can do with her letters. Again everyone apart from Betty scores.

Charles has to go to the kitchen to baste the salad. The pace of the game does not slacken as the other three ponder the options with his letters and slap down a decent word in his absence.

Diana is a real brain-box, swallowed a dictionary, type of person. While she is playing everyone will score lots of points with her, but now when they get to work on her letters they don't have the benefit of her skill and score more lowly in this round. Even though Diana scores a zero the others don't get such a high score as when she participates. This means that she has a good chance of winning the game, but it is not guaranteed.

To be frank (no not another player) Charles is useless at spelling but he never has to worry, as the other players won't allow a misspelled word go down. They would miss out on valuable points if the non-player correctly challenges a word they put down. The non-player can only challenge if they are present and comment before the next player's letters go down. Normal penalty rules apply.

As Charles is never playing alone he can forget his spelling shortcomings (even a five years old could join in). The letters on Alan's next rack are EIHSSTT. Charles suggests IT, IS or THE but accepts Betty's suggestion of THESIS and then brainy Diana informs everyone that THEISTS will score lots more points as it is a Bingo (scoring 50 bonus points). Charles gets a good score and increases his vocabulary in the process, too.

It lends itself to people disappearing for a bit without the game grinding to a halt. Wonderful if someone goes to check on the Christmas roast or whatever. The others just carry on.

So who would want to play this way?