What to Do when You Fail to Survive Death Content from the guide to life, the universe and everything 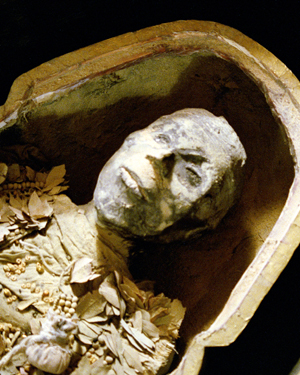 Some day, you will cease to live. Afterwards, you will have much time for relaxing and lying around all day. If that is too boring for you, read this Entry about all those exciting activities you can pursue after your death.

If you think yourself to be too fat, too ugly, too hideous or whatever else, your problems will melt away at the end of your life, provided you can afford to... become a diamond! Several companies all over the world offer this service. First, your body will be cremated in the usual way, then all carbon will be extracted from your ashes. Finally, a synthetic diamond created from the remains will be sent to your heirs. Note that the process is much more expensive than the resulting diamond would be worth - corpses are not a route to tremendous amounts of money. Also bear in mind that only a small part of the diamond is made from your own carbon, due to the cremation not only of you but also of your coffin. Furthermore, the extraction technique is not completely perfect. Your body's carbon may not be separated from impurities, which can cause slight colour variations. But this works also the other way round: you will be able to order specific colours.

Corpses would be in short supply, if there were no voluntary donors. If you like to support the education of physicians, bequeath your body to a medical faculty.

The more thrilling alternative is to give it to a body farm.

All currently existing body farms are located in the USA, the most famous being that of the Forensic Anthropology Center of the University of Tennessee. If you decide to give your body to those researchers, they will place it outside under specific conditions and study it permanently. Twice an hour a photo will be taken, and entomologists1 will examine the new inhabitants of your body. The facility's purposes are both the training of FBI special agents and research into human decomposition. Therefore the donors' remains are placed in a variety of different scenarios, which might involve bodies being placed underwater, buried or put in a trunk. If you do not like the thought of being treated like that or have specific wishes, such as remaining fully clothed, they will be considered. Once a year, a 'Cleanup Party' takes place: skeletonised corpses are collected and added to the William M Bass Donated Skeletal Collection.

If you suffered from any sort of contagious diseases, you may still be admitted to the Donated Skeletal Collection, but only after cremation. Of course, watching ashes degrade further is rather pointless, but the trick is not to pulverise the bones, for which a specific request will be needed to be given to the crematorium.

Organ Donation is another useful afterlife activity. You will even be able to donate the organs of your choice and to send the rest to a body farm afterwards.

The three other body farms are less known due to the above one's overwhelming media presence. They work pretty much in the same way, with a few specialities. If you are fond of animals, your favourite may be the Western Carolina University, whose body farm also serves for detection dog schooling. Another one was set up at the Texas State University, although residents were concerned about circling vultures. The most modern farm is hosted by the Sam Houston State University.

Many people do not like the idea of decaying until neither memory nor material evidence of their existence is left. If you want to survive for millions of years, there is a way of extending your physical existence: become a fossil.

Unfortunately, humans and many other vertebrates do not match most prerequisites for petrifaction. We neither have an exoskeleton2 nor do we live underwater. Of course you could make preparations to deposit yourself in the ocean, but the deeper you come to lie, the better you will be preserved. Therefore, your chances of being found by future archaeologists tend to zero. Please, stay on land.

Bid farewell to your soft tissues. They won't even survive the first century. Petrifaction requires a little preparation during your lifetime. Focus on calcium diet and much sunlight. This will render your skeleton and teeth more durable. Upon approaching your death, choose a good resting place. Caves, for example, are dry and cool, thus adequate. If you prefer a less boring death, try to get buried in anoxic mud3. Flood areas of irregular rivers or wadis4 during the rainy season make a proper grave.

Neither drowning nor suffocating is the nicest death. If you want a really speedy end, seek out an active volcano. But this method has a catch too: you do not want to be overrun by hot lava but instead buried in ashes. Most eruptions that provide ashes usually begin with a devastating explosion, so do not go too near the crater.

...or at least Centuries

If you do not want to wait 200,000 years for discovery, try mummification instead. In the case of mummies, the process of putrefaction is only interrupted but not stopped. That means less durability, but since you are not buried under tons of rock, you will also be found earlier.

In former times, this was the preferred method of preservation for the elite few. The Egyptian method is the best-known, but requires helpers and profound knowledge of the topic. These days, there are only a few who know about the appropriate techniques. Another ancient way of mummification needs nothing but you and your steely will: Sokushinbutsu. Do not try. It is rarely successful, and if you fail, you won't make it into Nirvana5.

Falling into a glacier is a well-proven technique, but global warming may spoil your plans.

The best way into eternity is a single step, preferably in a bog. Your bones as well as your complexion will be lost due to the acidic surroundings, but your soft parts will be perfectly conserved. Note that this method is also not completely foolproof. In former times, bog bodies were discovered by turf cutters; nowadays turf is mined by machines. It is believed that many bog men have already vanished forever in the bowels of mechanical monsters, which makes mummification on purpose somewhat pointless.

We're all familiar with the crashtest dummy, used for testing a car's behaviour in a crash. A common problem of such tests is that most dummies lack realistic organs, so that not every impact effect can be recorded. Because of that, real corpses are also used in car testing – another way to save lives after you cease to be! It's not only car companies but also NASA that test their vehicles, if you cannot afford a normal space funeral.

Where no Man Has Gone before

Space funerals have grown very popular in recent years. Currently, only the company Celestis offers these6. Depending on your wishes, either 1 or 7 grams of ashes are launched, or double that amount if it consists of two individuals. Prices range from $695 to $12,500 for the 1-gram option – $695 for one single flight with return to Earth and $12,500 for the Voyager Service that shoots you into deep space. If you fear homesickness, you can stay in Earth orbit, but note that your capsule will leave its path in a few decades, or, if you are lucky, centuries. The cheapest stable destination is the Moon.

A rather unusual method of leaving the stage is alkaline hydrolysis, which is offered only in Minnesota and New Hampshire so far. The corpse is placed in a metal tank filled with lye. The container is securely closed and then put under high pressure and temperature. Three hours later you will have dissolved into a greasy, greenish-brown liquid that smells like ammonia, consisting mostly of peptides, amino acids, sugars and salts. This costs no more than a normal cremation. Your remains will be given to your relatives, who may either fertilise the garden or spill it into the sewer. Alkaline hydrolysis produces almost no carbon dioxide, so your choice will therefore benefit those others who have opted to be buried in a glacier.

1Entomology is the science of insects.2A hard outer shell.3Mud with a very low content of dissolved oxygen.4A wadi is a dry, rarely flooded river valley in Arabia.5Not to mention the incredible pains lasting over six or seven years.6There are some other ones, who will shoot your ashes once only out of the atmosphere before they return to Earth - this requires only sounding rockets, which are very cheap compared to space rockets. As you may have guessed, Celestis' full service is more expensive.