The Barn Owl in the UK Content from the guide to life, the universe and everything 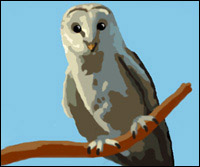 The barn owl is a very distinctive bird. It has beautiful pale brown plumage with very light underparts, but most people will only see it appearing as a ghostly white shape in the light from their car headlights. The barn owl is widespread around the world, found on all continents except Antarctica. It is estimated that there are something like 4000 pairs alive in the UK.

Considered wise in British folklore, (how many children's stories feature a Wise Old Owl?), the barn owl is not thought by falconers to be especially bright and it happens to appear next to the cuckoo in most bird books!.

The owl needs to be undetected as it hunts so it has specially adapted feathers on the leading edge of the wings which make the bird almost silent during flight.

It usually hunts after dusk and likes to catch rodents (especially voles) and some small birds. It crushes them dead in its talons and usually flies off carrying the unfortunate prey in its feet.

The bird is also capable of hunting in pitch darkness, relying on its superb hearing instead of vision. Like a satellite dish collecting radio waves, the feathers around the owl's heart-shaped facial disc gather sound and channel it towards its super sensitive ears.

The eyes are fixed in their sockets, so the owl has a flexible neck which is able to turn through three quarters of a circle (not all the way around as you sometimes see on cartoons).

The barn owl often makes its home in buildings like old barns, church towers or derelict farm buildings but does not actually construct much of a nest. It prefers to just make use of a handy ledge. Tree hollows and cliff ledges are also used. The female will lay four to seven eggs, and there may be two broods per year if food is plentiful.

The young have a fledgling period of over seven weeks which is quite a long time in the bird world. Probably fewer than half of the young owls will survive their first year and most of the survivors will live for only two or three years, a shorter lifespan than most other raptors.

Because it is known to make a loud screeching noise, the barn owl is sometimes referred to as 'the screech owl'.

The Barn Owl Centre is a very good website about barn owls.