Group Captain Sir Douglas Bader, DSO DFC Content from the guide to life, the universe and everything 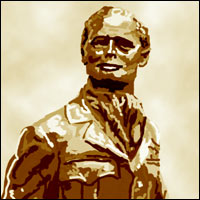 Sir Douglas Bader, a World War II hero, was injured in a plane crash before the war even started - yet he still was able to distinguish himself in the RAF during the war and became famous enough to have a pub named after him.

Douglas Robert Steuart Bader was born in London in 1910. Just after his birth, both his parents left for India and did not return to England until 1913, when Douglas was three years old. Just a year later, his father, Frederick, was sent to France to fight in the Great War. Unfortunately, Douglas's father died in 1922 due to complications from a shrapnel wound. His mother later remarried. The family moved to the little village of Sprotborough, Doncaster, in South Yorkshire where her new husband, the Reverend Ernest William Hobbs, lived.

While at school, Douglas built up a love of sports. He had a particular flair for rugby and became the school team's captain.

When Douglas left school, he decided that he wanted to join the RAF and had gained his cadetship by 1928. At the beginning of his training for the RAF, it quickly became apparent to his commanding officers that he did not like following orders. This was confirmed when Douglas took his mid-training progress exam and finished very near to last. Because Douglas had exceptional flight skills, though, he was given a second chance. He came through with flying colours and narrowly missed out on receiving the Sword of Honour, which was awarded to the best graduate of the year.

After graduation, Douglas was posted to No 23 Squadron at Kenley. At this time, Gloster Gamecock biplane fighters were being used by the RAF. However, not long after, Kenley was re-equipped with Bristol Bulldog fighters. These were heavier and faster than the Gamecocks. Douglas was inexperienced at flying the Bulldog fighters.

On 14 December, 1931, when Douglas was 21 years old, he was goaded into performing some aerobatics in his Bulldog. He began a slow roll. Then he flew too low and as a result the wing of his plane struck the ground, causing the plane to cartwheel and crash. Douglas's legs were crushed. Douglas was pulled from the wreckage and rushed to hospital. Both of his legs were amputated.

After a painful recovery, Douglas was retired from the RAF. He then took a desk job with the Asiatic Petroleum company1 and, in 1935, married Thelma Edwards.

Douglas still had a yearning to fly. When World War II broke out in 1939, he reapplied to the RAF for flight duties. He attended a selection board meeting which determined that Douglas's flying abilities would have to be assessed. This was done at the RAF's Central Flying School in Upavon, on 27 November, 1939, eight years after the accident. Douglas proved that he could still fly. In February 1940, Douglas joined No 19 Squadron at Duxford.

Douglas was given command of No 242 Squadron in June 1940. This was the only Canadian unit in the RAF at that time. On 30 August, the squadron encountered a group of 30 German bombers. The squadron claimed 11 kills. Even though this was a respectable total, Douglas was not happy. He was of the belief that, had there been three or more squadrons attacking the German formation, all the planes would have been shot down. Because of this conviction, the 'big wing' concept2 was born. With this in mind, five squadrons were joined together and they became known as the Duxford Wing. The Duxford Wing had many successes fighting as one unit, especially on 15 September, 1940, when they helped to break up a massive Luftwaffe attack on London. The Duxford Wing was credited with destroying a total of 152 German aircraft. After the Battle of Britain, Douglas was awarded the Distinguished Flying Cross (DFC) and Distinguished Service Order (DSO) for gallantry and leadership of the highest order.

Douglas seemed to be invincible, but this was not the case. On 9 August, 1941, his plane collided with a Messerschmitt Me-109 and he was captured by the Germans. He spent most of the war in prison. Douglas was even transferred to Colditz due to his many escape attempts. During the spring of 1945, Colditz was liberated by the American First Army. Although Douglas did spend most of the war in prison, he had still managed to destroy 22.5 German aircraft.

Douglas left the RAF in February 1946. He then spent his time travelling and visiting veterans' hospitals. He was knighted by Queen Elizabeth in 1976 for his services to amputees.

On 5 September, 1982, Douglas Bader died of a heart attack. Douglas's artificial legs are on display at the RAF Museum at Stafford, although this is not a museum that is open to the public. Reach for the Sky, a biography of Douglas, was written after the war by Paul Brickhill. A film of the same name was made, starring Kenneth More. There is also a pub named after Douglas in Martlesham Heath, Suffolk.

1Now known as Shell.2Entailing the practice of having multiple squadrons fly together.