The Merchant Adventurer's Guild Hall, York, UK Content from the guide to life, the universe and everything 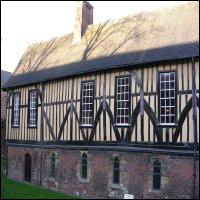 History of the Guild

The organisation originated as a fraternity and guild in honour of Jesus and the Virgin Mary. The site was granted to them in 1356 and the building of the Hall took four years. Some of the group's members were mercers1 and King Henry VI gave them a charter to form a commercial guild alongside the religious fraternity. In 1581, a royal charter proclaimed the guild the Company of Merchant Adventurers. This charter also gave them the right of monopoly over virtually all goods, meaning that anyone wanting to trade on a reasonable scale had to be a member. The Company traded a wide variety of items, including exports such as wool and cloth and imports such as salt and wine, with much of Western Europe.

However, in 1827, the Company lost a legal case challenging this monopoly and it was overturned. By this time, the importance of the Company was fading as York was no longer such an important trading centre due its rivers beginning to silt up. This made trade by ship more difficult.

The three main rooms of the Hall are still intact. It is a Grade I listed building2 and a Scheduled Ancient Monument3. It can even be hired for private functions.

This huge room takes up most of the first floor. It is so wide that the roof, built of massive oak beams, had to be built in two sections. The current windows are Georgian and larger than the originals, meaning that the building would have been darker in the Middle Ages than it is today. Similarly, some of the wood panelling is Tudor and the fireplace was added in the 16th Century — earlier, the room would have been heated by charcoal braziers. The wall panels were decorated with roses, but these do not show up today except in one spot near the doorway. The Committee Room was inserted in the 18th Century. At this time the Company was in decline and the committee felt silly having their small meetings in the cavernous surrounds of the Great Hall. The Great Hall was used for feasts and meetings of the Guild.

These are Elizabethan additions built in about 1600, shortly after the Company was granted its monopoly. They were built as cottages but were originally used as display areas for the merchants' goods before being used as houses for the caretakers of the Hall. They lead into the Governor's Parlour, an addition from the mid-20th Century.

The Undercroft is another large room directly below the Great Hall. It was originally used as a charity room and hospital. It was built to house thirteen ill or poor people, but probably contained more much of the time. In fact, the room was used for this purpose until about 1900.

The walls of the Undercroft are brick, which is the first known use of brick in York since the Romans left Britain in 410AD. The floor was raised several hundred years ago because it was prone to flooding from the River Foss at the end of the Hall's garden.

At the far end of the Undercroft is the Chapel. It was built in 1411, but there may have previously been a chapel onsite. It was originally somewhat grander than it appears today — for example, it has numerous statues and three altars, but these were removed as a result of the English Reformation4. The current chapel, including the pews, dates from 1611.

The Company still exists today; it was involved in the foundation of the University of York and operates as a charitable organisation and commercial pressure group.

1Traders who deal in cloth.2Listed buildings are considered to be of special architectural or historic interest and as a result require special protection.3Scheduled Ancient Monuments are nationally important archaeological sites which are protected by law.4This was the time in the fifteenth and sixteenth centuries where England, concurrently with some of the rest of Europe, switched from Catholicism to Protestantism. As a result, typically Catholic items of worship, such as statues, were removed from churches.