The Haunting of Bikini Atoll Content from the guide to life, the universe and everything

MEN OTEMJEJ REJ ILO BEIN ANIJ. (Everything is in the hands of God)
– Motto on the flag of Bikini Atoll 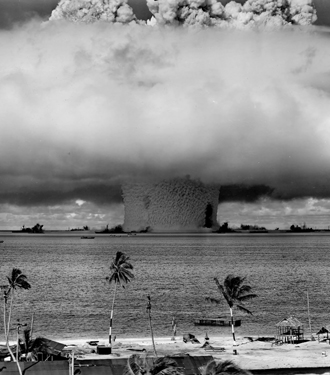 The flag of Bikini Atoll, a Marshall Island group in the Pacific Ocean, looks a lot like the US flag – red stripes with a blue field in the corner. The blue field contains 23 stars, representing the islands of the atoll. Three black stars on a white stripe signify the islands damaged by a 15-megaton nuclear blast in 1954. Two lower-placed black stars stand for Kili and Ejit Islands, the new homes of the displaced islanders. The slogan, 'Everything is in the hands of God', is what their leader, Juda, said when told by a US Navy commodore that the islanders would have to give up their home 'for the good of all mankind'. This was how the US Navy characterised relocating 167 people in order to use Bikini's lagoon for nuclear testing.

Bikini Atoll is now a UNESCO World Heritage site. The island of Bikini can be safely visited, if you bring your own food and water. Bikini people have been paid money by the US government for turning the coconuts of Coconut Island (ni means 'coconut' in Marshallese) into radioactive hazards. But spectres haunt the site still – phantoms of loss, suffering, horror, and fear for the safety of the mother planet are most noticeable, but peeking out between the palm fronds we might also see the ghost of the Cold War and the ugly little gremlin of disdain for the fate of others. Bikini, the island paradise that isn't, has something to teach the rest of Planet Earth.

In 1946, only the US had atomic technology. The rest of the world was aware of this, as only the US had ever tested an atomic bomb (in 1945, at Alamagordo, New Mexico), or used one as a weapon (two, actually, both in Japan). Leaders such as President Harry S Truman were proud of US accomplishments in the WMD1 arena, and determined to stay ahead of the curve. To this end, they wanted a testing area in the Pacific.

In 1946, there was Operation Crossroads. To the minds of US naval leaders, there was an excellent reason for setting off the world's fourth and fifth atomic explosions and causing what chemist Glenn Seaborg called 'the world's first nuclear disaster'. That reason was appropriations. Fearing that the advent of the nuclear age would cause battleships to be considered obsolete, the Navy was eager to prove that warships could stand up to the nuclear threat. Accordingly, the Bikini Islanders were moved, and ships – everything from mothballed submarines and aircraft carriers to captured German and Japanese vessels – were set up in the lagoon, populated with sacrificial pigs, goats, and rats, and Able and Baker bombs were dropped, one in the air, one in the water..

The third test bomb, Charlie, was cancelled. They couldn't decontaminate the target ships. But since the ships were still intact, the Navy reckoned that it had won the fight.

Able and Baker had other names. The two bombs were copies of the one dropped on Nagasaki in 1945. The plutonium core used was known to scientists as the Demon Core because two of them had been killed by radiation during criticality tests.

Able, the first of the two bombs with a demon core, was also called Gilda. Gilda was a popular movie that year, starring the seductive 'bombshell', Rita Hayworth, whose picture was on the bomb. Not to be outdone, Baker sported the name 'Helen of Bikini'. Atomic bombs – deadly, seductive femmes fatales.

The same year, automotive engineer Louis Réard unveiled his new two-piece swimsuit, which he called the bikini. It had two things in common with atomic weaponry – it split something in two, and it caused a shockwave.

No one asked the Bikini Islanders what they thought of these new developments. The Navy spokesmen merely compared their odyssey to that of the Israelites entering the Promised Land. The islanders, who felt that Rongerik Atoll was inferior to their previous home, being not only without adequate food and water, but also inhabited by evil spirits, were not convinced. The people of Bikini starved, became ill from eating radioactive fish, and tried unsuccessfully to communicate their needs to the ri-bellis2.

The Spectre of Godzilla

In 1952, the US tested the first hydrogen bomb – more powerful than the previous bombs, but, as the explosion was ground-based, not an impressive weapon. In 1953, the USSR dropped a hydrogen bomb from an airplane. This was unacceptable. The US needed to win the nuclear arms race. And so, in 1954, a 15-megaton bomb was dropped over Bikini Atoll and detonated at 15,000 feet. The resulting explosion was brighter than 500 suns.

The Castle Bravo bomb was the largest nuclear device ever tested by the US, but this was by accident. The yield was two and a half times what had been expected – and the wind was blowing the wrong way. Observers had to flee their bunker, and soldiers, sailors, islanders and fishermen found themselves inside the deadly fallout zone. All of Bikini Atoll was contaminated. Aboard the Japanese vessel Daigo Fukuryu Maru, or Lucky Dragon Five, 160km from the test site, fishermen were scooping up radioactive coral with their bare hands as it fell on their boat. All became ill and one of them died, saying, 'I pray that I am the last victim of an atomic or hydrogen bomb'.

In Japan, there was outrage. A film, Gojira (Godzilla), made that year, depicted an attack on Tokyo by a sea monster awakened through US nuclear testing. Only Japanese technological know-how was able to defeat the spectre of American nuclear power.

The Spectre of Environmental Disaster

In the 1970s, Bikinian families returned to Bikini. Scientists believed that the the place was safe again. But the coconut crabs were too radioactive to eat, the water was questionable, there were miscarriages and birth defects... people moved out again. Lawsuits to recover damages have still not been completely worked out. The people of Bikini live scattered throughout the Marshall Islands, unable to return to their homes. Today, divers explore the underwater graveyard, visiting the remains of the USS Saratoga and Admiral Yamamoto's flagship, the Nagato, and other relics of the last world war. Brightly-coloured fish live in the water – more of them now, because nobody wants to catch and eat them.

When spectres haunt a house, the inhabitants may call an exorcist, but who can exorcise the demons of Bikini? When radiation is detected, experts usually recommend scraping about ten inches off the topsoil. This solution makes a desert, but it could be called peace. Until this drastic solution is implemented, Bikini's coconut trees still sway in the wind – even if it's not a good idea to eat their fruit. In a world where even paradise is not sacred, where the innocent cannot pursue their lives in peace, perhaps the haunting of Bikini Atoll can serve as a warning to the rest of the planet: It isn't the noise of the blast you make that will be remembered, it's the size of the hole you leave behind.

1WMD=Weapons of Mass Destruction.2The Marshallese word for 'Americans' or 'foreigners' means 'people who cover', referring to the missionaries' habit of demanding that people wear unnecessary clothing.