Oedipus - a Complex Character Content from the guide to life, the universe and everything 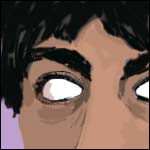 The story of Oedipus was used over and over again in Greek tragic plays - Greek tragic playwrights, like many later writers, based large numbers of their plays on Greek mythology. Most classical drama has been lost or destroyed, and consequently we are left with only one version of the Oedipus story - the three plays written by Sophocles:

The Story of Oedipus

The story begins when Laius, the king of Thebes, is told by an oracle that he will one day be killed by his own son, at that time just a baby. After consulting his wife, Jocasta, Laius decides that the baby should have its feet bound together and be left on Mount Cithaeron to die. The slave, a shepherd, who is given this task takes pity on the baby and hands him over to a fellow shepherd from neighbouring Corinth. The shepherd in turn presents the baby to the King of Corinth - Polybus - who has no children of his own. The baby is given the name Oedipus, which means 'swollen foot', because of the lasting effects of his feet being bound.

Years later, Oedipus has grown up and, as teenagers often do, gets into a fight at a party. He is accused of being illegitimate and so, to find out the truth, he consults an oracle. Instead of giving a straight answer to the question, the oracle foretells that Oedipus will kill his father and marry his mother. Not surprisingly, Oedipus is horrified by this and he resolves to leave Corinth immediately to get away from the people he believes are his parents. Unfortunately, he heads towards Thebes, home of his natural parents.

On the way to Thebes, two important things happen to Oedipus. Firstly, at a place where three roads meet, he meets an old man driving a cart. The man is particularly rude to Oedipus and insists that he get out of the way. When Oedipus refuses, there is a fight and the old man is killed, along with his retinue of slaves.

Secondly, Oedipus meets the Sphinx - a creature with the body of a lion, wings, and the head of a woman - which was terrorizing Thebes. Travellers were asked a riddle and, if they could not answer, they were killed by the Sphinx. Sophocles never specified what the riddle was - later writers had to fill in the gap, and at least two variants of the riddle exist, although the answer is the same in each case:

Which animal has one voice, but two, three or four feet, being slowest on three?

Which animal goes upon four legs at dawn, two legs at noon, and three legs in the evening?2

Of course, Oedipus correctly answers the riddle, causing the Sphinx to commit suicide. In doing so, he fulfils an ancient prophecy stating that whoever rids Thebes of the Sphinx is worthy to be the King. As the former King, Laius, had mysteriously disappeared, presumed dead, Oedipus is immediately pronounced King of Thebes, and is also allowed to marry the King's widow - Jocasta. So, the first part of the prediction has come true - Oedipus has married his mother, although he doesn't know it yet.

Over the years, Oedipus and Jocasta live happily together and have four children - two daughters (Antigone and Ismene) and two sons (Polynices and Eteocles). Unfortunately, a great plague has developed in Thebes and cattle, crops and children are dying. The cause of the plague is obviously some great sin committed by an inhabitant of Thebes, and so Oedipus sends Jocasta's brother Creon to consult the Oracle at Delphi. The Oracle informs Creon that ex-King Laius is indeed dead and that the plague has come about because his murderer remains unpunished. Oedipus places a curse on Laius' muderer and consults Teiresias, a blind prophet, for more information. Teiresias states that Oedipus himself is the killer, a revelation at which Oedipus is understandably quite upset. He accuses Teiresias and Creon of conspiring to steal his throne, and would have executed Creon had Jocasta not intervened. Teiresias, meanwhile, leaves Thebes, issuing threats and warning Oedipus about worse crimes that he may unknowingly have committed.

Having prevented the execution of her brother, Jocasta asks Oedipus what all the fuss is about. When Oedipus tells her what the oracle said, Jocasta explains that she doesn't believe in oracles, as it was once predicted that Laius would be killed by his own son, when in fact the son was left to die as a baby and Laius was killed by 'robbers' at a place where three roads meet...

Before Oedipus can get at the truth, a messenger arrives to tell him that his adopted father, Polybus, has died, leaving Oedipus as King of Corinth. Remembering the oracle that said he would marry his mother, Oedipus refuses to return to Corinth as his 'mother' is still alive. At this point, the messenger tells him the story of his adoption. Jocasta, realising that Oedipus is the baby that was left to die, and therefore her son, hangs herself.

The full story is revealed when the old shepherd is sent for and threatened with torture unless he tells the truth. He confirms to Oedipus that he was adopted and that Jocasta is his mother, and also that the man he killed at the place where three roads meet was Laius, his father. Oedipus dashes off to find Jocasta, but finds only her dead body. In remorse, he removes two pins from her dress and blinds himself. In his place, Creon becomes King of Thebes and orders that Oedipus say goodbye to his daughters and be left to the mercy of the gods.

At the beginning of this instalment, Oedipus is thrown out of Thebes and is forced to wander the land looking for somewhere to die, as no country wants to be defiled by the body of one so cursed. Oedipus' only companion is his daughter, Antigone, who acts as his guide, Oedipus having blinded himself at the end of Oedipus Tyrannos.

Oedipus is informed by an oracle that he will die and be buried at a place called Colonus, part of Athenian territory. When he attempts to settle there, the populace try to get rid of him but, after an appeal to Theseus, King of Athens, Oedipus is allowed to stay. Theseus believes that the place of Oedipus' death will be somehow honoured by the gods, and that his spirit will protect Athens.

While waiting to die, Oedipus' second daughter, Ismene, arrives with the news that his sons are quarreling over who is the rightful King of Thebes. Polynices arrives at Colonus and asks for Oedipus' blessing, but Oedipus refuses, shocked at his sons' behaviour. He predicts that they will eventually kill each other and, having uttered this curse, dies during a thunderstorm.

After the death of their father, Antigone and Ismene return to Thebes, where Oedipus' second son, Eteocles, is the sole ruler, watched over by his uncle Creon. Polynices, meanwhile, has befriended King Adrastus of Argos, who has promised his support in bringing Polynices to the throne of Thebes. Seven armies from Argos attack the seven gates of Thebes, but the siege cannot be broken. Eventually, it is decided that seven champions should be selected from each side and that they should fight to the death. The defending Thebans are victorious, but not without cost. It emerges that Eteocles and Polynices were two of the chosen champions and have killed each other, as predicted by their father. This leaves Creon as the ruler of Thebes.

At the begining of Antigone, Jocasta's brother, Creon, has assumed the throne of Thebes. In order to assert his power, he has made a decree that the body of Eteocles, his former ally, should be given a hero's burial, and that Polynices should not be buried at all - anyone attempting this would be stoned to death.

Ancient Greek custom held that dead bodies must be buried with proper rites or the dead person's soul will not enter the underworld. It was each living person's solemn duty to give burial to any dead bodies that happened to cross their personal spheres of existence.

Antigone knows this law and she decides to bury her brother. She evades the guard set on the body and does so, but the body is uncovered again. She buries him a second time and is caught. Creon decides to have her killed, ignoring the will of the gods, of his council, of the people of Thebes and of his son, Haemon, to whom Antigone is engaged. Antigone is sealed in a cave, Creon rationalising that her blood won't actually be on his hands. Finally, Teiresias convinces him that he is wrong, and Creon races to the cave to release Antigone, but she has already taken her own life. Haemon finds her body and attacks Creon, before eventually killing himself. At the news of her son's death, Creon's wife Eurydice also kills herself, leaving Creon alone to face what he has done.

The idea of an 'Oedipus complex' was first developed by Sigmund Freud. The idea became the cornerstone of his theories of psychoanalysis and he considered it to be an important part of all human relationships.

Freud suggested that all boys in the 'phallic' stage of development (roughly between two and five years of age) develop a sexual attraction towards their mother, with corresponding hostility towards their father. The complex is resolved when the boy starts to identify with his father and the sexual interest in his mother disappears. In Freud's view, failure to overcome the urges of the Oedipus complex leads to neuroses in later life. Although Freud's original theory appeared to concern boys, later interpretations included girls as well, the female equivalent becoming known as the 'Electra complex' - in Greek myth, Electra plotted to kill her mother, Clytemnestra, who murdered Electra's father, Agamemnon.

Today, many psychologists agree that Oedipal relationships are important in the development of personality, but suggest that the attraction to one parent and hostility to the other are more likely to be a reaction to parental authority rather than to sexual desire and jealousy.

The term 'Oedipus complex' has also entered into everyday language3 and is often used to describe a man who has a close relationship with his (possibly strict) mother, often to the detriment of his relationships with other women.

1Despite its modern connotations, 'Tyrannos' does not mean a cruel tyrant, but refers to a ruler who is chosen by the people rather than inheriting a title. Later versions of the play, such as that by the Roman dramatist Seneca, are often known as Oedipus Rex ('Oedipus the King').2The answer to the riddle of the Sphinx is, of course, 'Man'. 'Four feet' is crawling like a baby ('at dawn'). Three feet is walking with a stick, as an old man would ('in the evening').3Although the term 'complex' is often used casually, Freud used it in a very specific way to mean 'a related group of repressed or partly-repressed emotionally significant ideas which cause psychic conflict leading to abnormal mental states or behaviour.'