The Nerja Caves, Andalucia, Spain Content from the guide to life, the universe and everything 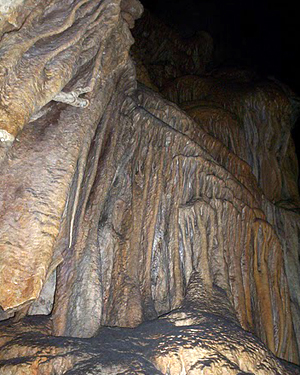 In the province of Málaga, Andalucía1, southern Spain, a coastal town called Nerja boasts one of the world's most incredible natural wonders – the Cueva de Nerja (Nerja Caves). Their formation began approximately five million years ago with the action of flowing and circulating water with the result that an underground cavern was created with stalactites and stalagmites for decoration.

The caves were inhabited by prehistoric man from around 20000 BC until about 1800 BC. There is evidence that some parts of the complex were used as burial chambers2. Following its accidental discovery by bat-hunting children in 1959, measures have been taken to facilitate visitors, bringing much-welcomed tourism to the area.

The Nerja Caves are divided into two sections: Nerja I and Nerja II. Only Nerja I is open to the public. Nerja II is off-limits due to the on-going excavations and priceless relics still being discovered. There are two natural entrances to the entire 5km complex, plus one created in 1960 for visitors to access Nerja I. Artifacts on display are stone and bone tools, pottery and fishing items, and one of the former occupants. Excavations at the site uncovered animal and fish bones, snail shells, nuts and seashells. There are cave paintings on some walls but those caves are not accessible to the public due to the risk of damage by contamination. However, postcards displaying the cave art are available from the gift shop.

The Sala de la Cascada (Hall of the Waterfall) has a 60m ceiling, and nearly ideal acoustics. A seating area has been built for audiences to enjoy the unique ambience. The International Festival of Music and Dance is held annually in the Hall of the Waterfall during the summer months, offering a variety of entertainment. Previous productions include the Bolshoi Ballet and a rock concert. Many orchestral performers have also delighted the audience with their renditions, although the atmosphere in the caves makes keeping instruments in tune an ongoing task for the musicians. One of the most celebrated appearances was that of violin legend Yehudi Menuhin (1916-99). Such wondrous music resonating around the geological wonder must have been compelling indeed. Exalted opera singers who have graced this stunningly beautiful subterranean auditorium in the past are Dame Kiri te Kanawa and the home-grown Montserrat Caballé (soprano) and Alfredo Kraus (tenor).

Some distinguished artists who appeared at the 50th annual festival in 2009 were Spanish tenor José Carreras, Spanish soprano Ofelia Sala, the Italian pianist Lorenzo Bavaj, soloists from the Paris Ballet, and the brother and sister flamenco act, singer Miguel Poveda and dancer Sonia Poveda. VIP guests include Queen Sofía of Spain who attended a concert given by Russian conductor and cellist Mstislav Rostropovich3 in 1991.

The 2010 festival attracted a total audience of over 3,000 people. Show highlights included the Prague National Ballet Theatre plus a full symphony orchestra. The whole event was recorded by Spanish television with a view to airing it at a later date in the hope of garnering more visitors to the caves.

This festival is now 'a must' cultural summer event on the Costa del Sol and the aim is one of great impetus to the cultural activity of music, both nationally and internationally.
– Angel Ramires, Nerja Cave Foundation Manager 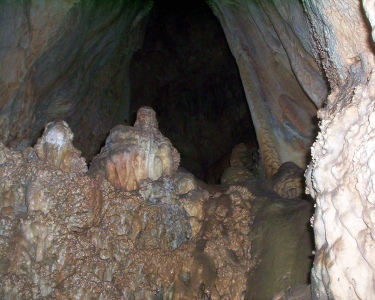 The Sala de los Fantasmas (Hall of the Phantoms) is so-named due to the spooky appearance of some of the formations. One such structure earns a double-take as it looks just like the top half of a Crusader knight, complete with chest cross and attending squires. Columns of calcite form figures and one set looks uncannily like a Nativity scene.

There is a large rockfall between this cavern and the Sala del Cataclismo (Hall of the Cataclysm) which contains the largest formation of its kind in the world – a 32m-tall column. Some of the wall features are back-lit with coloured lightbulbs, producing very interesting visual effects. Other front illumination casts light upon strange-shaped objects resulting in projected shadows which stir the imagination.

Rincón del Órgano (Organ Corner) is abundant with natural fluted columns. They can be struck to create varied sounds, and there are some columns which have been manually adjusted to produce different notes. It's quite possible that these are the world's oldest musical instruments.

The Nerja Caves are a must-see for anyone visiting the Costa del Sol. With their jaw-dropping natural historical features such as the 32m stalagmite joined to a stalactite and the surreal rock sculptures, the Nerja Caves are fully deserving of their status of Monumento Histórico-Artístico (Spanish Heritage Monument). There is a direct bus route from the city of Málaga to Nerja (some 50km). The caves lie just 4km east of Nerja, near the village of Maro, and just 90 minutes' drive from Granada and the Alhambra. There is ample parking space and a safe play area for children. There is also a visitor centre, a restaurant with bar, gift shop and gardens to enjoy. A fabulous statue of the climbing boys commemorating the discovery of the caves is just outside the entrance. Admission cost €7 per adult in 2010.

Access to the caves is via a flight of stairs, and there are multiple steps to climb and bridges to cross inside. Therefore the caves are considered unsuitable for people who have mobility issues. Be aware that there are no provisions for wheelchair users or baby prams/buggies inside the caves. Concrete paths have been laid for ease of access to various areas and there are ample handgrips, railings and banisters for support when climbing. Cave employees are easily identifiable by their distinctive T-shirts, should you require assistance once inside the facility. To give you an idea of what to expect there is a 360° panoramic view in High Resolution of one of the caverns.

1An alternative spelling is Andalusia.2One of the last inhabitants was so well preserved that his complete skeleton is now on display in a glass case.3His impromptu performance of a Bach cello suite as the Berlin Wall was being demolished in November 1989 was seen by millions around the world.