Kyoto, Japan Content from the guide to life, the universe and everything 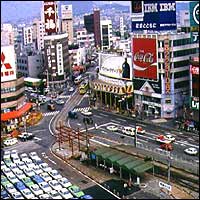 The city of Kyoto is considered by many to be the cultural heart of Japan. While it is not the oldest capital city, it is the one that most people associate with the Golden Ages of Japanese history - most especially the Heian Era.

Kyoto was founded over 1,200 years ago by the Emperor Kammu, the 50th Emperor of Japan, mainly to get away from the city of Nara, where the Buddhists were becoming more and more meddlesome in the affairs of state. Emperor Kammu briefly settled in Nagaoka, an area to the west of Kyoto, but left soon after due to a variety of inauspicious events1.

The city became the imperial capital in the year 794, and was named Heiankyo - 'Peace Capital'. It remained the capital of Japan until the Meiji Restoration in 1868, when the capital was moved northeast to Edo, which was renamed Tokyo. Many Kyoto natives are still bitter about the move, and believe that the city's status as capital should be restored. This is not likely, however.

Kyoto is noted throughout Japan as being a sort of cultural repository of all things Japanese. Spared bombing by the Americans during World War Two, it still has an abundance of centuries-old temples and shrines, as well as traditional Japanese machiya houses. While development is slowly overtaking the traditional Japanese homes, the city gives a stipend to machiya owners if they agree to keep the houses in their original style.

Many traditional Japanese cultural crafts have their birthplace in Kyoto, the most notable of which is Kabuki. The Minami-za theatre on Shijo street is considered to be one of the premier kabuki venues in the country. Also along this street, indeed most of the surrounding area east of the Kamo River, is the neighbourhood of Gion, where the iconic geisha and maiko (apprentice geisha) entertain hand-picked customers2.

Along the eastern mountains of Kyoto - Higashiyama - there are dozens of temples and shrines, which attract millions of tourists a year. Some of the most famous are:

And that's just in the Eastern mountains. Visitors could spend days in this city and never go west of the Kamo River, but if they did, they'd be missing a lot. Nearly everything.

The city is home to four great festivals that are famous throughout Japan. The oldest is the Aoi Festival, which dates back to the Heian Period, and takes place on 15 May. Similar to the Aoi is the Jidai Festival, on 22 October. It was established after the relocation of the capital to Tokyo, and recounts 1,200 years of the city's history.

The Gion Festival is the most interesting and well-known of the four. It officially takes place during the month of July, but is most visible for four days preceding 17 July. Most of the roads in the center of the city are shut down so that people can walk among the ornately-decorated floats - yama and hoko - that will be pulled through the city on the morning of the 17th. This festival was originally held in the 9th Century to beseech the Gods to end a plague on the city. It's one of the most famous festivals in Japan.

The fourth festival is the Daimonji Festival (more accurately, go-zan okuribi), where great bonfires are lit on the mountains around the city, forming the shapes of five Chinese characters. This event is held on 16 August.

In contrast with its famous temples and shrines, modern Kyoto is a blur of people, taxis and shopping, with the most active area in the city being bounded by Shijo street to the south, Sanjo street to the north, Karasuma Street to the west, and Ponto-cho to the east. Old and venerable department stores can be found here, such as Takashimaya, Hankyu, and Daimaru, as can long shopping arcades such as Teramachi and Shinkyogoku. While the city may not have the vast variety in shopping that Osaka does, or the international fashion of Kobe, there are many ways to spend your money in Kyoto, often on items that can be found nowhere else in Japan.

1Including, but not limited to, flooding, war, assassinations, plague, famine, forced labour, and corruption.2Kyoto is the home of this old, but dwindling, art form. Dinner with a geisha is by invitation only, but tourists can, for about 10,000 yen, get dressed and made up as a geisha or maiko.