Etiquette for Tennis Spectators Content from the guide to life, the universe and everything 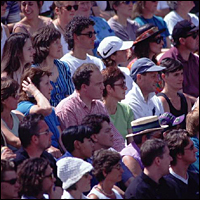 So you want to be a tennis spectator? Getting a ticket isn't that easy as the major tournaments allocate to those with some sort of connection to the sport. However, there is an allocation for most of these tournaments made available to the general public - after all, it's everyday people that give the atmosphere that makes the tournaments what they are. But with so many of the establishment of the sport around, you'll undoubtedly want to know how best to behave in their presence.

The current trend started by the Australian and Swedish spectators is to use coloured sunscreen or body paint to mark out the identity of the player you're urging on to win. This can take the form of just painting the face (if the weather isn't too warm), to works of art that use the whole torso or a group of torsos to spell out the name of the favoured player - as long as it isn't Ivanisevic. These are a most vociferous set of spectators who, along with the American support, make a great deal of noise round the tennis circuit.

Noise is good. Muffled cheers from neighbouring courts can inspire players to try and raise the same level of response from those watching them play. But be wary. Don't get too excited during a rally; wait until the ball is dead. What you may think is a dead ball - and one that looks unable to be recovered - might just be chased down by a very determined player. In addition, the cheers may have persuaded the other player that they may indeed have won the point, and therefore they may not fully concentrate on getting in one more return.

This of course takes on a whole added intensity when, instead of an individual player in a tournament, national pride is a stake in a team competition. The most famous and leading example of cheering on your team is undoubtedly the Davis Cup. When this tournament first started, home court advantage could only be gained through selection of surface to favour the home players or hinder the opposition. Now an added element taken into consideration is the crowd impact. These occasions are now raucous affairs with the crowd being lead on by the non-participating members of the team egging the crowd on the ever-increasing levels of partisan support. This level of noise is of course greatly enhanced if the match is played in an indoor arena, especially as now the surface can be selected for such arenas to best suit the strengths of most players.

This is a phenomenon particular to racquet sports, because of the size of the playing area and the speed of action over that playing area. It basically occurs as spectators naturally strain to follow the main action, and in particular, the ball, as it traverses the net. It is a natural instinct and large portions of the crowd will all be looking at exactly the same point of the court - the little yellow ball - at all times. This is only evident if you are seated on the sidelines, as from the baseline you are more likely to appear to be nodding throughout the duration of the match.

There are, of course, other ways that a game of tennis could be watched, such as watching one of the players and how they move to receive, stroke and anticipate the next ball. But the great fear in watching a match in this way is that you are going to miss some important action at the other end. So no matter how well disciplined you think you may be you'd better be prepared for having a sore neck, or getting a good neck massage at the end of a days' spectating.

Events are either indoors (where the weather is not a concern) or outdoors (where it can be)1 So if you are going to an outdoor event and are not 100% sure of the weather, here is a list of essential equipment to take in case of adverse weather.

Tennis crowds are extremely close to the action so the slightest movement can be off-putting. Of course there will be times you will have to move - too much hospitality is going to play havoc with your bladder control - but do it when it's allowed. For instance, people can move from their seats when the players are changing after every two games, one service game for each player or double partnership. The stewards will be stopping you from returning to your seat once the players are ready to resume play, but before they stop it's up to you to remain in your seat. When the time does come and the second game is over, move swiftly and directly to your nearest exit (they will link up to where you actually want to get eventually), as you only have 90 seconds before play has to resume.

While you are in your seat try not to get too comfortable, especially if you're a snorer and have been queuing or travelling a long time to get in. There's nothing worse than being asked from the umpire's chair to wake up to stop putting the players off.

Neither of these should be used during a match. Flash photography is very distracting, especially as the long evening shadows draw over the court at the end of the day. You certainly don't want your photograph to cause the momentary lapse in concentration that might cause an important point in a key game to be lost and affect the result. If you have an automatic flash that cannot be turned off, make sure you take your photos early on in the day before the light gets too bad. After all, you're still allowed a memento of your day at the tennis courts.

Interestingly enough, mobile phone did once go off in a John McEnroe game, but fortunately it was while he was playing his younger brother Patrick. It occurred at Patrick's end of the court so he went to pick it up and said 'John, it's Mom', to which his brother replied 'Ask her what's for dinner'. It was, in fact, an hilarious event at the time, but mobile phones have become a lot more popular since then, and there's nothing worse than one going off and spoiling the concentration of a highly focused sportsperson. If you have to have a phone waiting for a call, then have it on silent or vibrate and call back at the change of ends.

Though the etiquette of queuing is largely confined to Britain, it has become an art form at the Championships at Wimbledon - every day, up to and including the singles quarter finals, there are tickets available on the two main show courts, and there are tickets available to the general public on a first-come-first-served basis. In addition, tickets to the grounds and outside courts are available every day.

Obviously, at the start of the fortnight over which the championships are held, you can easily watch good matches on the outside courts and get a good day's entertainment for the minimum amount of expense - that is, unless you want to see a particular match on a show court. So you can quite easily turn up at a reasonable time of the morning and still secure a choice of show court ticket when you get to the front of the queue. Of course, the more important the matches the greater the demand, so you'll have to turn up earlier and have to camp out to ensure you have the choice of the matches you want to see.

When the queue for the next day starts to form - this is even before the play of the previous day has concluded - there are stewards marshalling the queue giving out numbered tickets. This is especially important in the overnight queues as people obviously need space to set up their tents, sleeping bags and deck chairs to get comfy for spending a night on the pavements of SW19. There are, in fact, two queues at Wimbledon, their final destination being at opposite sides of the grounds. One queue wraps round the hospitality tent village end of the grounds, crosses the road and goes up the hill at Church Road. The start of the other queue sees the other queue head towards it before it heads down the road towards Southfields underground station, but winds it way into the adjacent golf course which actually serves as the car park for the period of the championship.

The start of both queues is barricaded in, but after a while the queue just forms up along the pavement. This is why the numbered tickets are important. Further down the queues some people do actually attempt to jump into the queues that haven't braved the elements overnight or since the early hours. At certain points along the queue as it approaches the ticket office the order of the numbers is verified by stewards to ensure the queue is still in order. So queue jumpers are held until they should enter the queue.

The services provided to the queue are really quite good. The number on your ticket does of course mean that you can disappear for a while when nature calls, and your fellow queuers do not mind as long as you don't go away for too long. In fact they may get worried and send a search party into the portable toilet blocks if you are gone too long. In the morning the vendors start to turn up, and you can purchase your morning paper and strawberries for breakfast without having to leave the queue. You still have a long wait from when the queue does wake up and start to move forward, so share your paper with others - swap them and get full reports of yesterday's matches in different papers.

The mentality of the queue is one of overriding friendship; your section of the queue has all been waiting for the same length of time. However, in that short space of time, you have developed a camaraderie that is somewhat unique at sporting events. So the enjoyment of your sporting day has starting from daybreak or earlier, and you're not really that tired when you finally get into your seat in the afternoon for the action to start.

If you are at one of the major tournaments there is bound to be corporate hospitality around in some form or other. If you are one of those who is lucky enough to be enjoying that hospitality there are some etiquette rules for you too:

But above all, enjoy yourself...

1The exception to this is the four Grand Slam events during the Australian Open, where on the main show court they have a sliding roof.