Luminaria - Outdoor Art Installations Content from the guide to life, the universe and everything 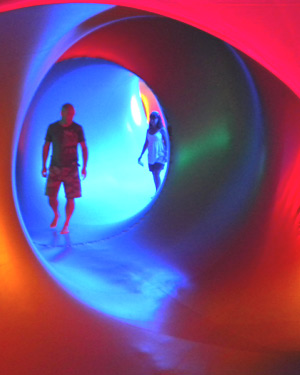 Despite what architects might tell you, nearly all buildings are created for purely functional reasons. If their creation happens to contain an element of aesthetic pleasure, then it's a bonus. Luminaria on the other hand are 'buildings' that are created with the senses foremost in the consideration. These giant, inflatable, portable structures bring a temporary sense of the fantastic and other-worldly to parks and open spaces. They make use of ambient light to create a brilliantly multi-hued and immersive experience.

How it All Started

Back in 1981, Nottingham-based artist Alan Parkinson had been working on a Nottingham community project to manage a team of offenders who were serving their punishment by working in the community. They had built a small inflatable mattress and were tasked with installing and maintaining it. As Parkinson himself relates1:

The community project was a charity initiated by Ethel Swann who was both a magistrate and a playworker in the Meadows. She had an interest to create a worthwhile project (the Windbag Inflatable Project) for offenders who had been given community service orders to serve their punishment in the community. Normally they'd be doing painting and decorating or gardening or suchlike. With the Windbag project they could work on inflatable construction or on supervising inflatables in their use by after-school groups, special schools, day centres, playschemes etc. I was employed initially just to drive a minibus containing inflatables and offenders for an afternoon a week. We'd then set up the structure in a community centre and supervise its use.

Parkinson realised that the design of the mattress could be improved, and so set about designing and building better inflatable structures. He was inspired to make walk-in environments by seeing a structure that had been made by a Leicester community project called Interplay. He didn't specifically build for theatre and dance companies - that came later when he realised that without a structured experience, children were just going to run around. So in 1990 he built a larger structure, Eggopolis, which would tour the UK providing a venue for theatre groups performing to audiences with disabilities.

Eggopolis covered an area of 518m2, was 8m tall at its highest point and consisted of a series of domes connected by tubular passages. The 'lune'-shaped window was a feature of the 'pods' - the niches at ground level around the structure. The 'spiral of life' motif, a decoration of the top of the central dome, drew inspiration from Islamic art.

In 1995, Eggopolis was invited to Edinburgh as an attraction in its own right for a fee-paying public. Critical and popular acclaim soon followed, so Parkinson created the company Architects of Air to produce and tour these remarkable structures. Eggopolis toured outside the UK and even travelled as far as Singapore before being retired in 1997.

Viewed from outside, a luminarium looks toyish, almost as if it were a hybrid of Brighton Pavilion and a bouncy castle. Once you've queued up at the entrance airlock2, paid the entrance fee and removed your shoes to avoid damaging the fabric, you enter into a womb-like space suffused with brilliant colours and ambient music. Even on a dull, overcast day, the colours are vivid and primary, but the effect is anything but overpowering. You can walk, sit or lie down and let the sensations wash over you. Many of the luminaria have specially patterned domes to enhance the effect of the light. You can stay in the structure for as long as you want, and there are always the small pods built into the fabric where several people can cluster for relaxation.

The structure is made from a special PVC, produced in France exclusively for Architects of Air. The panels are cut and the pieces assembled in a Nottingham workshop by a small team over a period of several months. When it's finished, the structure is hauled off to a sports hall to be inflated. A typical luminarium takes about 4 hours to set up from scratch, and is inflated with small fans, consuming the power of about 2 electric kettles. When the tour is finished, the structure can be deflated and packed for transport in as little as 90 minutes.

A luminarium will last for about 300 days of exhibition spread over about 4 years. When it comes to the end of its working life, it is cut into pieces and recycled.

At the time of writing, the company is now producing its 15th luminarium since 1990. Called Mirazozo, it takes much inspiration from Islamic architecture, as have several of its predecessors. Its unique feature is the dodecadomes: stellated dodecahedra with illuminated seams. Other luminaria include Amococo, AoA's biggest structure to date, which blends four  simple  primary  colours from its domes to create a rainbow of hues and shades. Ixilum is notable for its 'red tree', a gigantic glowing structure with red branches. Arcazaar, another large luminarium, premiered in Prague and saw 7,000 visitors in just four days.

How to Experience It For Yourself

You can experience a luminarium by checking the touring schedule. In the UK in 2010, AoA will be touring Levity II in Nottingham (naturally) and Mirazozo in Milton Keynes. They are also touring Ireland, Australia, Canada, Qatar, the US and Spain. For such a unique experience the entrance price is extremely reasonable. Small children love them, but to experience the sensations in peace and quiet, it's best to go during the working day if you can. The author can vouch for the benefits of experiencing a luminarium's unique sensations without having to block out shrill voices.

Lots of adjectives can and have been applied to luminaria: 'magical' and 'spiritual' are two of the most often used, although 'beautiful', 'relaxing' and 'sensual' are equally applicable. Are they 'art', though? Who gives a damn? Above all, these ephemeral and gratuitously sensuous creations are fun.

1The author would like to express his gratitude to Alan Parkinson, who readily supplied some quotes for this entry.2There is always a queue, but then it wouldn't be British if there weren't.