Arches National Park, Utah, USA Content from the guide to life, the universe and everything 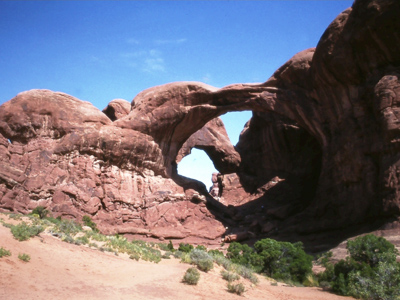 The Arches National Park is one of the most rewarding national parks to visit in the south west of the USA. Unfortunately for tourists with severe time constraints, it takes approximately one day by car to get there from the Grand Canyon National Park, so many round trips will leave it out, instead substituting the Natural Bridges Monument. However, it is the opinion of this Researcher that if you have seen some of the national parks in the area, you will get 'homesick' more for the Arches National Park than for the Grand Canyon. The Delicate Arch has even become the un-official state symbol of Utah.

Arches was established as a National Monument in 1929 by President Herbert Hoover and 'promoted' to a National Park in 1971.

Moab, Utah, situated on Highway 191, is the closest town. The entrance to the National Park is approximately 5 miles (8km) north of Moab. The nearest airports served by commercial airlines are Grand Junction, Colorado, and Salt Lake City, Utah. A Greyhound route travels along Interstate 70, with stops at Grand Junction and Green River, Utah. There are also some commercial van services between Salt Lake City and Moab, but as there is no public transportation from Moab to the park you'll have to rent some sort of vehicle anyhow.

Arches is basically a desert park, which means that the climate is extremely dry, but not necessarily hot throughout the year. On summer days the temperature will regularly exceed 100°F (38°C), whereas in winter it may drop even below 32°F (0°C). A day/night temperature range of more than 50°F (28°C) is not unheard of.

Today the Arches National Park covers an area of 76,519 acres (310 km²). Scattered over that area the visitor finds more than 2,000 catalogued arches of all sizes, ranging from tiny 3ft arches (the minimum size for an 'official' arch) up to the 306 ft (100m) of the Landscape Arch, which is the longest natural sandstone arch in the world.

The arches may have provided the name for the park, but many other formations are found within as well: pinnacles, spires, fins, balancing rocks, and more form a dramatic scenery against the backdrop of the La Sal Mountains1.

300 million years ago, the area that is now known as the Colorado Plateau was covered by oceans that finally evaporated, leaving a gigantic salt bed behind them. This saltbed, in places up to thousands of feet thick, was covered with sand and debris that was carried here by floods and winds. Over millions of years, most of that sand compressed into solid stone (thus sandstone). The weight of these layers of stone caused immense pressure on the saltbed below. Salt under high pressure is not stable, and the salt layer started to shift. It buckled and pushed some of the lighter rock layers into domes.

In other areas the rock layers were wrinkled like old thick leather that is exposed to the sun. As soon as the surface of the area was no longer intact, the natural erosion of sun, wind, water and frost started its sculpturing work. It is still active today.

Lifespan of an Arch

When the saltbed pushes the rock upwards, the wrinkles and vaults sometimes form huge fins that are cleared of loose material by wind and water. Most of these fins are degraded by the erosion, but some of them, with the right hardness and balance of the material, will withstand for quite a while. Erosion, anyhow, has some very hard teeth. it continues to gnaw at these fins, and sometimes it bites little holes through them. This is the birth of an arch. As time goes by, those holes will be enlarged by the erosion, and finally only a thin ribbon of rock may be the last reminder of a former fin (as is the case with Landscape Arch).

Does it make a difference at all? Yes, it does (at least for the geologists). An arch starts with a little hole that grows upwards, ie, the erosion bites off pieces from the top side of the hole. A natural bridge, on the other hand, is created by flowing water that digs deeper and deeper.

As in any hot and dry environment, life is slow here. Very slow. Sometimes it seems as if the dry heat had won its fight against the deplorable plants, but once the rain comes (rarely, but it comes) the desert explodes with blossoms. If you are lucky enough to go there when this happens, you'll get to see something that you'll never forget. But most of the time, vegetation has to reduce its metabolism dramatically. This makes it extremely vulnerable to intrusion; a single step beside the path may cause a setback of decades for the vegetation and especially for the cryptobiotic2 crust at the very bottom of the life chain. So the standard rule 'Take nothing but pictures, leave nothing but footprints' should be amended to 'Do not even leave footprints' in this particular case.

Camping in the Park

Devil's Garden campsite is open all year and operated on a first-come-first-serve basis. At the time of the writing, the fee is $10 per night. From March to October visitors have to pre-register at the entrance station. As there are only 52 sites, the campsite may be fully occupied even before 9am. Fees and rules may be subject to change.

1Remember the first scenes of Indiana Jones III when young Indy tries to save the Coronado Cross from some villains? Those scenes were shot in the Arches National Park, at the 'Double Arch' and the 'Park Avenue' in the 'Windows' section. But don't be disappointed if you don't find that cave and railway in the park.2Cryptobiosis: a physiological state in which metabolic activity is reduced to an undetectable level without disappearing altogether. It is known in certain plant and animal groups adapted to survive periods of extremely dry conditions.