The Legal Side of Death in England and Wales Content from the guide to life, the universe and everything 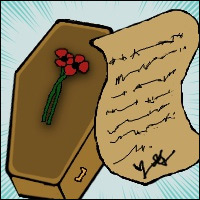 When someone dies, in addition to grieving and arrangements with undertakers, there is a lot of legal paperwork that sustains life and careers elsewhere. The papers are needed because they allow the bereaved to recover the deceased's mortal remains and finalise their estate, releasing it from the civil court. In common language, not legalese, 'probate' is the process for obtaining the power to disburse an estate, so that the beneficiaries can receive their inheritance, after the government has taken any share to which it may be entitled.

This Entry outlines the current UK process. More specifically it is the process used in England, Wales and, to some extent, Northern Ireland, as Scotland has a completely separate legal system and language, as well as property laws.

It is simplest, when someone has died, if the deceased has left a legal will. This has to be written by the loved one and witnessed. It costs at least £100 for a solicitor to draw up a simple will. More complicated estates are likely to cost more, but will save a significant amount in inheritance tax. Wills are a major tool in inheritance tax planning.

The will normally nominates an executor, who is the person who must sort out the estate. The executor is often a family member, and may be in line for an inheritance, also known as a legacy. In some cases the will may have appointed a solicitor as the executor, rather than a family member.

If the deceased did not leave a legal will, then they have died in what is called a state of intestacy. The process is more complicated, and many legatees1 may not even know of their potential inheritance. In this case the State takes the legacy and disburses it according to intestacy rules, and not according to the wishes of the deceased. It can happen that without a legal will, a spouse could find that the family home is inherited by a relative2, all for the sake of a £100 will. If there are no apparent heirs, the State will take the inheritance until such time as any heirs make themselves known.

Before you can bury, cremate or otherwise dispose of the mortal remains of the deceased, there are other legal formalities to follow. The National Health Service administers the first part.

In the 21st Century most people die in hospital, or sometimes a hospice. If someone dies at home, the family doctor will visit to confirm death and a funeral director will arrange to collect the mortal remains. Funeral directors usually have a 24-hour on-call service and are happy to come and collect the loved one from home. Most hospitals have a morgue where the body is kept until released for disposal. Apart from a very short journey, the body is already close to a funeral parlour, followed by another short journey, usually in a hearse, to a crematorium or graveyard.

The process of registering a death begins with a form, loosely called the 'cause of death form' or medical certificate. This is issued by a medical practitioner, usually in the hospital, to say the deceased is legally dead, that nothing suspicious happened and that the body may be handed over to an undertaker. It also avoids the complication and delay of a post-mortem examination and a coroner's court, with more forms. If the death occurred under suspicious circumstances, or the deceased had not been seen by a doctor during the previous two weeks, a post-mortem could be ordered by the coroner. (Usually, however, if someone dies at home of a terminal disease, and had not seen a doctor within the last two weeks, the coroner would authorise a medical certificate without a post-mortem).

The medical certificate is also taken to another government official, whose job it is to register the deceased's death and issue the death certificate. By this act, the Registrar of Deaths officially recognises the deceased's life has ended.

Financial institutions, including banks and pension providers, and legal practitioners, including the court granting probate, will need to see the death certificate. It will also be of interest to relatives researching their family trees in years to come. It pays to obtain four or five copies from the registrar because of its multiple uses.

The Probate Service of the civil court grants probate, meaning that the will has been formally accepted, and made public, the death certificate has been accepted, the deceased's assets have been assessed, and any liability to inheritance tax has been properly calculated and paid. What is left may be disbursed to those named in the will. That's it. Easy. However, getting to that point isn't.

Assessing the estate (the deceased's assets, less liabilities) is complicated, and will involve property, bank and building society accounts, personal goods and chattels, stocks and shares, insurance policies, businesses and possibly numbered accounts. On the debit side there may be unpaid taxes, unpaid loans and other debts of money, including overpaid pensions and the funeral expenses (which are allowed to be paid out of the estate). However, selling property is usually the biggest challenge, involving estate agents and solicitors.

Finally, having added up the pluses and minuses, and successfully completed the sum, the final figure, less any inheritance tax, is what the estate is worth to the beneficiaries. The court will then, after ensuring inheritance tax liability has been discharged, grant probate. This, another piece of paper, will be needed by the bank to set up a cheque account for the executors. (If the sum turns out to be a negative amount, advice from an accountant may be necessary).

The executors will then disperse the proceeds in accordance with the legal will, assuming there isn't a challenge from a disaffected relative or previously unknown family member. In that event, a lawyer may be needed to finalise the disbursement.

What Can Go Wrong?

Sometimes the process can go wrong, at any stage. In some cases, when the deceased's bank has to issue a cheque book and an account to the executors so that they may disburse the estate's funds, at the final hurdle, a mistake may be made. It has been known that receiving banks return the cheques written by the executors because the issuing bank forgot to enter the executor's signatures on their system. This can lead to many months of anguish, hugely expensive unauthorised overdrafts and recourse to the financial ombudsman to recover lost interest and compensation.

The process is well documented and it is relatively easy when things do not go wrong. And it takes your mind off the other, really painful part of death and coping with bereavement.

1Those who are in line for a legacy.2Although sometimes a legal will can be changed by a 'deed of variation' if all the inheritors agree.